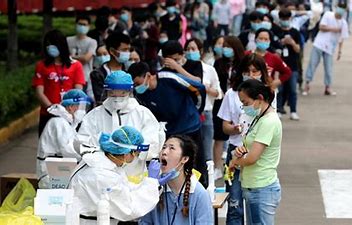 If Shanghai were a U.S. state, it would rank third in population. It has millions more people than Florida does. That’s how big it is. At last check, it was the third-largest city in the world.

What do you get when you introduce a hyper-contagious variant into a dense, hugely populous municipality in a country whose senior citizens are undervaccinated?

We’re about to find out.

China is spooked by the outbreak in Hong Kong, which pulled off a “zero COVID” strategy successfully for nearly two years. As February began, the city was averaging fewer than a thousand cases per day. A month later, the number had climbed to 65,000 per day. Over the last few weeks Hong Kong experienced one of the worst rates of death per capita on Earth, a function of the fact that many elderly residents hadn’t had their shots.

All of those same conditions now obtain in China. “Data from Chinese Government shows that over 52 million people aged 60+ haven’t been vaccinated with any Covid vaccine. Booster rates also low; only 56.4% of people age 60-69 having received booster shot, and 48.4% of people age 70-79,” Scott Gottlieb tweeted this morning.

Embers of the virus are already burning in Shanghai. The city is so important financially and economically to China that the local government had vowed not to implement any citywide lockdowns in the interest of keeping businesses humming, but the situation has become too dangerous. “Shanghai detected another 3,500 cases of infection on Sunday, though all but 50 were people who tested positive for the coronavirus but were not showing symptoms of COVID-19,” the AP reported. China needs to snuff transmission before the whole forest goes up. So they’ve ordered a two-stage lockdown to accommodate authorities’ testing capacity: The eastern half of the city will be shuttered for five days while mass testing is carried out, then the western half of the city will close while testing is carried out there.

As you might imagine, locals are eager to stock up before the lockdown begins.

This is the scene in #Shanghai as the ENTIRE city has been placed under lockdown due to covid.

This has led to widespread panic buying and some food shortages across the city.

Huge crowds in supermarkets seems like a bad idea at a moment when the city is worried about stealth transmission but the Chinese haven’t faced a threat like this since the original Wuhan outbreak. A lockdown that’s supposed to last less than a week could turn indefinite if case counts don’t cooperate, and residents know it. More from the WSJ:

On Monday, barricades were seen splitting up the city, while many metro services and bus lines were suspended. Companies including Tesla Inc. suspended manufacturing for four days…

Wu Fan, an adviser to the city’s Covid-19 task force, said Monday that an analysis of previous screening results showed there was citywide sporadic spread in Shanghai, raising the prospect of a more extensive outbreak…

Shanghai’s municipal government said factories were allowed to continue operating under what it calls a “closed-loop production,” or a bubblelike environment in which staff could keep working, living and staying within the factory campus…

Videos on social media showed an exhibition center converted into a makeshift care facility, with hundreds of beds in a large hall. Government task forces said they would ensure food supply, mandating a state-owned vegetable group to transport fresh produce across the city.

If there’s an “extensive” outbreak under way, I don’t understand the logic of delaying the lockdown for the western half of the city. A “zero COVID” approach should mean near-zero tolerance for movement around the city until the threat has passed. It seems China is trying to use a light touch in Shanghai, however, because of its role in global commerce. Its port, the world’s biggest, is still open. Its semiconductor factories are still active, although workers may be confined to the premises. Its airports and rail stations are functioning and China is allowing people to leave with proof of a negative test within the prior 48 hours. Still, there’s no way to avoid supply-chain disruptions as the lockdown begins to bite at warehouses and commercial transport. Some truckers are avoiding Shanghai now, says the WSJ, because they don’t want to end up quarantined.

That may be the best-case scenario here — little loss of life but yet another disruption to the supply chain that pushes inflation up a bit further.

China isn’t the only country worried about a major outbreak at the moment. Another prime candidate for a terrible wave is … Ukraine. And Russia bears even more blame for that than you might think.

Long before Russia launched its military assault on Ukraine, its citizens had been targeted for years by another Russian campaign — one designed to undermine confidence in Western vaccines and the governments offering them to their citizens.

The anti-vaccine messages were actively encouraged by President Vladimir Putin’s government, broadcast by Russian state television, and amplified on social media by Russian computer bots. The offensive was part of a larger effort to sow division within fledgling democracies and heighten suspicion of the West across Eastern Europe and the former Soviet republics.

In Ukraine, the seeds of vaccine skepticism fell on particularly fertile ground. Just 35% of residents are fully vaccinated against COVID-19, and only 1% more are partially vaccinated — among the lowest such rates in Europe, according to data from Oxford University. Childhood immunizations for diseases like measles and polio are among the continent’s lowest as well.

Ukrainians crowded together in poorly ventilated bomb shelters are kindling for an outbreak, as are those congregated in foreign refugee processing centers. COVID’s not their only worry either: The country has “alarmingly high” rates of HIV and hepatitis C. Many Ukrainians with those diseases are now refugees, their treatments disrupted, forced to rely on the health-care system in poor countries like Moldova. Not everyone who manages to dodge Russian bombs and bullets will survive the war.

Here’s Gottlieb sizing up the Shanghai outbreak and noting China’s stubborn refusal to produce the Pfizer vaccine when it had the chance. That was probably a function of nationalist pride, not wanting to stoop to relying on a vaccine made famous by an American company. Good luck to the city’s elderly.

“They will have a very hard time containing this,” says @ScottGottliebMD on Shanghai’s Covid-19 lockdown. https://t.co/4JniO5Xta6 pic.twitter.com/xV2XmP7ea9

ISIS-K: The most brutal Terrorist Group