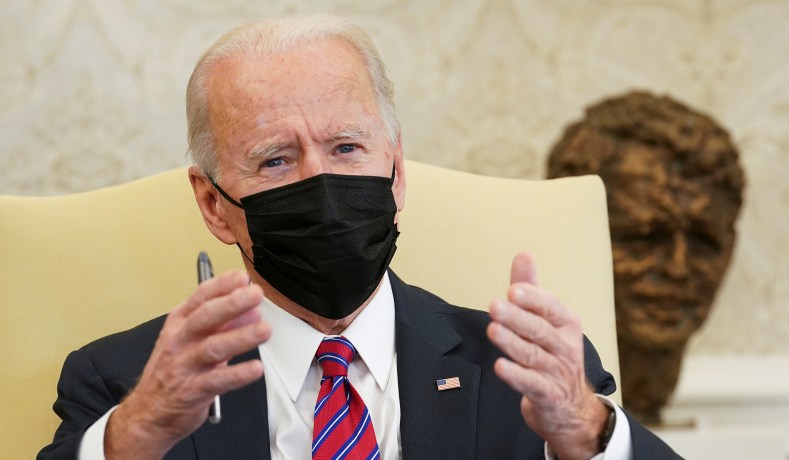 At the beginning of February, ten Republicans offered a bipartisan COVID-relief bill that was significantly smaller than what Joe Biden wanted. Biden met with the Republicans, said he had a good meeting, but rejected the offer:

The Republican plan offers no assistance to state and local governments, one of the items that a Biden adviser described as “must-haves” for Democrats in Congress.

According to details released by the lawmakers, the Republican proposal also falls short on another must-have by offering only $1,000 in direct payments to Americans, compared with the $1,400 sought by Biden.

The Republican proposal also did not include a $15 per hour minimum wage.

Since then, the Senate parliamentarian rejected the provision for the $15 per hour minimum wage and the White House is reportedly accepting a lower income cap on the direct payments:

The proposal would disqualify individuals earning more than $80,000 — and households whose incomes exceed $160,000 — from receiving stimulus checks of up to $1,400, lowering the individual income cap by $20,000 from the last round of direct payments and from the version of the aid plan passed over the weekend by the House.

The version that Democrats will pass, with 51 votes to 50 in the Senate, and on a likely party-line vote in the House, will be a larger package than that bipartisan proposal Republicans offered last month. But Biden will have passed a bill that will probably be deemed too expensive and insufficiently focused by the likes of Susan Collins and Lisa Murkowski. And it took the first two months of his presidency to do this. As I noted earlier this week, Biden’s relief bill will probably pass about a month later than Obama’s did.

But at some point, Biden might start wondering whether he would have been better off taking that early offer from Republicans, starting off his presidency with a big bipartisan win and pocketing the political capital from that deal and moving on to other issues.

The US economy is in a perplexing state of labor market...