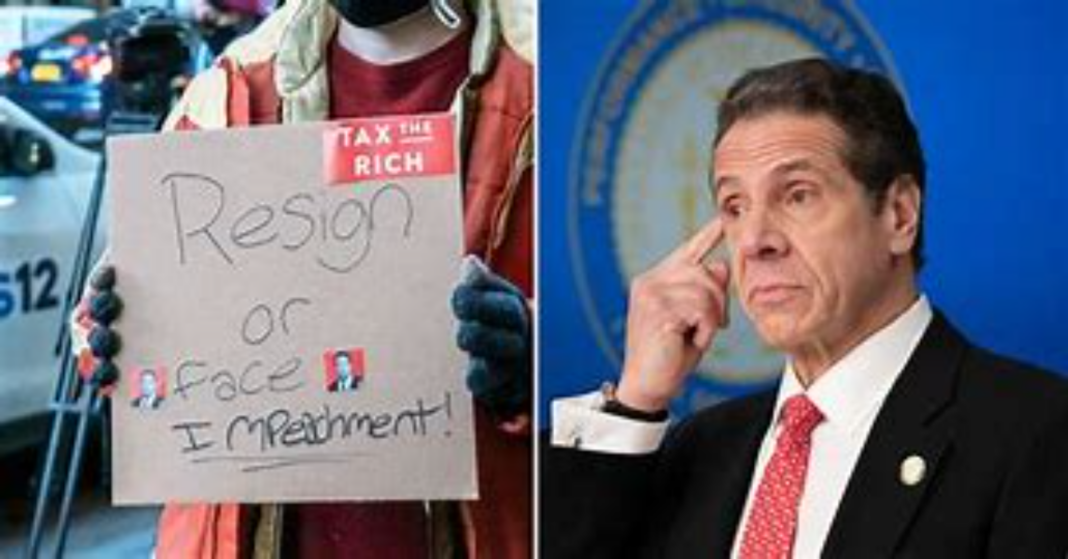 One of the weirdest people to ever hold high office in the United States.

Probably one of the worst too, although that competition is stiff. But weirdest? No question.

This clip unfortunately doesn’t capture the weirdness of his full remarks today. He began by grumbling that the harassment accusations against him were really just a series of misunderstandings about what was and wasn’t appropriate between the sexes, something he attributed partly to age. One Twitter pal compared it to Phil Hartman’s “unfrozen caveman lawyer” defense. Then he went into Colonel Jessup mode, saying he’s inclined to fight and even telling viewers “It is your best interest that I must serve.”

And then … he quit. He loves you, his constituent, too much to stand in the way of the important government business of fighting COVID.

Cuomo announces he is resigning as governor of New York pic.twitter.com/QtAjBrWLpI

Nursing-home residents all over New York are sighing with relief. “It’s as if Col. Jessup delivered his ‘on the wall’ speech, admitted no wrong, but then resigned his commission in the middle of Tom Cruise’s cross-examination,” said Ed to me in a text about the unexpected ending to Cuomo’s speech.

Reporters who have covered him for years are shellshocked:

If you have covered Cuomo even for a short time, it is stunning that he’s stepping down instead of fighting something out. He’s going down claiming innocence but he is not going down fighting.

I think we’ll find that it was Melissa DeRosa’s departure that finally convinced him to quit. It’s one thing to be in the bunker, it’s another to be in the bunker all alone, without your most trusted lieutenant. All of his troops were surrendering, including his top general. You can’t fight a war alone.

Sixteen months ago he was the darling of the Democratic Party, a supposed model of responsible pandemic leadership in contrast to Trump. Some Dems fantasized about him replacing Biden as nominee. Other Dems fantasized about him, period. Sixteen months later, buried under multiple scandals, his career ends in disgrace. In the end, even most of the “Cuomosexuals” had deserted him. What a spectacular, and richly deserved, collapse.

Stand by for updates.

Update: It’s been a long road to justice for Janice Dean, who lost both of her in-laws to COVID last spring. They were living in assisted-living facilities and were victims of Cuomo’s infamous policy of returning infected patients to their nursing homes in order to preserve hospital capacity.

He. Is. Out. God bless America.

Update: Imagine if he’d hung on and we had to spend the next month listening to rationalizations like this while the state assembly geared up for impeachment:

“The governor did not mean to grope her” pic.twitter.com/G5p6tegnVB

Update: Been quite a run for New York. Remember Eliot Spitzer?

Cuomo capping off a run for New York in which the prior elected governor resigned, the LG who took over in the interim didn’t run for re-elect over scandals, the previous AG resigned over abuse allegations, and the top D and R legislative leaders went to jail in corruption cases

Update: This may not be the final chapter in Cuomo’s disgrace. Don’t forget that prosecutors are still looking at him:

He still faces criminal investigations into his conduct by prosecutors in several counties, including New York, as well as an ongoing federal investigation by the U.S. attorney in Brooklyn into the administration’s handling of nursing homes during the coronavirus pandemic. The New York attorney general is separately probing whether the administration misused public resources it provided Cuomo relatives and other well-connected New Yorkers with preferential coronavirus testing and aides helped him write a book last year that netted him more than $5 million.

Update: I wonder what changed to finally convince Cuomo to give up. Just last night WaPo reported that aides had spent days trying to convince him to quit with no luck because he thought he’d be able to disprove the allegations made against him in the AG’s report. “He is in denial,” said one advisor. “It would be a waste of time to even try to talk to him at this point.”

Less than 24 hours, he’s out. Did DeRosa convince him? Apparently she visited the governor’s mansion yesterday for several hours, the day after she resigned.

Update: One Cuomo down, one to go.

WAPO just reported that @CNN’s Chris Cuomo is continuing to advise his brother.

Two months ago he acknowledged on air this was “inappropriate” and said, “It will not happen again.” https://t.co/LL4A3kpooN pic.twitter.com/ygLgb0UOiv

Update: Next year’s gubernatorial election in New York is now wide open. The incoming governor, Kathy Hochul, will be the first woman to lead the state in New York history. That could make it tricky for ambitious young male pols to challenge her, but her low profile means that there are plenty of better-known pols around the state who could have a leg up on her. Tish James, the attorney general, must be thinking hard about running right now. And maybe AOC?

I agree with Governor Cuomo’s decision to step down. It is the right thing to do and in the best interest of New Yorkers.

As someone who has served at all levels of government and is next in the line of succession, I am prepared to lead as New York State’s 57th Governor.

Annoyed Trump storms out of interview after Piers Morgan confronts him...

Flu shot and a Coronavirus vaccine offered at the same time