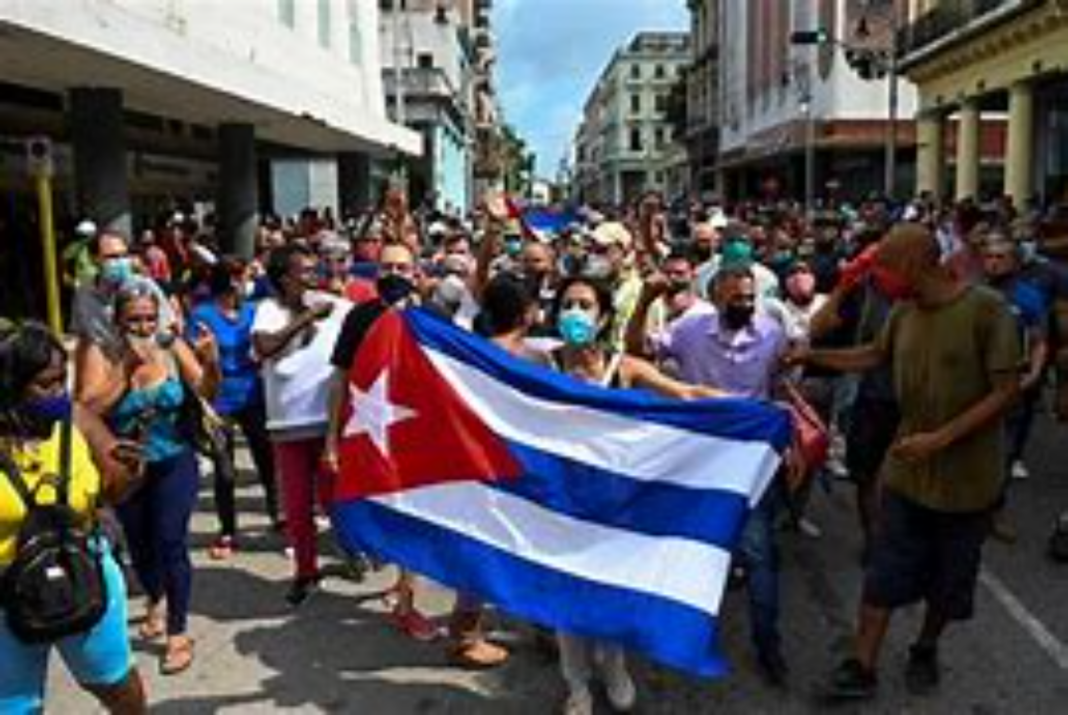 HAVANA — Thousands of Cubans marched on Havana’s Malecon promenade and elsewhere on the island Sunday to protest food shortages and high prices amid the coronavirus crisis, in one of biggest anti-government demonstrations in memory.

Many young people took part in the afternoon protest in the capital, which disrupted traffic until police moved in after several hours and broke up the march when a few protesters threw rocks.

Police initially trailed behind as protesters chanted “Freedom,” “Enough” and “Unite.” One motorcyclist pulled out a U.S. flag, but it was snatched from him by others.

“We are fed up with the queues, the shortages. That’s why I’m here,” one middle-age protester told The Associated Press. He declined to identify himself for fear of being arrested later.

Cuba is going through its worst economic crisis in decades, along with a resurgence of coronavirus cases, as it suffers the consequences of U.S. sanctions imposed by the Trump administration.

An official in the Biden administration tweeted support for Sunday’s demonstrations.

“Peaceful protests are growing in #Cuba as the Cuban people exercise their right to peaceful assembly to express concern about rising COVID cases/deaths & medicine shortages. We commend the numerous efforts of the Cuban people mobilizing donations to help neighbors in need,” tweeted Julie Chung, acting assistant secretary for state for Western Hemisphere affairs.

Cuba’s director general for U.S. affairs, Carlos F. de Cossio, dismissed her remarks in his own tweet: “US State Department and its officials, involved to their necks in promoting social and political instability in #Cuba, should avoid expressing hypocritical concern for a situation they have been betting on. Cuba is and will continue to be a peaceful country, contrary to the US.”

The demonstration grew to a few thousand in the vicinity of Galeano Avenue and the marchers pressed on despite a few charges by police officers and tear gas barrages. People standing on many balconies along the central artery in the Centro Habana neighborhood applauded the protesters passing by. Others joined in the march.

Although many people tried to take out their cellphones and broadcast the protest live, Cuban authorities shut down internet service throughout the afternoon.

About 2 1/2 hours into the march, some protesters pulled up cobblestones and threw them at police, at which point officers began arresting people and the marchers dispersed.

AP journalists counted at least 20 people who were taken away in police cars or by individuals in civilian clothes.

“The people came out to express themselves freely, and they are repressing and beating them,” Rev. Jorge Luis Gil, a Roman Catholic priest, said while standing at a street corner in Centro Habana.

About 300 people close to the government then arrived with a large Cuban flag shouting slogans in favor of the late President Fidel Castro and the Cuban revolution. Some people from the group assaulted an AP videojournalist, disabling his camera, while an AP photojournalist was injured by the police.

Demonstrations were also held elsewhere on the island, including the small town of San Antonio de los Banos, where people protested power outages and were visited by President Miguel Díaz-Canel. He entered a few homes, where he took questions from residents.

Afterward, though, he accused Cuban of stirring up trouble.

“As if pandemic outbreaks had not existed all over the world, the Cuban-American mafia, paying very well on social networks to influencers and Youtubers, has created a whole campaign … and has called for demonstrations across the country,” Diaz-Canel told reporters.