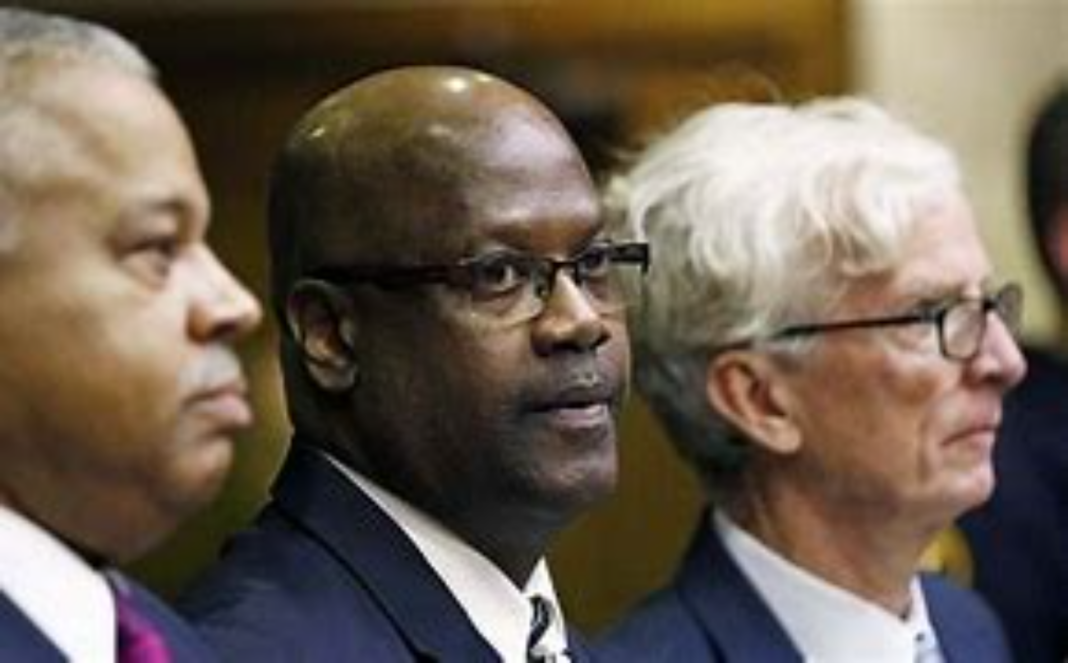 JACKSON, Miss. — A Mississippi man freed after nearly 23 years in prison filed a lawsuit Friday against the district attorney who prosecuted him six times in the killings of four people at a small-town furniture store.

Curtis Flowers was released in December 2019, about six months after the U.S. Supreme Court tossed out the conviction and death sentence from his sixth trial, which took place in 2010. Justices said prosecutors showed an unconstitutional pattern of excluding African American jurors in the trials of Flowers, who is Black.

The lawsuit filed Friday also names as defendants three investigators who worked with Montgomery County District Attorney Doug Evans. The county is not named as a defendant.

The suit says Evans and the investigators engaged in misconduct, including “pressuring witnesses to fabricate claims about seeing Mr. Flowers in particular locations on the day of the murders” and ignoring other possible suspects.

The Associated Press left a phone message for Evans in his office Friday seeking a response to the lawsuit. The call was not immediately returned.

The lawsuit does not say how much money Flowers is seeking, leaving that decision to a jury.

“Curtis Flowers never should have been charged,” one of his attorneys, Rob McDuff of the Mississippi Center for Justice, said in a news release Friday.

McDuff said the killings “were clearly the work of professional criminals” and Flowers, who was 26 at the time, had no criminal record.

“The prosecution was tainted throughout by racial discrimination and repeated misconduct,” McDuff said. “This lawsuit seeks accountability for that misconduct.”

In March, a judge ordered the state of Mississippi to pay Flowers $500,000 for wrongful imprisonment — the maximum under a state law that allows up to $50,000 a a year for 10 years. The did not preclude Flowers from suing the district attorney and investigators, his attorneys said.

Mississippi Attorney General Lynn Fitch said in September 2020 that Flowers would not be tried a seventh time because prosecutors no longer had credible witnesses and evidence was too weak for another trial. Fitch took office in January 2020 and took control of the case after Evans stepped away from it.

Four people were shot on July 16, 1996, in the Tardy Furniture store in Winona. They were owner Bertha Tardy, 59, and three employees: 45-year-old Carmen Rigby, 42-year-old Robert Golden and 16-year-old Derrick “Bobo” Stewart. Tardy, Rigby and Golden died at the scene, and Stewart died about a week later.

Relatives of some of the victims have maintained their belief that Flowers is the killer. Attorneys for Flowers say he is innocent.

Flowers was convicted four times in the slayings: twice for individual slayings and twice for all four killings. Two other trials involving all four deaths ended in mistrials. Each of his convictions was overturned.

The 2019 Supreme Court ruling came after American Public Media’s “In the Dark” investigated the case. The podcast recorded jailhouse informant Odell Hallmon in 2017 and 2018 recanting his testimony that Flowers had confessed to him. Hallmon’s story of the confession had been key evidence in later trials, but he told the podcast on a contraband cellphone from behind bars that his story was “a bunch of fantasies, a bunch of lying.”

The podcast also presented an analysis finding a long history of racial bias in jury selection by Evans, and found evidence suggesting another man may have committed the crimes.

After the June 2019 Supreme Court ruling, Flowers was moved off death row at the Mississippi State Penitentiary at Parchman and taken to a regional jail. He remained in custody because the original murder indictment was still active, and a judge released him on bail that December.

Winona sits near the crossroads of Interstate 55, the major north-south artery in Mississippi, and U.S. Highway 82, which runs east to west. It is about a half-hour’s drive from the flatlands of the Mississippi Delta. Among its 4,300 residents, about 54% are Black and 41% are white.