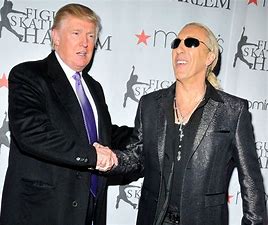 There’s a new wave of extreme or “ULTRA” MAGA hate, and it’s thanks to bumbling Joe Biden, who is on a campaign to divide the country even further, by calling anyone who identifies as “MAGA” an evil fascist. Basically, Joe Biden is spreading ANTIFA messaging, if you can believe that one. So, of course, this dementia patient is the “dear leader” for these zombie liberals, so they’re now spewing out Joe’s hate, on top of their own. It’s dangerous to be a “MAGA Republican.” Just ask Marjorie Taylor Greene, because while Joe is spreading hate against her, she’s being “swatted” by violent left-wingers who are trying to get her killed.

And one of those violent and really dark and hateful left-wing nutjobs is none other than Dee Snider, the former lead singer of the one-hit-wonder pop band “Twisted Sister.” He went off on a foam-at-the-mouth tirade about Trump supporters using his song “We’re Not Gonna Take It” at rallies or whatnot.

What a completely unhinged kook this guy is.

Here’s what Dee Snider said in a viciously nasty tweet: “ATTENTION QANON, MAGAT FASCISTS: Every time you sing “We’re Not Gonna Take It” remember it was written by a cross-dressing, libtard, tree hugging half-Jew who HATES everything you stand for. It was you and people like you that inspired every angry word of that song! SO FUCK OFF!”

Now, look underneath at the video posted by journalist Arthur Schwartz. It’s Dee Snider, singing “We’re Not Gonna Take It” for The Trump family, before they got into politics.

And look how happy and excited Dee is… awww.

What an idiotic hypocrite and fool this guy looks like… and I love it.

Here’s what people are saying:

“He is like the other entertainers. They had no problem, partying with him, eating his food, taking his money until he ran as a Republican.”

“Do these frauds know how dumb they look and they just don’t care?”

“Dee’s never looked happier than when he’s with the Trumps.”

“Ouch. Dee got smacked down HARD and FAST with that one LOL”

“Well, that didn’t take long to totally backfire in Dee’s face, did it?”

“This guys got one shitty hit song, he should be thanking God anyone plays it”

“I did not know he was still alive. Poor lost soul.”

“This is what Stage 5 TDS looks like, and it’s scary”

Ironically, Dee Snider is the guy who, back in the 80s, was fighting against Al Gore’s wife, Tipper, who was censoring music.

I guess he’s now a good little communist because he supports censoring people now, too.

University Of Michigan: Racism, Sex Abuse and the removal of names...