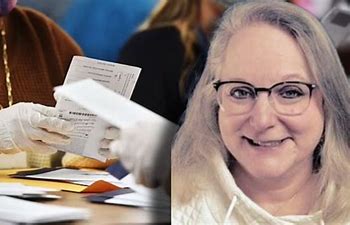 Imagine what would happen if we actually investigated the 2020 election across the board in a comprehensive way.

Just imagine what we’d find…it’d be a political bloodbath.

Instead, little “truths” leak out here and there, and we just start to get a small look at what the entire sham looked like.

We’re told by Dems all the time that voter fraud isn’t real… which is obviously absurd, and when they do finally admit it — because fraud is everywhere — we’re told there wasn’t “enough” to change the outcome of the 2020 election, even though there’s never been a proper investigation.

None of it makes sense, except to say that there’s a massive “coverup” underway.

Daily Mail reported that a former township clerk and current county elections supervisor in Michigan has been charged with ballot tampering in the state’s August 2020 primary.

State prosecutors say Funk was Flint Township’s clerk when she purposely broke a seal on a ballot container. In doing so, they allege, she prevented votes inside from being counted in an anticipated recount, under Michigan law.

Funk was seeking re-election as clerk at the time, and won with 2,698 votes compared to 2,619 challenger Manya Triplett, MLive.com-The Flint Journal reported.

She ran as a Democrat, and held onto her position until November, when she announced she was taking a job as elections supervisor in the Genesee County Clerk-Register John Gleason’s office.

Funk has kept her job at the county despite a Michigan State Police investigation into her conduct in August 2020.

She is due back in Genesee District Court on Monday, when her attorney Matthew Norwood said she will plead not guilty to the charges against her.

If convicted, she faces up to 10 years in prison.

Fun denies all the charges, and plans to please “not guilty.”

Why does it seem like 99.9 percent of the voter fraud involves Democrats?