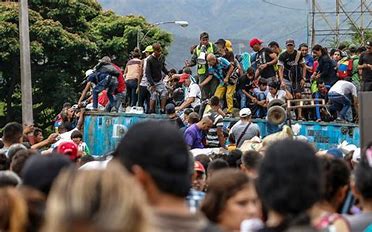 Maybe the Democrats should have included Kamala in the loop since she is supposed to be the border czar, appointed by Biden. Even clueless Senate Democrats likely realize how inept Kamala is on handling just about anything she’s been tasked with that her boss doesn’t want to deal with. At a time when the southern border remains far too porous, thanks to Biden’s border crisis, the Democrats want to offer special status to migrants from El Salvador, Honduras, Nicaragua, and for the first time, Guatemala. Those countries are commonly known as the Northern Triangle and the countries from which most of our illegal migration originates. The Democrats site the coronavirus and natural disasters like hurricanes as the reasons Central Americans are fleeing their home countries in record numbers.

“The crisis in Central America is urgent,” reads the letter from Senate Foreign Relations Committee Chairman Bob Menendez, of New Jersey, and 32 Democratic colleagues. “The effects of the natural disasters and the COVID-19 pandemic have profoundly exacerbated food insecurity, violence, and led to rising social tensions. Forced displacement continues to plague the region.”

Democrats say drought has led to food insecurity and farmers in the region face the worst dry farming season in 35 years, according to the World Food Program.

“The Biden administration must act and provide certainty for eligible individuals from Central American during this challenging moment. These temporary designations would give the U.S. government more time to partner with governments and civil society in the region to ensure that the return of a large number of individuals to Central America does not create further instability and volatility,” according to the letter, which was signed by Senate Majority Leader Chuck Schumer, both California Sens. Dianne Feinstein and Alex Padilla, and both New Mexico Senators Ben Ray Lujan and Martin Heinrich.

It can be easily argued that the reason so many are attempting to come into the United States now is because Joe Biden invited them to do so, beginning as a presidential candidate. He broadcast his intentions to freeze deportations, cut funding of Border Patrol, end the Remain in Mexico agreement put together by the Trump administration and Mexican leadership, and end the detention of illegal migrants on the southern border. From his first day in office, Biden has been busy reversing successful border security policies and agreements put in place by the previous administration. The word got out a long time ago and we all know the result – the Biden border crisis is alive and growing while the administration continues to turn a blind eye and gaslight about what great progress they are making on dealing with a crisis they created.

Border governors are on their own, essentially, when it comes to border security. Governor Abbott faces the most challenges because Texas has the longest border with Mexico and includes some difficult terrain to maneuver. Governor Ducey has been a strong partner with Abbott as Arizona also faces problems with border security. Ducey, during his State of the State address Monday, announced the creation of a multi-state border force to address the flood of illegal migrants at the southern border. Ducey described the agreement as “a commitment between states to do what the Biden administration is unwilling to do: PATROL and SECURE our border.”

Arizona Gov. @dougducey: “Texas Gov. @GregAbbott_TX and I are teaming up to form the American governors Border Strike Force — a commitment between states to do what the Biden administration is unwilling to do: PATROL and SECURE our border.” pic.twitter.com/2zDP3IyKA9

Arizona’s border towns are facing the same stresses that Texas border communities do – overwhelmed law enforcement personnel and not enough resources to handle the increase of illegal migration. It has fallen on the states to come up with their own solutions. In Texas, Governor Abbott developed Operation Lone Star. Its mission is to stop the flood of illegal migration, human trafficking, and drug trafficking. Drug cartels and human traffickers (coyotes) have taken up the vacuum in spots along the border without sufficient protection.

In his State of the State address, Ducey explained that the multi-state border force would be “a partnership between states to secure the southern border by sharing intelligence, strengthening cybersecurity efforts and improving efforts to protect children and families.” I’ll be curious to see if New Mexico’s governor, a Democrat, will join in on the joint effort. Will Governor Michelle Lujan Grisham, once on the shortlist of potential vice-presidential candidates for Biden, do what is best for her state or simply avoid any conflict with the Biden administration by not joining in? The Temporary Protected Status sought by the Senate Democrats will only serve as a continued incentive for more migrants to try to cross the border.