Home Politics Democrats to nuke the filibuster to raise the debt Ceiling, Manchin and... 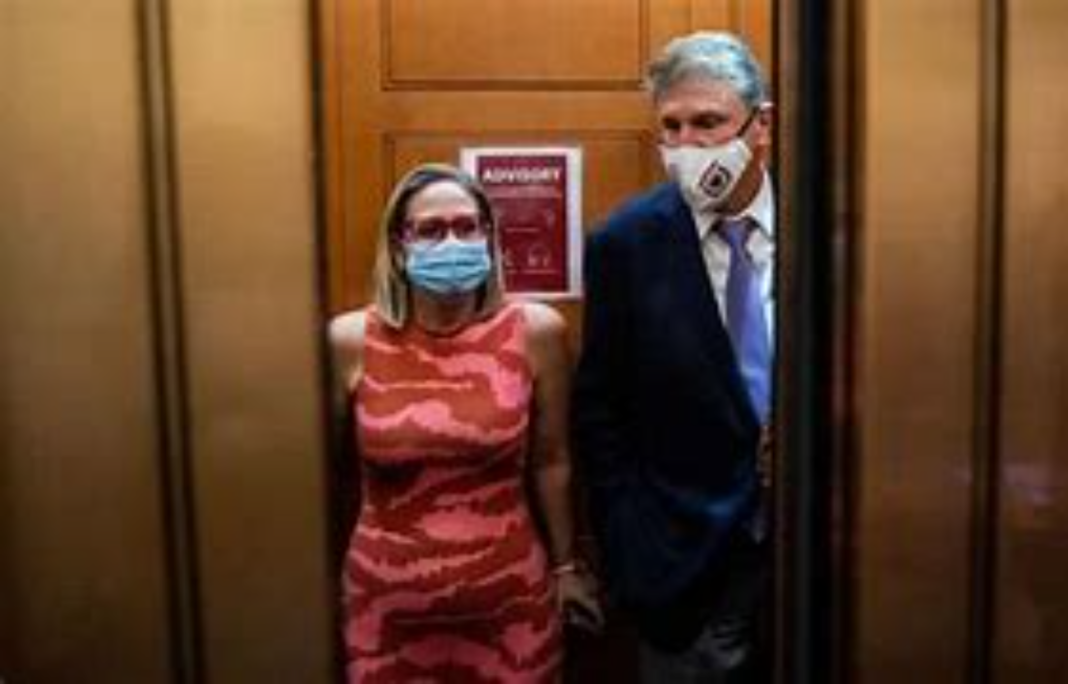 If so, it would be a tactical nuclear strike. They won’t convince Joe Manchin and Kyrsten Sinema to end the filibuster entirely, but if the only way to avert a global economic collapse is to create a new exception to the filibuster for bills to raise the debt ceiling, Manchin and Sinema will have no choice.

In fact, I wonder if that’s been Chuck Schumer’s game all along in refusing to raise the debt ceiling via reconciliation. Maybe he wants to prove to Manchin and Sinema that their Republican friends will refuse to compromise in certain cases even when that refusal would risk utter catastrophe. If he can get the two moderates to make an exception to the filibuster for the debt ceiling on grounds that the GOP is implacable and unreasonable, conceivably it could soften them up to make another exception later for, say, voting rights.

If that’s not Schumer’s game in resisting the use of reconciliation to raise the ceiling then I don’t know what his game is. He’s going to hold a vote tomorrow on a standalone bill to raise it, knowing that Republicans will filibuster that bill. Dems will get a day of “Republicans are trying to destroy the country” soundbites out of that. What happens after that is unclear. Do they try to do it via reconciliation? Or does Schumer continue to hold out, leaving amending the filibuster as the party’s only option?

Manchin is promising that the debt ceiling will be raised on time and isn’t ruling out reconciliation as the means to do it:

“We just can’t let the debt ceiling lapse. We just can’t,” Manchin said, adding that Democrats should not be concerned about politically sensitive votes.

Asked if leadership should use the reconciliation process, Manchin said, “We’ll do what we have to do, absolutely.”

His problem is that Schumer is driving the car, not him. And because the reconciliation process is time-consuming, at a certain point — soon — it’ll be impossible to get it done in time to avert a default on October 18, when Janet Yellen estimates the U.S. will hit the ceiling. Think of it as speeding towards a cliff; eventually there comes a moment when, even if you hit the brakes as hard as you can, you won’t come to a full stop before tumbling over.

The only way to avoid going over the cliff is to have someone jerk the wheel and steer away from it. Mitch McConnell could do that by agreeing to provide 10 Republican votes for cloture so that Democrats can raise the ceiling themselves, but McConnell has sworn up and down that he won’t do that. If he’s true to his word then Manchin and Sinema could jerk the wheel by agreeing to change the Senate rules so that votes on the debt ceiling are no longer subject to a filibuster.

How does that cliffhanger end?

The problem is time. First the Senate Budget Committee would try to pass a resolution with instructions for raising the ceiling, but the committee vote would likely deadlock. Then Senate Dems would pass it in a full floor vote followed by a lengthy “vote-a-rama” in which senators would offer amendments for hours. Then the Senate would pass the resolution and send it to the House. The House would then pass a bill raising the ceiling and send it to the Senate, which would undertake a second vote-a-rama. If any amendments ended up passing, the amended bill would then need to go back to the House again.

Due to congressional rules, some of these procedures could take days. Per the Times, even if McConnell tried to speed up the process by minimizing GOP procedural obstruction, ambitious individual senators like Ted Cruz or Josh Hawley could try to slow it down to impress the populist base. McConnell is sanguine in his belief that there’s still plenty of time to get it done…

I just caught up with @LeaderMcConnell on his way into his office.

He said “of course” senate democrats still have time to do reconciliation — Dems say they don’t. “They could’ve started weeks ago.”

“All we’re doing on the floor is nominations,” he said.

…but Yellen’s deadline of October 18 is only an estimate. The actual day on which we’ll hit the ceiling depends on several variables, which means that an accidental default is possible if Congress waits until the last minute to do this.

Schumer should obviously begin the reconciliation process immediately in the hope that he can complete it before October 18. But if it’s dragging on too long and Yellen suddenly announces that the debt ceiling will be reached sooner than we think, Dems will need a “break glass in case of emergency” option. That’s either Republicans relenting and agreeing not to filibuster a regular bill to raise the ceiling or Manchin and Sinema agreeing to change the filibuster rules to let Democrats do it themselves via 50 votes plus Kamala Harris.

Democratic independent Angus King has opposed tweaking the filibuster during his time in the Senate but he told reporters that he’ll do it if raising the debt ceiling requires it:

“There’s no bargaining,” said Senator Angus King of Maine, a moderate independent. “They’re just stamping their feet and saying no.”

He added, “It’s a qualitatively new level of irresponsibility.”…

“I have been very reluctant for nine years about modifying the filibuster rule, especially when it comes to policy, but this has nothing to do with policy,” he said. “This is about keeping the United States and world out of what could be a severe recession.”

If there’s any bill that a simple Senate majority should always have it within its power to pass, it’s a bill to raise the ceiling. Some would say that it’s foolish to deprive the minority of its power to hold out and try to extract concessions in return for helping to raise it but (a) McConnell’s been clear that there’s no Republican list of demands in this case and (b) for hostage-taking to be effective, you have to be prepared to shoot the hostage if your bluff is called. And this particular hostage, a default by the United States government, can never be shot. The consequences would be so severe that it would amount to a suicide bombing more than a hostage execution. The ceiling has to be raised, so we might as well make it as easy as possible to raise it.