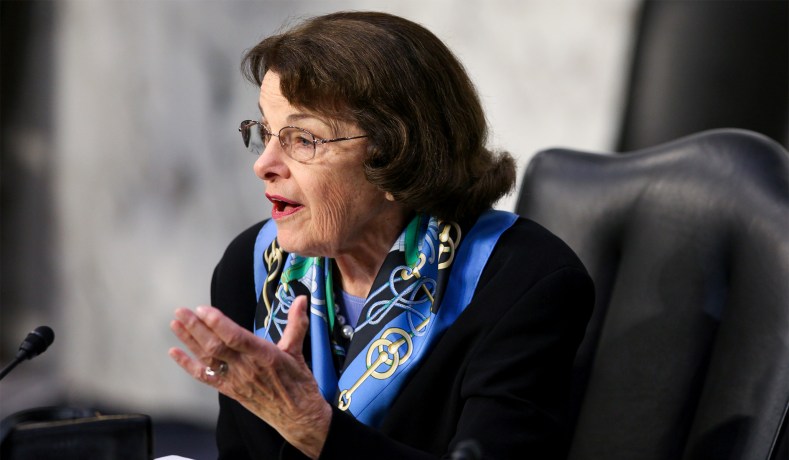 On Thursday, as reported by John McCormack, California Senator Dianne Feinstein was holding firm in her support for the filibuster:

Despite being under constant pressure from the left, Feinstein has not yet changed her mind. Asked Thursday if she supports the Senate’s 60-vote threshold, Feinstein told National Review: “I do right now, yes.”

Feinstein added that she’s “looking at” her Democratic colleagues’ proposals to change the filibuster and thinks the Democratic caucus’s “discussion is good. I think we’re all listening to one another.”

“The Senate is an institution, and this is part of that institution,” Feinstein said of the filibuster. “It’s there and you deal with it, and you find you can deal with it. So, changing it, you have to think: What are the ramifications for the institution?”

Is there anything Senate Republicans could do to get Feinstein to change the rule to 51 votes? “I haven’t gone that far in my thinking, because I just know that votes aren’t there to do it,” she replied.

Yet it appears that the pressure from the Left that John alluded to may finally be hitting pay dirt.

On Friday, just a day after her remarks to National Review, Feinstein released a statement saying she was open to changing the filibuster:

I have tried for years to pass legislation in these areas. This month the House passed bills to improve background checks for gun purchases and reauthorize the Violence Against Women Act, among other key legislation. Ideally the Senate can reach bipartisan agreement on those issues, as well as on a voting rights bill. But if that proves impossible and Republicans continue to abuse the filibuster by requiring cloture votes, I’m open to changing the way the Senate filibuster rules are used.

President Biden this week suggested returning to a talking filibuster so opponents of a bill must speak on the Senate floor and explain their opposition. That is an idea worth discussing. I don’t want to turn away from Senate traditions, but I also don’t believe one party should be able to prevent votes on important bills by abusing the filibuster.

It’s worth noting the broader context that Feinstein has been under fire from progressives for years as her party and home state have moved even further to the left. Just recently, she was forced to give up her post as the top Democrat on the Judiciary Committee for the crime of being too nice to Amy Coney Barrett during last year’s confirmation hearing. Activists are itching for the 87-year-old senator to retire so they can replace her with somebody further to the Left who more closely reflects where California is at.

The Mask mandates are utterly useless