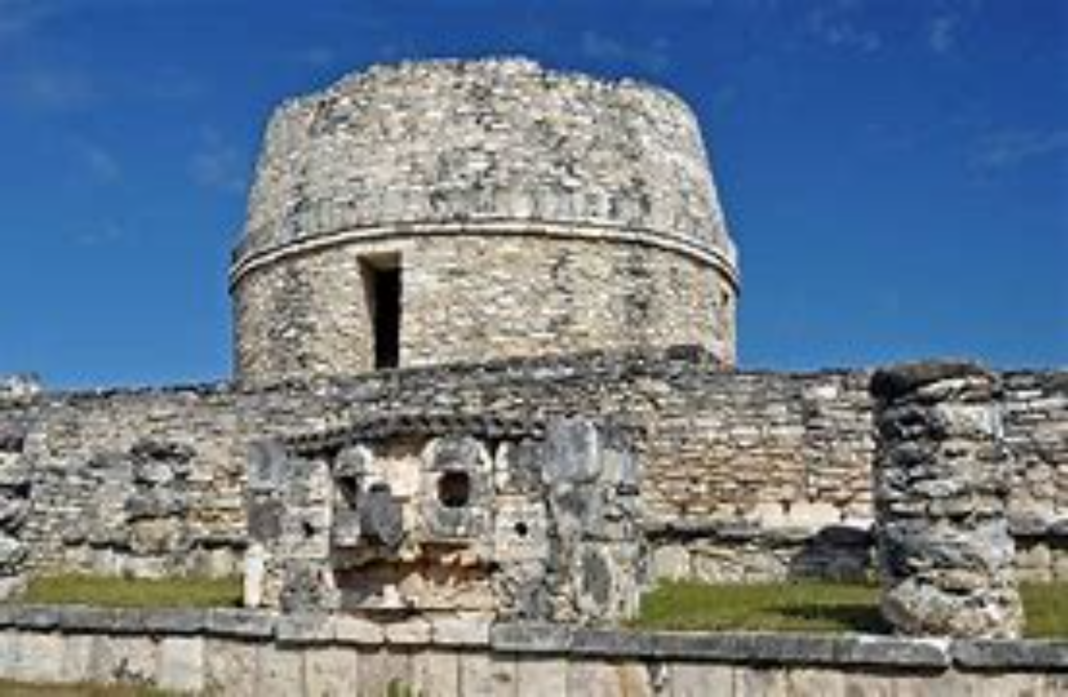 Controversy has raged for decades in academia as to whether the Maya of ancient Mesoamerica independently invented writing and a sophisticated number system, with many arguing that European influence must have been involved. The recent discovery of carvings, such as the one above, in the hitherto unexplored recesses of the Chac Mool Cenote (a water-filled cave) in Tulum, Mexico, seems to establish European genetic influence.

The facial features clearly are not Mesoamerican. According to Dr. Alejandro Puracaca of the Universidad de San Juan Cosala, of Jalisco, Mexico and his colleague Raquitica Ramanujan of Oxford, writing in the Journal of Anthropological Propriety.

According to Dr. Puracaca, “The lack of the epicanthic fold in the carving establishes beyond doubt that the male depicted was not Mesoamerican, since the Amerinds lacked the fold as well, but of Nordic origin, consistent with Viking admixture. The interbreeding with a Nordic genome explains the development of a vigesimal exponential number system by the aborigines, although Europe never succeeded in this. This is a classic example of retrogeny or inverse causality, in which a technology springs in a primitive group from a more advanced people who never invented it.”

This further carving, also found 300 meters back in Chac Mool, is thought to be Tloxyproctyl, the Aztec god of horror and feathers, ultimately derived from Late Drosophiletic mythology, who, like the Greek Medusa, could reduce mortals to a sort of coma or deep sleep just by looking at them. This power is shared by many politicians of clear Eurowhite ancestry, suggesting genomic interlinkage. Cf. Medusa in Greek mythology.

However, there is some dispute regarding this in academic circles. Dr. Lupita Perez de los Calamares Fritas, of the Universidad de Guacala Norteña, argues that the figurine represents proto-Bacchus as the expression arguably represents a hangover afflicting the wine god following a bacchanal. Perhaps the most fascinating in terms of evolutionary provenance is the above is presumed—though this is disputed—to be Carcajada, the goddess of fertility. According to N. J. Balacera, writing in H eterophletic Mutability Review, this is plausible since the statuette suggests interbreeding between the Maya and fish. This would explain large-scale construction by the Maya. In terms of Mesoamerican genomics, most interesting is this ceramic mask, found in 1953 in Betabel, Yucatan, by the team of Dr. Gustavo Krankenhaus of Stanford. The provenance is clearly African though this has been denied by White Nationalist pseudoscientists. The towel is placed to conceal damage. There has been some Photoshopping to minimize cracks and other minor damage so as to show how it must have appeared during the Late Paleoprocrustean Period when it was thought to be made. Just as recent research has shown that the ancient Greeks were actually African, it now seems that the Maya also sprang at least in part from Africa, most likely from the Wunxputl Xonti tribes of modern Tanzania. This is shown conclusively by evolutionary homology, such as that both Xonti and Maya had two arms and legs. (photo courtesy Annals of the Society for Evolutionary Piety, Vol. 13, pp. xxiii) Of course another explanation or these relics is that someone left a quantity of plastalina, sort of plastic modeling clay, on our kitchen counter and Violeta started doodling with it while waiting for something to cook. I find this account inherently uninteresting and so will stick with geogenetics. That she can do these things with no training illustrates my genius for marrying women smarter that I am. (Readers will cackle that many small mammals and some plants meet this standard. Pfah. What do they know?)

Next: I have received hundreds of letters asking what happens in the Reed-Gonzalez household on an average day (or would have received them if I had, which is close enough in today’s journalism). Anyway, bats and hummingbirds. Our house is the Mexican kind, with the yard in the middle of the house instead of the house in the middle of the yard. Violeta likes hummingbirds, as do I since they are delightful creatures that never talk about inclusion. She hung a sugar-water dangle-thing for them, and they came to eat. They proceeded to flash and gleam in implausible colors, as is fit for them, and we watched, and they ate, and all was well until one flew into the domed skylight in a bathroom and kept flying desperately trying to go through the glass until it dropped to the floor, half dead with exhaustion.

Finding it, Violeta took the beastling, barely palpitating, and put it next to a plate of sugar water. It seemed dazed and resigned to ending its earthly sojourn, but then Sensed Something. Could it be? Yes, it was. It stuck out its proboscis, or beak, or straw, or whatever it is that hummingbirds have. Sccccchhhhlurrrrps. I have seen bilge pumps with less capacity and enthusiasm. It more or less sat up, looked around, considered and then—flit—hummed aloft in good repair. Mission accomplished.

OK, bats. You may wonder how we came to bats, or why you need to know about them. Well, you just do. Not everything in this world is explicable.

When you live in a house with the yard in the middle, your inner bedroom wall, and for that matter of the living room, can consist of sliding glass doors. If you want privacy against people who aren’t there anyway, you pull the curtains. So it was after dark and Vi was looking out through the wall and thought she saw things flittering around the hummingbird dangle-thing. Intrigued, she watched more closely. Bats, six or eight of them, dancing in air and generally showing off. Night by night the throng grew, until she swears there must be thirty or forty. (Until you have tried to count flying bats, you have little idea of what “difficult” means.) They were also eating the sugar water from the dangle-thing since in the morning it was as dry as an English wit.

This may not strike you as crucial to, say, the international financial system, or NATO, or some other depressing thing. Yet it was the first time in what has somehow gotten to be a long life that I had ever had bats. Dark, small, agile shadows against the sky. I saw no reason to be unpleasantly judgemental about them. They weren’t Nazgul or anything, probably anyway and, since they liked sugar, they couldn’t be vampires unless they preyed on diabetics. They flew high enough that our two felines, Cat and Other Cat, posed no danger.

There you have it in one short column, an explanation of human evolution and of Fred’s bats, a marvel of compaction.

Quick ‘nuther topic: Because I sometimes write about technology in China, about which I know a reasonable amount, readers sometimes think I am an authority on Chinese society, which I assuredly am not. A common question involves repression in Xian Jiang and China in general. I have exactly zero personal experience of such repression, but others know more. For example:

The Perfect Police State, by Geoffrey Cain. Repression by technology in Xin Jiang. Horrifying, good picture of what repressive technology can do. Well worth reading.

You Will Be Assimilated, by David P. Goldman. Same topic, more on the technology, less on Xin Jiang, same tech, less brutality in the rest of China.

The People’s Republic of Amnesia, by Louisa Lim. What actually happened on June 4, 1989 in Tiananmen Square and Chengdu by an excellent Chinese author.

Airlines to risk failure if they do not cut carbon emissions...