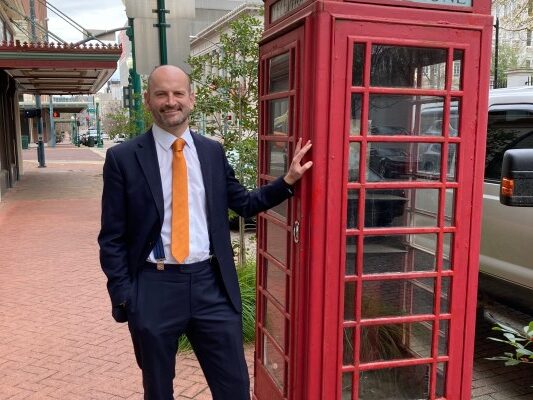 I have done a podcast with Douglas Carswell, here. He is best known, certainly in America, as a Brexiteer. From 2005 to 2017, he was a member of the British House of Commons. For most of those years, he was a Conservative; then he joined UKIP; shortly after, he became an independent.

Now, believe it or not, he is in Mississippi. He is president of the Mississippi Center for Public Policy.

As he tells us in this podcast, Carswell grew up in Uganda. Idi Amin came to power the same year Carswell was born: 1971. Possibly Carswell’s first memory is July 4, 1976. That was the day we Americans celebrated our Bicentennial. Uganda saw the Raid on Entebbe.

Living in Uganda, says Carswell, he had a crash course in economics before he knew what the word “economics” was. The government decreed the price of things; therefore the country ran out of things. Young Carswell endorsed Milton Friedman before he read him.

Carswell is a classical liberal, he says. “The free market is the most perfect system we have, and liberty is the way to ensure that you get human progress.” Liberty, he says, is “the engine of human progress.”

In our podcast, we discuss a parliamentary system — his — and a presidential system — ours. Theirs has always seemed strange to me (though I admire Britain immensely). Does ours seem strange to him?

Yes, but “rather wonderful,” too. “Here in Mississippi,” says Carswell, “I was stunned to discover that a senator or a representative in the state capitol has more power than a member of the British House of Commons.” The state senator or rep can initiate legislation, etc.

Also, Carswell likes the idea of a written constitution, as ours is.

In the course of our conversation, I ask him to discuss a number of British figures – Conservative prime ministers, as it happens: Thatcher, Cameron, May, and Boris (no last name necessary). He is highly interesting on all of them.

Coming to America, he took a job in — may we be frank? — a very poor state. How do you persuade Mississippians — ordinary, everyday Mississippians, not think-tank aficionados — of Reagan-Thatcher politics? Carswell has much to say on the subject. Forty years ago, the Friedmans’ Free to Choose series “informed tens of millions of Americans about the miracle of the free market.” Think tanks today should engage directly with the hearts and minds of ordinary people, says Carswell. This is what the Brexit campaigners did. We have the digital means, in abundance.

I like to ask foreigners in America what they think of our country, good and bad. Carswell tells me no bad. He notes two things, on the plus side.

There is a dizzying array of choice! You don’t order a coffee. There are a hundred decisions to make, within that decision.

Also — hang on to your socks — Carswell credits Americans with having good manners. But wait a minute: Isn’t Britain the home of good manners? That may be a myth, says Carswell. “People have been watching too much Downton Abbey.”

Many of us have been wondering about the word “conservative,” which means different things in different places (same with “liberal”). The word “conservative” has undergone serious changes here in America of late. I, for one, have written about this several times, including in an essay titled “‘Conservative’: A Term Up for Grabs.”

For decades, says Douglas Carswell in our podcast, conservatism in America was a mixture of “traditional conservative values” and free-market economics. (This mixture is known, by some, as “fusionism.”) The trads and the free-marketeers were allied. Now that alliance has been badly frayed.

The “Friedmanite tendency,” says Carswell, has been “put under siege” by people who wear their concept of patriotism on a hat and who “perhaps don’t quite understand that the United States benefits from imports and that free trade is good for the United States.”

What Carswell would like “conservative” to mean, in America, is this: “someone who wants to conserve the idea of American exceptionalism and of Western cultural norms.” He continues, “There’s this unrelenting attack from the radical Left to denigrate America, to rewrite the American story as being something to be ashamed of,” etc.

Douglas Carswell and Daniel Hannan are close friends and comrades-in-arms. As I have mentioned, the latter has just entered the House of Lords. I ask Carswell whether he can still call his friend “Dan.” Or must it be “Baron Hannan of Kingsclere”?

As we talk about this, Carswell says, “Maybe it’s a sign of middle age when people you know start to become peers of the realm.” He adds, “People in England used to say you’re getting old when you say that policemen look young.”

Some years ago, a friend of mine was elected to the Senate. I said to David Pryce-Jones, “Did there come a time when your friends and classmates started being elected to Parliament and serving in the cabinet?” Yes, he said. “Was it strange?” I asked. Yes, he said.

That is so true. There are always baby-faced policemen — maybe 20 years old — to go with the vets.

Again, my podcast with Douglas Carswell — the Brit in Mississippi — is here.