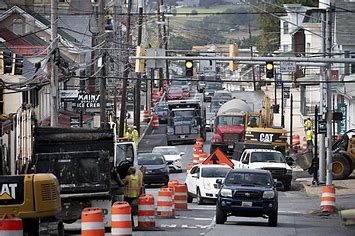 Texas, Arizona Have Recovered All the Jobs Lost When Covid-19 Hit

Texas and Arizona have joined two other states in recovering all the jobs they lost at the start of the Covid-19 pandemic, leading a trend that is expected to include another dozen states by the middle of this year.

The states, which also include Utah and Idaho, have benefited from demographic shifts before and during the pandemic—experiencing outsize payroll growth in retail, warehousing, technology and transportation industries. Companies have moved operations to the states, and workers have moved in as well, sometimes leaving more crowded and expensive urban areas.

Gee, I wonder what these states have in common? The WSJ has figured it out:

The states—all Republican controlled—also have had relatively relaxed Covid-19 restrictions during the pandemic, which economists say softened the blow on their economies.

• China has just reported the best economic growth numbers in a decade, saying their economy grew by 8.1% last year. Anyone believe this? Barron’s reports:

“I’ve been trying to ferret through China’s data to see why the quarterly change in GDP was revised up significantly in the third quarter and estimated at an extraordinary 1.6%—nearly 6.5% annualized—in the final quarter,” said George Magnus, an associate at the University of Oxford China Centre.

“It beggars belief that this reflects an economy in which the property sector elephant started to contract, consumption weakened, and Covid-related shutdowns began” at the end of the year, he told Barron’s Tuesday.

Indeed, contraction in China’s real estate sector shrank nearly twice as fast in the fourth quarter than it did in the previous quarter, contracting 2.9% after a 1.6% fall in the third quarter. That was also the first consecutive quarterly fall in 13 years, according to official data. That hits a country like China especially hard, where the property sector is estimated to account for a whopping 30% of overall GDP.

If China’s economy is so swell, why did they announce yesterday that they are cutting interest rates?

The country’s central bank on Monday cut two key interest rates that could pave the way for further cuts to the benchmark lending rate.

Maybe China is lying to us. Who would expect that? And I guess there is no inflation in China.

• Larry Fink, the president of investment behemoth BlackRock, is the prince of woke capitalism, pressuring the world of finance to disinvest in fossil fuels. Sayeth Fink:

“Stakeholder capitalism is all about delivering long-term, durable returns for shareholders. And transparency around your company’s planning for a net zero world is an important element of that.”

Well he can shove it. And good to see the state of West Virginia doing exactly that:

CHARLESTON, W.Va. – State Treasurer Riley Moore today announced the Board of Treasury Investments, which manages the state’s roughly $8 billion operating funds, will no longer use a BlackRock Inc. investment fund as part of its banking transactions.

The decision was based on recent reports that BlackRock has urged companies to embrace “net zero” investment strategies that would harm the coal, oil and natural gas industries, while increasing investments in Chinese companies that subvert national interests and damage West Virginia’s manufacturing base and job market.

“As the state’s chief financial officer and chairman of the Board of Treasury Investments, I have a duty to ensure that taxpayer dollars are managed in a responsible, financially sound fashion which reflects the best interests of our state and country, and I believe doing business with BlackRock runs contrary to that duty,” Treasurer Moore said.

Treasurer Moore said this action is consistent with his belief that the state should not do business with firms whose corporate policies directly threaten West Virginians’ interests and livelihoods.

More of this please.

US ask for permission from the Taliban terrorist to evacuate Embassy...

Taiwan should Learn from Afghanistan, Biden will never defend allies