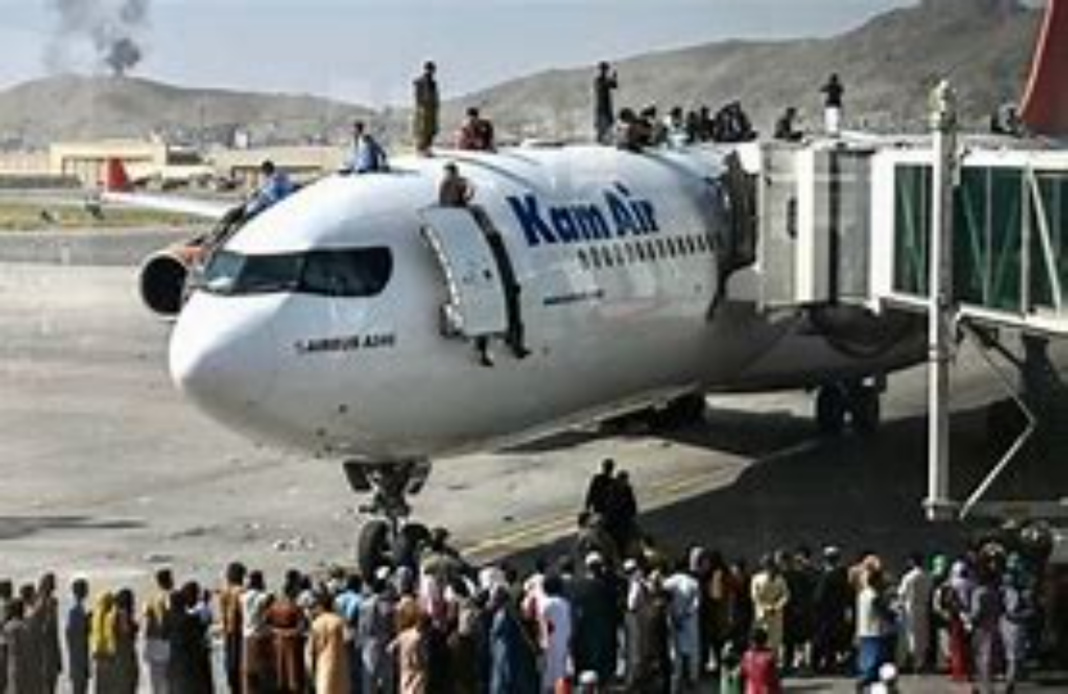 I can’t believe I’m reading this. At this point, the only excuse for mass resignations is that things are so chaotic on the ground that it’s best to continue with the people in place who are up to speed and then ask for resignations once the crisis is over.

The United States government should never be in the position of saying it can’t guarantee safe passage in a country where thousands of Americans live. Especially when the government is responsible for them living there.

U.S. government-provided flights are departing. U.S. citizens, LPRs, and their spouses and unmarried children (under age 21) should consider travelling to Hamid Karzai International Airport.   You should plan to enter the airport at Camp Sullivan. From the HKIA Airport South Traffic Circle, head east for 1km and turn right on to Camp Sullivan.   Please note that gates may change frequently and that we will provide updates as necessary.

Please be advised that a significant number of individuals have registered and space on these flights is available on a first come, first serve basis. You may be required to wait at the airport for a significant amount of time until space is available…

Do not call the U.S. Embassy in Kabul for details or updates about the flight. Do not travel to the airport until you have been informed by email that departure options exist. We will continue to provide periodic updates to this message.

So, if I have this right, people should stay put until they get an email about flight options. But they should also “consider” leaving now. But if they do leave, they should bear in mind that there’s nothing Uncle Sam can do to protect them. But if they don’t leave they might never get out since flights are first come, first served.

We’re about a day away from the State Department telling Americans trapped in Afghanistan to grab any weapon they can find and try to fight their way to the border.

At least things are happening in an orderly way at the airport. Right?

“They’re beating people in the crowds…This is the exact chaotic evacuation and exit the Biden administration was warned about” pic.twitter.com/NjMWL69UtK

Lloyd Austin said this afternoon that there have been “no hostile interactions” so far between the Taliban and American soldiers at the airport but of course that can change at a moment’s notice depending upon when the country’s new rulers tire of the evacuation process. And the State Department admitted to reporters that they’ve seen “reports” of jihadis blocking people from reaching the airport:

.@DeputySecState Wendy Sherman: “We have seen reports that the Taliban, contrary to their public statements and their commitments to our government, are blocking Afghans who wish to leave the country from reaching the airport.”

Seriously, how close are we to a major troop surge into Kabul?

If Biden’s worried that Americans wouldn’t support that so soon after he made the case at length for withdrawal, I have exciting news for him:

Mark Milley also faced reporters this afternoon and admitted in so many words that the Pentagon has no idea what it’s doing:

Gen. Mark Milley on Afghanistan: “There was nothing that I or anyone else saw that indicated a collapse of this army or this government in 11 days.” pic.twitter.com/o1PpeglvFn

Right, rapid collapse was one scenario of several — but it was the most dire, the one that a competent administration would have planned for in order to avoid the foreseeable clusterf**k in which we now find ourselves. But lay that aside.

Why didn’t the military see it as the most likely scenario? How did we not anticipate the immediate implosion of the country we occupied for 20 years based on the knowledge we acquired there?

And if Milley couldn’t foresee that, could he at least have foreseen that we might need Bagram for a few more weeks for evacuations?

The latest word on how we’re going to get stranded Americans to the airport, by the way, is “air bridges”:

Senate aide tells me that at a briefing for Senate aides this afternoon, the administration said that they are currently “thinking about and discussing air bridges” (presumably helicopters) to get to Americans who are outside of Kabul to the airport. https://t.co/x2XPkjrvwR

Is the Taliban going to be okay with American air assets zipping over them in the skies above Kabul? It’s their country now. I assume we’ll need their permission. And even if they grant it, there’s no guarantee that we’ll get to everyone, it seems:

Q: Do you have the capability to go out and collect American citizens?

SecDef Austin: “We don’t have the capability to go out and collect large numbers of people.”

This is the same Pentagon that’s spent the past few days telling us they planned for every contingency. Now they’re reduced to having the State Department send emails to stranded Americans telling them to make a run for the airport if they think they have a shot of getting there. This is Dunkirk if the British army had been ordered to try to swim across the channel instead. If you’re the praying type, pray for everyone who’s trapped and desperate right now. Hope “the clock” doesn’t run out on them.