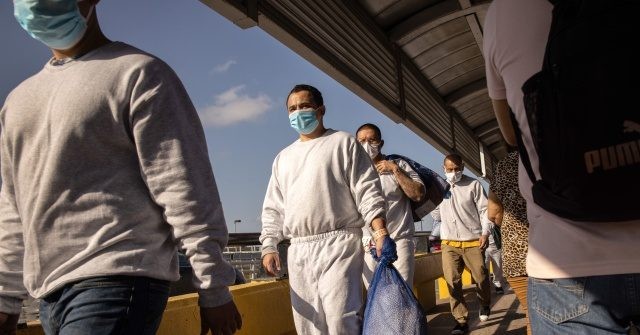 Former United States Ambassador to Mexico Christopher Landau writes that the current surge of illegal immigration at the southern border can be stemmed through a federal government response effort that punishes employers for hiring illegal aliens.

In an op-ed in the New York Times this week, Landau blasts the Biden administration for gutting interior immigration enforcement through “sanctuary country” orders, halting the construction of the U.S.-Mexico border wall, dropping removals of Unaccompanied Alien Children (UAC) through the Title 42 authority, and ending the Remain in Mexico program that cut asylum fraud.

Landau writes that he is “not at all surprised” by the current surge of illegal immigration and argues the only way to end the crisis is through mandatory E-Verify, a program that requires employers to hire Americans and legal immigrants over illegal aliens.

“No one is holding American employers to account for their willingness to hire millions of unauthorized immigrants,” Landau writes:

The new administration has certainly given [migrants] — and the human smugglers who profit from their journeys — a basis for such hope: The administration declared that it would stop most deportations (a decision since blocked by a Federal District Court), halted construction of the border wall, announced new “priorities” that sharply limit immigration enforcement, stopped expelling unaccompanied minors under health-related authority invoked during the pandemic and began to phase out the Migrant Protection Protocols that helped prevent abuse of our asylum system and end the last surge of family units across the border. [Emphasis added]

But the biggest factor driving such flows has gone largely unaddressed: the willingness and ability of American employers to hire untold millions of unauthorized immigrants. The vast majority of the people are coming here for the same reason people have always come here: to work (or to join their families who are here to work). [Emphasis added]

Unless there is a serious effort, through mandatory E-Verify and other relatively simple means, to ensure that persons hired to work in the United States are eligible to do so, our country will continue to entice unauthorized immigrants and reward unauthorized immigration. [Emphasis added]

This week, Rep. Mo Brooks (R-AL) is leading legislation that would mandate E-Verify nationwide to protect the labor market from illegal hiring by businesses.

“The prospect of a job entices illegal aliens to break into America,” Brooks said:

Making E-Verify mandatory for all companies coupled with harsh penalties for violations cuts off illegal aliens from American jobs. The result? Fewer illegal aliens to take jobs from and suppress the wages of American workers. Which equates to higher pay and more jobs for Americans. [Emphasis added]

An added bonus is that illegal aliens who can’t get jobs will self-deport at no cost to taxpayers. That is a great deal for all Americans. This bill is a no-brainer. [Emphasis added]

Sen. Tom Cotton (R-AR), who is sponsoring a mandatory E-Verify bill that gradually increases the minimum wage with Sen. Mitt Romney (R-UT), has introduced a plan that would require migrants seeking asylum to apply for protections in their native country rather than applying by showing up at the U.S.-Mexico border.

Cotton’s legislation would also require that migrants traveling through safe third countries, like Mexico, which has a robust asylum process, first apply for asylum in those countries before applying in the U.S.

Today, there are at least eight million illegal aliens holding U.S. jobs. The mass employment of illegal aliens by hundreds of businesses, though, continues to go largely ignored by the law, as only 11 employers and no businesses were federally prosecuted for hiring illegal aliens from 2018 to 2019.

The number of federal prosecutions of employers who knowingly hire illegal aliens rarely exceeds 15 per year. Only during brief periods — from 2004 to 2006 and from 2008 to 2010 — did 15 or more employers each year face prosecution for hiring illegal aliens.

John Binder is a reporter for Breitbart News. Email him at jbinder@breitbart.com. Follow him on Twitter here.

U.S. Census: A Closer Look at the Fastest Growing Minority Group in the United States