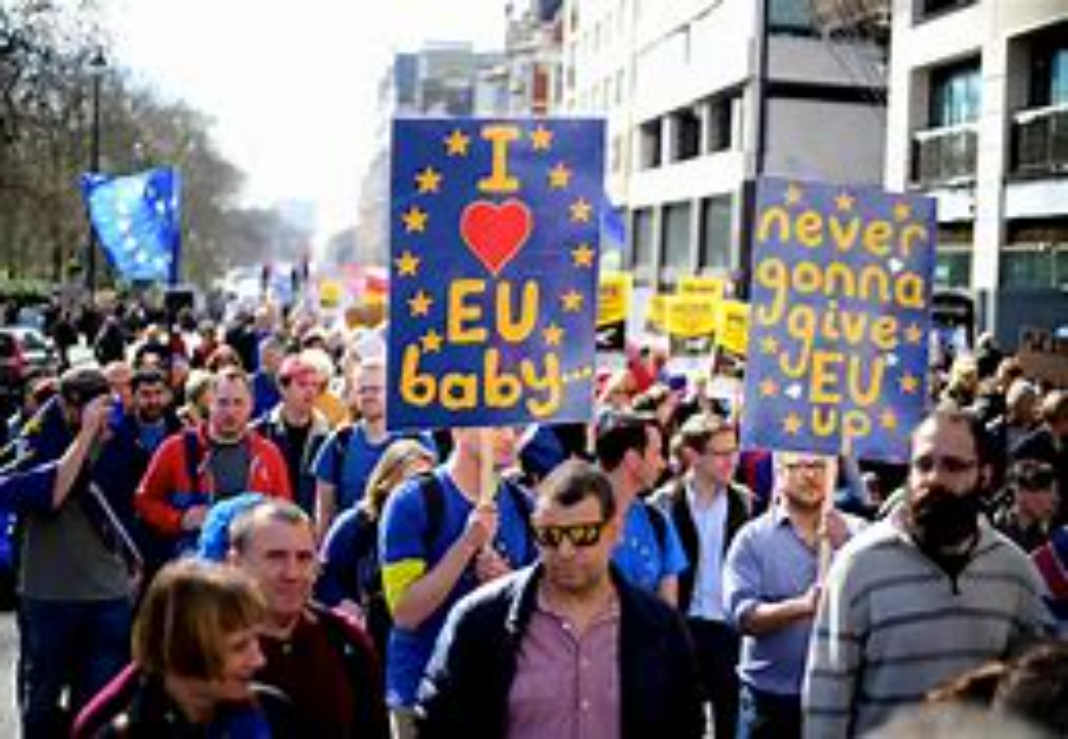 Britain demanded on Wednesday that the European Union agree to rewrite a deal overseeing problematic post-Brexit trade involving Northern Ireland just a year after it was agreed with the bloc, a call immediately rejected by Brussels.

The Northern Ireland protocol was part of the Brexit settlement, backed by Prime Minister Boris Johnson, that finally sealed Britain’s divorce from the EU four years after voters backed leaving in a referendum.

Businesses in Northern Ireland say it is damaging trade, and some pro-British groups have protested at what they say is a weakening of ties with Britain, raising concerns about a return to the violence which plagued the province for three decades.

“We cannot go on as we are,” Brexit minister David Frost told parliament on Wednesday.

He said London wanted a new “balance” to eliminate EU oversight of the accord, and that Britain already had the right to unilaterally deviate from parts of it.

European Commission Vice President Maros Sefcovic was clear that the protocol could not be redrawn, saying Johnson and Frost had negotiated it.

“We will not agree to a renegotiation of the protocol,” he said. “Respecting international legal obligations is of paramount importance.”

The protocol addresses the biggest conundrum of the divorce: how to ensure the delicate peace brought to the province by a U.S.-brokered 1998 peace accord – by maintaining an open border – without opening a back door through neighbouring Ireland to the EU’s single market of 450 million people.

It essentially requires checks on goods between the British mainland and Northern Ireland, which remains part of the EU customs area. These have proved burdensome to companies and an anathema to unionists, who are fiercely supportive of the province remaining part of the United Kingdom.

The Brexit deal was signed and approved by the British parliament in December 2020.

But Frost said the arrangement was not operating as Britain had expected and there was justification for invoking Article 16 of the protocol, which allows either side to dispense with its terms if they are proving unexpectedly harmful.

“Nevertheless…we have concluded that is not the right moment to do so,” he said. “We see an opportunity to proceed differently, to find a new path to seek to agree with the EU through negotiations, a new balance in our arrangements covering Northern Ireland, to the benefit of all.”

He said he hoped that the EU would study British proposals constructively to find a positive way forward.

Despite repeated British complaints, the EU has refused to amend the protocol, fearing that the hard-to-police frontier with EU member Ireland could allow goods to enter its single market without meeting its regulatory standards.

“We will continue to engage with the UK, also on the suggestions made today,” Sefcovic said in a statement. “We are ready to continue to seek creative solutions, within the framework of the protocol, in the interest of all communities in Northern Ireland.”

Reuters had reported on Monday that Johnson was threatening to take unilateral action.

‘Not unusual to renegotiate’

Much of what Britain has suggested as an alternative system was rejected by the EU during the four years of often tortuous talks. Irish Foreign Minister Simon Coveney said any solution must remain within the terms of the agreed protocol.

Frost said Britain wanted a “normal treaty framework” that was “more conducive to the sense of genuine and equitable partnership”, and would not be policed by EU institutions and the European Court of Justice.

“We don’t see what is wrong with that. Anyone would think that it was a highly unusual thing to renegotiate a treaty; of course it is not,” he told lawmakers.

His stance was hailed as a significant step forward by the Democratic Unionist Party, which shares power in the devolved Northern Irish government.

Even though checks on goods entering Northern Ireland from Britain have so far been relatively lenient, major retailers say they have struggled to cope and might need to shift supply chains from Britain to the EU.

Britain has already unilaterally extended a grace period reducing checks on shipments of chilled meat products, and the EU later agreed this could apply through September to end a dispute dubbed the “sausage war”.

Marks & Spencer, one of Britain’s biggest retailers, said extra paperwork had made it hard to get goods into Ireland and France since Britain formally left the EU’s single market on Jan. 1 – and that once full checks were introduced for Northern Ireland, it too should expect prices to rise and some items to be stopped.

The Northern Ireland Retail Consortium said a total breakdown in the protocol could result in tariffs.

“Any solution needs to be agreed with EU, as without this, there can be no stability,” its director Aodhán Connolly said.

This April saw some of the worst riots seen in the province since the 1998 accord in unionist communities sparked by anger at the protocol. Pro-British paramilitary groups also told Johnson in March that they were suspending support for the peace agreement due to concerns over the Brexit deal.