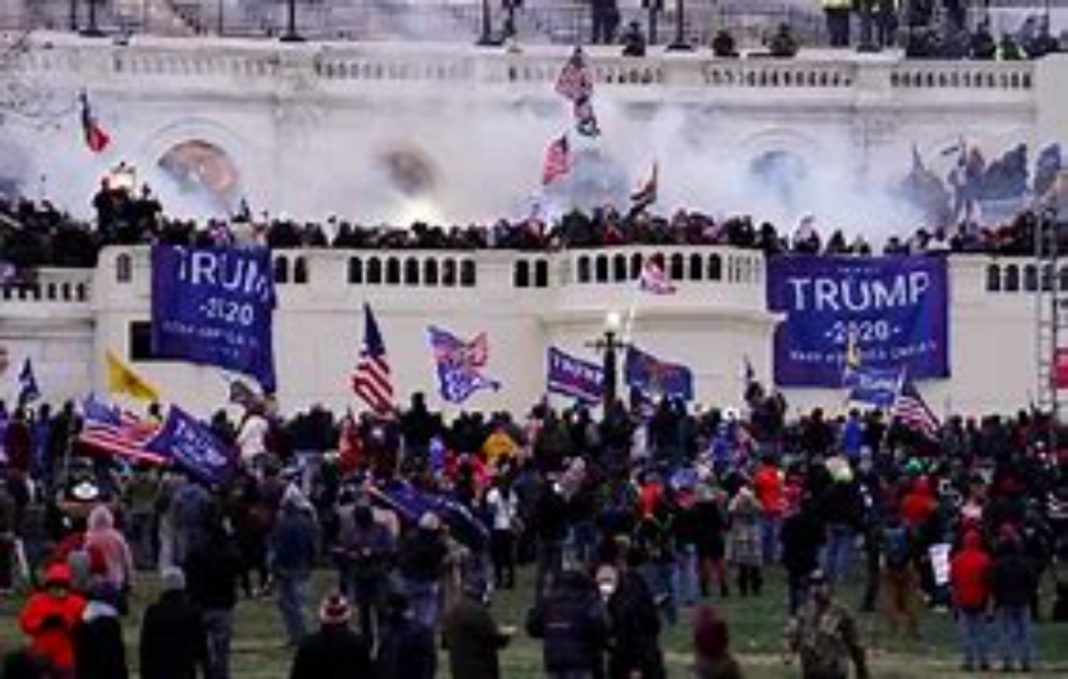 The galaxy of media outlets, fact-checkers, and “disinformation” NGOs are in five-alarm fire mode after Tucker Carlson broached the subject of infiltrators and provocateurs at the January 6 Capitol riot.

Before reviewing any of the existing details, we should note that no left-wing journalist would have the same reservations about raising this issue if the protest was left-wing, or if the alleged violent extremists were Muslims. Just last year the Intercept was extremely concerned about infiltration and escalation within left-wing groups by the FBI, but the idea that they might do the same to right-wingers is somehow beyond the pale.

Thus, the Revolver news article that kicked off last week’s interest in infiltrators begins with Senator Klobuchar’s absurd question to FBI Director Christopher Wray. She asks if he found himself wishing “if we could have infiltrated” some of the groups involved in Jan. 6.

Wray responds it’s a subject he’s “passionate” about. I’m sure he is.

Here’s the bottom line. You’re not crazy to want to know about the role of federal informants in Jan. 6, for three main reasons:

We’ll get to some of the more promising places to look, but first, let’s address some of Tucker and Revolver’s critics, nearly all of whom missed the point. It started with Twitter’s bizarre and widely-mocked fact-check:

The Washington Post and HuffPo focus on the problems with conflating unindicted co-conspirators and informants (HuffPo calls it a “wild, irresponsible jump”). It’s true that there are many reasons a person might not be indicted, an informant arrangement is only one, but the fact remains that we have every reason to expect these groups are highly infiltrated. Aaron Blake at the Washington Post misses the point even further, writing “Legal experts say the government literally cannot name an undercover agent as an unindicted co-conspirator,” which may be true, but they can certainly identify an informant as one.

After conceding that the fascist insurrectionists were right about Brian Sicknick, who was not killed by the mob, Jack Shafer at Politico writes that “we can never expect the current Congress to answer our questions definitively. That leaves it to the press to sort the Jan. 6 sense from the nonsense wherever and whenever it appears.” He’s too optimistic about the press, but it’s true that the only way to get to the bottom of infiltration of political groups by federal law enforcement is through Congress, as with the Church Committee and COINTELPRO.

The main case at issue is the prosecution of Thomas Caldwell, a former Naval reserve intelligence officer alleged to be an Oath Keepers leader. “The feds say he’s an extremist leader who directed rioters. He also had top-secret clearance and worked for the FBI, attorney says,” reads the headline about him in the Washington Post. One shouldn’t jump to conclusions, but does one really have to be a truther to wonder if there’s something off about this? Blake points out that one of the unindicted co-conspirators appears to be his wife, but it doesn’t necessarily follow that she isn’t an informant, given the feds’ use of Oath Keepers’ spouses for that purpose in the past. With a resume like Caldwell’s you have to wonder if he was an informant himself, and if the fact that he is being prosecuted would appear to close the case there, consider that in the Gretchen Whitmer kidnapping case in Michigan, the feds indicted an informant there too.

“For our purposes, here is the critical distinction between UCCs and CIs: By definition, a confidential informant cannot be a member of a conspiracy — whether indicted or unindicted,” writes Andy McCarthy at NRO. As far as the law goes, he’s right. But not all informants have a formal CI relationship of the kind he’s talking about. The history of far-right groups is riddled with informants, and most of them don’t have any kind of formal status; it isn’t just people who have been threatened with prosecution or flipped for leniency after being charged. In some important cases, like those of klansmen Gary Thomas Rowe or Roy Frankhouser, CI status, or even just the appearance of it, has allowed violent criminals to be shielded from prosecution. It’s technically true that a CI is a “covert operative of a law-enforcement agency,” but in practice there is a lot of independence.

It doesn’t seem like an unreasonable assumption to me that informants played a big role organizing and carrying out the Jan. 6 protests that led to a riot, because it would be consistent with the FBI’s practice with these types of groups going back decades. But let’s look at some more specifics.

For instance, nobody has seen hide nor hair of the main organizer of Jan. 6 since then, Ali Alexander, though he is reportedly being probed by the FBI. I find this highly suspicious. A former Green Beret who joined the Oath Keepers spoke out in March about the FBI’s attempt to recruit him. Other Oath Keepers leaders have claimed they are being trained by law enforcement. The most notable footage from inside the Capitol that day was a videographer identified by left-wing groups in the Southwest as an agent provocateur. His videos show guys in Proud Boys gear entering the crowd from behind police lines and then back out again.

We also know that the leader of the Proud Boys was a “prolific” government informant:

Proud Boys chairman is here outside of #CPAC. I asked him about him about reports that he was a government informant. “There’s some truth to it,” he said. “I refuse to apologize for that.” pic.twitter.com/DFJrT3LXMx

All of this, combined with the feds’ documented interest in right-wing extremism in general and these groups in particular, not to mention their awesome surveillance powers, means the “intelligence failure” narrative about Jan. 6 is a little hard to believe. Democrats like Chuck Schumer and Nancy Pelosi have thrown out this accusation. It’s almost certainly bunk, but necessary to explain the apparent decision by the Capitol Police to stand down and let the rioters in, a fact that is likely to complicate some of these prosecutions.

According to Capitol Police and Senate investigators, the one piece of information that indicated to them that protesters intended to get violent dropped the evening before Jan. 6 in the form of a report from the FBI’s Norfolk office. Michael Bolton of the Capitol Police’s Inspector General’s office testified in April that the memo that went out from the FBI’s Norfolk office on the evening of Jan. 5 contained evidence demonstrators planned to break glass, cause trouble, and had mapped out the Capitol’s tunnels. He says:

According to the Department’s timeline, on January 5, 2021, at approximately 7 p.m. to 8 p.m., a USCP task force agent embedded with the FBI emailed the Intelligence Operations Section (IOS) a memorandum from the FBI Norfolk Division providing additional details regarding the January 6, 2021, event. …

The Acting Assistant Chief also stated that to his knowledge the FBI never formally sent the memorandum to USCP. The FBI Norfolk Division produced the document, and placed it on an FBI intranet or other internal system. Late in the evening on January 5, 2021, a USCP task force officer (TFO) assigned to the FBI Guardian Squad Task Force pulled the memorandum from the FBI system and emailed it to a USCP IOS email distribution list.

The Senate report from June characterizes this a little differently:

On January 5, an employee in a separate USCP intelligence-related component received information from the FBI’s Norfolk Field Office regarding online discussions of violence directed at Congress, including that protestors were coming to Congress “prepared for war.” This report, similar to other information received by IICD, was never distributed to IICD or USCP leadership before January 6. …

The USCP Inspector General concluded that a USCP analyst embedded with the FBI Joint Terrorism Task Force retrieved a copy of the SIR from an FBI intranet system. Records provided to the Committees show that the analyst, an employee within IOS—not IICD— received the SIR via the FBI Washington Field Office’s email. In a February briefing with the Committees, Ms. Pittman indicated that the USCP analyst forwarded the report to his supervisor, but it was not further circulated. Mr. Sund testified to the same account. The USCP Inspector General, however, concluded that the USCP analyst emailed the SIR to an IOS distribution list. USCP did not provide any documents to the Committees confirming either account. No one from IICD or USCP leadership received the SIR before January 6. The USCP Inspector General’s report noted that the “memorandum did not surface again until it was attached to an information package sent out late on January 6, 2021, after the security breach occurred.”

There are discrepancies between these two accounts, for starters, which Republicans should want to get to the bottom of. The Norfolk report contains a few specific threats of violence, which Jill Sanborn, FBI assistant director, characterized in testimony as “information off the Internet, unattributable to a specific person.”

Prior to Jan. 6, the FBI contended that they had no evidence demonstrators specifically intended to commit acts of violence. Evidence seems to have arrived less than 24 hours before the riot, but the FBI says they can’t attribute it to any individual.

This seems like nonsense to me, and if I were a congressional investigator, that Norfolk report is the first thing I’d ask for. Perhaps the FBI was telling the truth that there was no indication the protesters intended to get violent until less than a day before the riot. Perhaps they missed, or were concealing evidence of the rioters’ violent intentions from the Capitol Police prior to that point. Either way, I’d like to know who was sending those inciting messages the Norfolk Field Office flagged.

No member of Congress has asked any FBI official how they classify any of the three main radical groups present on Jan. 6. Published in 2017 by the Intercept, the “Domestic Investigations and Operations Guide” is the rulebook governing the Bureau’s practices. It stipulates who needs to sign off on undisclosed participation in political groups. The key distinctions are whether the investigation is “sensitive” or “non-sensitive” and whether the organization is “illegitimate” or “legitimate”; if it’s a sensitive investigation into a legitimate group, more people have to be read in. As the Intercept noted at the time, this schema is full of holes—no supervisory approval is needed, for instance, when informants volunteer information, if they’re thought to be in league with foreign governments, or if the group is “illegitimate”—but it’s a good starting point. It seems like a given that a demonstration at the Capitol would be a sensitive matter, but a simple question for Christopher Wray for which we do not yet know the answer is: Does the FBI consider the Oath Keepers, Proud Boys, and III%-ers legitimate or illegitimate organizations, and on what grounds?

Congress is the only body that can get answers about January 6, but unless Republicans ditch their deference to the security state, a commission is probably going to hurt more than it helps.

Americans left behind in Afghanistan