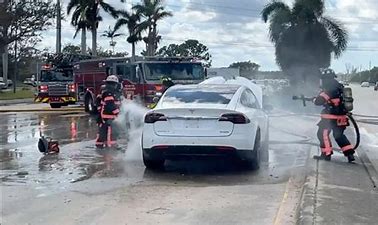 There’s something bizarre happening in Florida right now. It seems waterlogged electric vehicles are catching on fire after being submerged in floodwaters. Officials say this problem with electric cars is causing a huge challenge for firefighters; as this is something they’ve never dealt with before. “There’s a ton of EVs disabled from Ian. As those batteries corrode, fires start. That’s a new challenge that our firefighters haven’t faced before. At least on this kind of scale,” Jimmy Patronis, Florida’s chief financial officer and state fire marshal, tweeted this week. He went on to say that it takes special training and understanding of EVs to ensure these fires are put out quickly and safely.

Lithium fires are so hot and so dangerous… and then burn for a long time and take SO MUCH water to get them under control.

It takes special training and understanding of EVs to ensure these fires are put out quickly and safely. Thanks to @NCFRPio for their hard work. #Hurricanelan pic.twitter.com/oN0RvQTG2U

So, many of these electric vehicles that ended up underwater, are now just bursting into flames. How scary. Lithium is no joke, folks.

Yahoo Finance reported that the footage posted to social media shows the North Collier Fire Rescue District covering a white Tesla in water from both above and below to douse any possible sparks.

Mr Patronis and state Representative Bob Rommel were visiting the area when the district got the call about an electric vehicle fire. They joined the firefighters to see the problems that arise when trying to put out such fires.

“This is an issue many fire departments across [southwest] Florida are experiencing right now,” the district wrote on Facebook. “These vehicles have been submerged in salt water; they have extensive damage and can potentially be serious fire hazards … No one was injured on the fire, traffic interruption was minimal, and the crews remained on scene with the vehicle for hours to ensure it was extinguished.”

According to figures from the Department of Energy, Florida is second behind California in the number of registered electric cars, with more than 95,000 being driven around the state compared to the Golden State’s 563,000.

Breitbart also went on to say that having an electric vehicle during hurricane season in Florida is not the only potential disaster EV owners face.

This week, a man who bought a brand new $115,000 Hummer electric truck showcased how he was left stranded in the middle of the road — and the vehicle had less than 250 miles on it.

Similarly, a YouTuber recently demonstrated that buyers of GMC’s new electric Hummer better clear their calendars if the truck is running low on battery charge. The video he produced demonstrated that when the $80,000+ electric vehicle (EV) is plugged in to a regular house outlet, it will take over four days to fully charge. A special 240-volt charger still takes a full day to charge the vehicle.

A third, similar situation regarding EVs, involved another YouTuber — with 1.4 million followers — conducting an experiment with his brand new 2023 Ford F-150 Lightning electric pickup. The man tried to tow a 1930 Ford Model A truck with the electric vehicle, but it ended in “a complete and total disaster.”

This is scary, and yet again, something else that many people didn’t expect to happen. Seems like we’re learning as we go with electric cars, and instead of taking time to put training and processes in place, Biden and his radical climate changers just keep pushing these vehicles down everyone’s throat.

On top of this, we also don’t have the infrastructure to support these new electric cars, and in many cases, America just isn’t set up for a car that needs charging often for long periods of time. It’s not realistic for folks that live in more rural areas and travel far distances.

My grandmother had a hybrid that ran on gas and electricity that she loved. But when the battery went, it was too costly to fix, so the car basically became a “Junker.”

What an environmental nightmare.