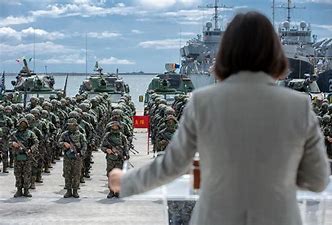 While most of the media focuses on American and European arms shipments to Ukraine, another problematic story has been brewing in the background. China has once again stepped up its rhetoric regarding Taiwan, issuing statements suggesting that military action might take place in the near future. They’ve simultaneously been running military exercises in the region, even as American lawmakers were visiting the Taiwanese government. Seemingly in response, the White House just approved another $95 million dollar arms package to Taiwan. And earlier this week, Senator Josh Hawley declared that we need to get that equipment to Taiwan “as quickly as possible.” Of course, the last thing we need at the moment is another invasion and another war on the opposite side of the world. (Free Beacon)

The United States must arm Taiwan “as quickly as possible” in response to China’s renewed threats to invade the country, Sen. Josh Hawley (R., Mo.) told the Washington Free Beacon on Wednesday.

Hawley, a member of the Senate Armed Services Committee, is spearheading legislation that would expedite U.S. arms shipments to Taiwan amid the Communist Party’s latest threat to unleash “violence” in the region. Hawley’s bill comes just days after the Biden administration approved a $95 million arms package to Taiwan, the second in recent months, to help defend the territory from a Chinese incursion. Hawley’s bill would fast-track the delivery of these arms.

The weapons package prompted a flurry of threats from China, which warned on Wednesday that any U.S. effort to support the island’s independence will “push the Taiwan people into the abyss of disaster.”

In addition to expediting this arms shipment, Hawley is sponsoring legislation that would add Taiwan to Country Group A:5. That’s a designation under the Department of Commerce’s Bureau of Industry and Security, giving it more unrestricted access to trade. That’s not the same as recognizing Taiwan as an independent nation, but it’s one step closer. And that’s something that China has always insisted would provoke a military invasion.

Our gratitude to @HawleyMO for introducing the #Taiwan🇹🇼 Weapons Exports Act. The legislation spotlights the #US🇺🇸 senator’s rock-solid commitment to #StandWithTaiwan, & is another vote of congressional confidence in our country & its 23.5 million people. https://t.co/PqTU2w2vHK

I have no problem with arranging arms sales to Taiwan. We’ve been doing it for ages and it’s in keeping with our traditional policies regarding their government. But we seem to be doing it in a particularly aggressive manner at the moment, almost daring China to do something about it. Is that wise?

Part of the problem is our longstanding lack of a coherent policy when it comes to Taiwan. The United States has long maintained that we support the “One China” theory, while simultaneously promising to help them defend themselves against any potential Chinese invasion. But helping them defend themselves is very different from agreeing to send our military to their rescue and defend them. China is aware of this distinction. There seems to be an eerie parallel between our stated position on Taiwan and Joe Biden’s promise to not send our troops into Ukraine to fight Russia even as we arm the Ukrainians to the teeth.

Personally, I’d hoped that China would take note of the massive global sanctions that are fracturing the Russian economy at the moment and conclude that invading Taiwan would provoke the same response, making it a bad idea. And perhaps that will still turn out to be the case. China is always full of bluster when it comes to the island across the strait. But at the same time, keep in mind that Joe Biden basically gave Russia the green light to invade Ukraine by promising that there wouldn’t be a military response provided no NATO countries were hit. If that’s the lesson that China is taking away from this entire mess, our traditional policy toward Taiwan could be seen as a similar free pass to invade the island and a belief that they could survive the same sorts of sanctions.

I hope the latter isn’t the case, but the world is just going crazy these days. Trying to predict what either China or Russia will do from moment to moment is nearly impossible.