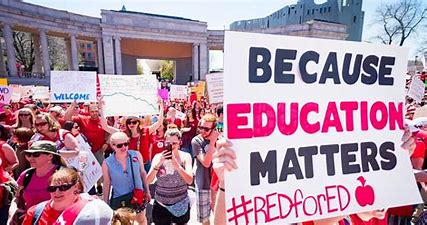 “People are going to disagree on a lot of these issues,” Matt Beienburg, the Goldwater Institute’s director of education policy, told NBC News. “Transparency is something I think that at least allows for that conversation to know what is being taught. Everybody should be able to rally around the fact that we shouldn’t be teaching something in secret.”

Public schools have become battlegrounds for culture wars over mask rules, COVID-19 vaccinations, school reopenings, critical race theory, and remote learning. Parents have called on school boards across the country to allow them more of a say in what their children are being taught.

In Virginia, Gov. Glenn Youngkin defeated Democrat Terry McAuliffe with the help of parents who were fed up with the current administration and the state’s policies, and made it clear they wanted to see change in the state’s education system.

He promised to ban concepts like critical race theory and to put parents first. McAuliffe slipped out of favor when he claimed critical race theory was a “racist dog whistle” and made the assertion that he doesn’t think parents should be telling schools what they should teach.

“We reject the notion that parents shouldn’t have a say in what their kids are learning in school,” Florida Gov. Ron DeSantis said in a Jan. 11 speech.

Chris Rufo, journalist and anti-critical race theory proponent, has been critical of teachers unions who “don’t want families to see what’s happening in the classroom.”

The teachers unions don’t want parents involved in their children’s education. They don’t want families to see what’s happening in the classroom.

It’s time we change that. We need to give transparency, information, and power back to parents. Sunlight is the best disinfectant.

The Goldwater Institute, along with the Manhattan Institute, have published model legislation that encourages curriculum transparency.

But opponents of transparency legislation believe it would put an unnecessary burden on teachers and restrict the materials they teach out of fear of criticism, according to experts, NBC reported.

Legislation supporting more educational transparency through the use of “neutral sounding language” is “potentially just as censorious,” Jon Friedman, the director of free expression and education at PEN America, a nonprofit group that promotes free speech, told NBC News.

PEN America has even equated such laws to “educational gag orders.” Friedman said the newly proposed transparency laws are meant to stoke concern over lessons about race and gender in schools.

A curriculum transparency bill proposed in Missouri would require teachers to post instructional material along with descriptions of the content.

Conservatives argue educators should have nothing to hide, while Democrats believe it will be used as an “easy tool to censor anything controversial,” according to Missouri state Rep. Maggie Nurrenbern, NBC News reported.

The Goldwater Institute issued a policy brief in January 2020 advocating state curriculum transparency laws, which Beienburg said could be implemented if teachers posted links to instruction materials on public Google Docs, NBC News reported. He said this would allow teachers to pull ideas from other educators, which would also lighten their workload.

“The status quo right now is that new teachers come in and have to start from scratch,” he said. “This is also saving teachers time from reinventing the wheel over and over again.”