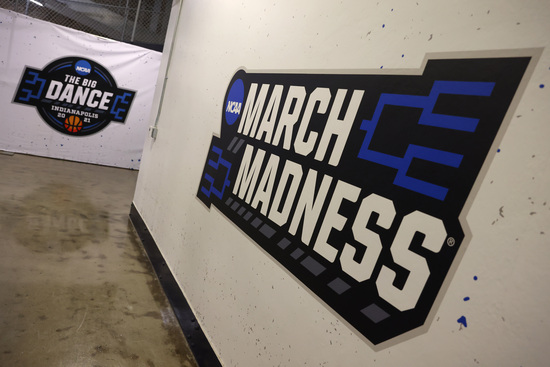 There’s the right tasty-looking and rather high-end spread the men’s teams and their coaches got in Indianapolis, full of options.

Then there’s what the women got. That’s University of Oregon sophomore Sedona Prince running the camera.

Okay, so their weight room is a joke, and their swag bag is trash but at least they’re eating well in the NCAA women’s tournament bubble. Oh. Wait. 🤢 pic.twitter.com/O7WDC2sMIT

The women were also not allowed to order takeout meals to avoid the mystery patties; if they didn’t like lobster mac and cheese, the men totally could.

I’ve talked to multiple players in the bubble and they’re, “only eating the snacks they brought.” They can’t order food because no one can come to the hotel. If you don’t eat meat you can’t eat most of the meal. So expect a lot of your favorite players to be “running on snacks.”

Then there’s the notorious differences in training facilities, also showcased by Prince.

Can’t forget the swag disparity. The women’s merch doesn’t even have a year on it, and some of it just says “Women’s Basketball,” instead of the tourney name, making it usable for future events where the NCAA planned to give those players the short shrift.

There were also disparities reported in the availability of volunteers for player errands and even vending machines. Even the provision of transcription services for press conferences is unequal. There’s also this:

Additionally, coaches still nursing babies were forced to choose between feeding their child or reducing their team’s support roster.

The NCAA scrambled to make excuses instead of admit it just gave no fucks about its women athletes and coaches, who are scheduled to bring in about $42M in revenue off the tourney alone. As noted by Prince above, they blamed a lack of space for the lack of training equipment—nope.

“We acknowledge that some of the amenities teams would typically have access to have not been as available inside the controlled environment. In part, this is due to the limited space and the original plan was to expand the workout area once additional space was available later in thee tournament. However, we want to be responsive to the needs of our participating teams, ad we are actively working to enhance existing resources at practice courts, including additional weight training equipment.”

Brands upon brands stepped up to right the wrong, but it’s unclear as of this writing whether the NCAA accepted any such offers. Either way, by late Saturday morning, days after players arrived for the tournament, and , the San Antonio women’s facility was reopened, with far more equipment … and serious bat mitzvah vibes.

Not sure why the event planners opted for uplighting, but so it goes.

As a former (though not even slightly elite) collegiate athlete myself, this pile of steaming BS cuts right at the heart of the lessons that sports and coaches teach us about taking responsibility for our actions. There’s also the air of “we’re only doing something about this ‘cuz we got caught.”

One of the most disturbing things about the disparity between the men’s and women’s bubbles is the NCAA’s arrogance – like they really thought no one would care enough to raise all these issues. They didn’t even try to not get caught- the disrespect for the women was blatant.

But as noted above, the disparities don’t end at weights, steak, t-shirts, and free body wash. The NCAA doesn’t even equally value the athletes’ health.

The women get worse swag bags. Ok, sexist as hell, but not the biggest deal.

The women get worse weight rooms. Impacts their ability to show their greatness – bigger deal.

But that’s not enough. They’re also getting substandard COVID testing, too? You f*ckin’ kiddin’ me? https://t.co/buaUlUqDBy

As reported by The New York Times:

(Late Friday), Mark Emmert, the president of the N.C.A.A., acknowledged an additional startling imbalance between the men’s and women’s tournaments: different methods of coronavirus testing for athletes and for others inside the tournaments’ “controlled environments.”

The method in use at the men’s event in Indiana is called a polymerase chain reaction test, or a P.C.R. test, which is considered the gold standard of virus testing. It is highly sensitive and almost always detects infections. The method for the women’s tournament in Texas is a rapid antigen test, which is cheaper and generally provides quicker results but is less sensitive and more likely to yield false negatives.

“We have complete confidence in all the medical protocols that have been put together,” Emmert said, adding that the N.C.A.A. had used national and local medical advisers to formulate plans for the events. “All of the health experts say the protocol that they’re using right now in all our venues and all our championships is one that has no difference at all in our ability to mitigate risk.”

Emmert should have checked with the FDA, who says that “antigen tests have a higher chance of missing an active infection.” The tests used for the women’s tournaments, according to the FDA, cannot “definitively rule out active coronavirus infection.”

What Emmert didn’t say out loud about the different tests? Like the food, like the swag, and like the training facilities, the women’s tourney got the cheaper option, while the men got that “gold standard.”

Of course, any woman who’s played a sport, or, like, ever had a job, is unlikely to be surprised by this blatant, unapologetic inequality. That doesn’t mean it should continue, or that we all shouldn’t be outraged at what appears to be multiple violations of Title IX.

Title IX requires the equal treatment of female and male student-athletes in the provisions of: (a) equipment and supplies; (b) scheduling of games and practice times; (c) travel and daily allowance/per diem; (d) access to tutoring; (e) coaching, (f) locker rooms, practice and competitive facilities; (g) medical and training facilities and services; (h) housing and dining facilities and services; (i) publicity and promotions; (j) support services and (k) recruitment of student-athletes.

There are also the less-tangible inequalities to consider. en’s sports are branded simply by the sport’s name, while women’s sports always, well, have “women” placed before it.

Men play basketball, while women play women’s basketball—sometimes even with “Lady” added to their mascot name on their jerseys. It’s not just college. It’s not the MNBA and the WNBA, after all. Women are always othered.

Legendary coach Muffet McGraw, who led her Notre Dame team to nine Final Fours and two national championships before retiring last year, laid it all the way out.

That is also some tiny type!

While I appreciate the outrage, the fact that there’s a huge disparity between men’s and women’s sports is hardly breaking news. We have been fighting this battle for years and frankly, I’m tired of it. Tired of turning on the tv to see “NCAA basketball tournament” only to realize that of course means men’s. Tired of seeing Twitter accounts called March Madness and Final Four that are run by the NCAA but only cover men’s bball. Tired of having to preface everything we do with the word “Womens” which would be fine if the men had to do the same, but they don’t, and when they don’t it makes us look like the JV tournament to their event.

The fact that there are inequities in facilities, food, fan attendance, and swag bags is not what bothers me. What bothers Mme is that no one on the NCAA’s leadership team even noticed. While corporations across the country are scrambling to hire women and set up diversity & inclusion teams, the NCAA had an opportunity to highlight how sport can be a place where we don’t just talk about equality, we put it on display. To say they dropped the ball would be the understatement of the century. This is the issue that women have been battling for decades. We have accepted our fate for far too long. We have taken the crumbs from the table we don’t even have a seat at and we didn’t complain. We were happy to be there. After winning a national championship. we didn’t proudly present a big check to our university, we got a pat on the back and a “way to go, (girls.)” Well time’s up gentlemen. This generation of women expects more and we won’t stop until we get it.

The failure to brand sports by gender (if that gender is male) reminds me of how uncomfortable white people can get when they hear themselves described as “white,” because they’re so used to being just “people,” the default. As Toni Morrison famously said, “In this country, ‘American’ means ‘white.’ Everyone else has to hyphenate.” In the sports world, “athlete” means “male.”

There is of course, the urge to cry “but revenue!” in a misguided rush to defend or explain away such inequalities. I saw it here, in the comments on my colleague’s piece on this fiasco just yesterday, and there are definitely plenty of similar rally cries on Twitter.

It’s true: The men’s tourney is by far, the most profitable of endeavors within the billion-dollar enterprise that is the NCAA, and men’s basketball as a sport gets the biggest share of NCAA revenue.

The revenue argument crumbles quite a bit when you consider that the lowest-seeded, tiniest men’s tournament teams likely bring in less “revenue” than top women’s teams like UConn or Stanford or McGraw’s Notre Dame squads, but those tiny programs still got reliable COVID-19 testing, and healthy, decent food ahead of their biggest games of their career to date. Not because of the revenue they’ve generated, but because they’re tiny programs in a men’s sport. The men’s program at, say 15-seed Oral Roberts University, who upset 2-seed Ohio State University, will receive a seven-figure payday just for winning that one game.

The winner of the entire women’s tournament, meanwhile, won’t get a dime.

It’s also true that so-called “marquee sports” make the most money for their university athletic departments, too. Track and field, wrestling, swimming, softball, fencing, lacrosse, soccer, and baseball? Regardless of the gender of those athletes, those sports don’t bring in the big bucks, and benefit greatly from the funds brought in by more popular sports, like men’s basketball and football.

But you have to ask yourself, who decides which sports go on the damn marquee? Days before the disparities controversy, NBC Sports’ Alex Azzi answered that question.

These writers are used to men’s sports – known to them as just “sports” – being the norm.

While I won’t argue the fact that men’s college basketball is currently more popular than women’s, there is nothing inherent about it.

Instead, the centering of men’s basketball as the norm is the result of hundreds, perhaps thousands, of decisions to prioritize, promote, and invest in men’s basketball. Over time, these decisions have become self-fulfilling prophecies. A study of the 2014 NCAA men’s and women’s tournaments found that – for every story local affiliate stations aired about the women’s tournament – there were 13 stories about the men’s. Audiences are told that the men’s games are worth tuning into, and so they tune in.

The media and marketing machine have shaped what all of us tune into, of course, but we can change that indoctrination. If you’re watching the men’s tourney, consider tuning into a woman’s game or seven. Not watching at all? Try a woman’s game anyway.

Be the change, just like Sedona Prince (whose Oregon Ducks play Monday night) and her colleagues. They had great role models in women athletes who came before them, like the remarkable athletes of the WNBA.