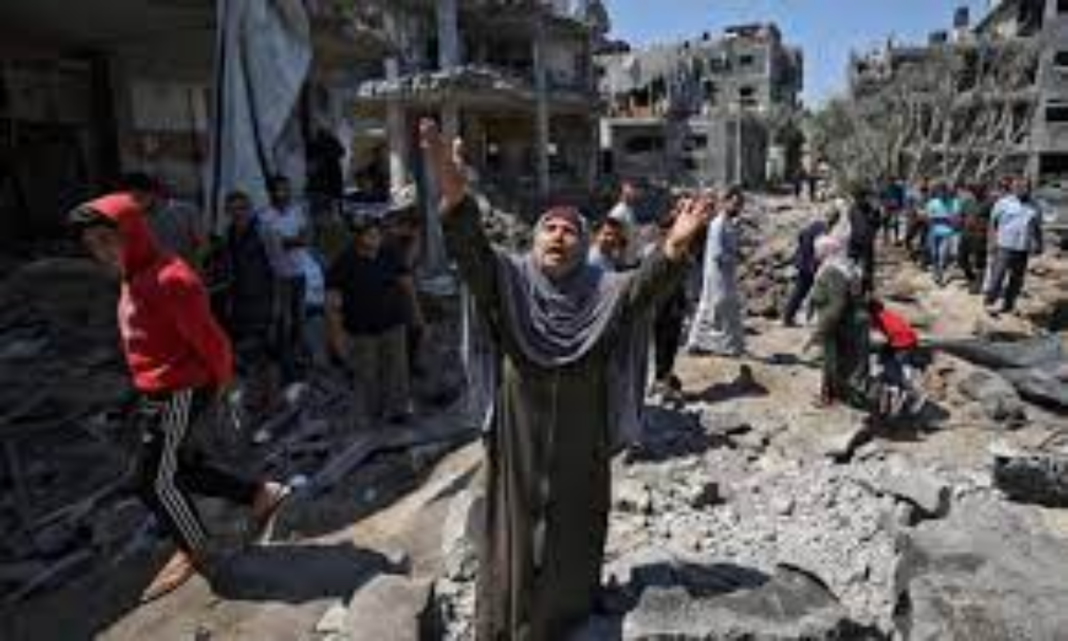 An IDF air raid on a densely populated refugee camp in Gaza has killed at least eight people, the majority of them children, according to multiple reports, as Israeli warplanes continue to hammer the blockaded Palestinian enclave.

The IDF dropped at least three bombs on a three-story home in the al-Shati refugee camp early on Saturday morning, according to a witness cited by the Times of Israel. While Gaza Health Ministry spokesman Ashraf al-Qudra initially put the death toll at seven, he said the figure was expected to rise, as other victims were believed to be buried in rubble. At least 15 others were injured.

“I saw the bodies of four people, including children, being rushed to the hospital. I could not endure and ran back to my home.” said the witness, Said al-Ghoul, a resident of the camp. He claimed that no warning was given before the strike.

🚨 Shati’ refugee camp massacre A doctor is telling Al Jazeera that medics tried to save as many body parts as possible for the 5 children and 2 women killed so they could be buried. Death toll expected to increase as bodies still trappedOnly survivor is baby Omar, two months pic.twitter.com/BNN6y9sEV2

Subsequent reports noted eight fatalities as a rescue operation got underway, including six children and two women, many said to belong to the Abu Hatab family. Photos purporting to show the aftermath of the strike amid the rescue effort have circulated online.

Soon after the deadly strike, Hamas, the political party and militant group that governs Gaza, fired yet another volley of rockets into southern Israel in retaliation, the Times reported.

Despite putting out a steady stream of commentary throughout the offensive, the IDF has yet to acknowledge the camp bombing, instead stressing that its operations are directed at rocket launch sites and other military targets – often hidden among civilian infrastructure. It claims more than 2,000 Hamas rockets have been fired since Monday, when the latest bout of violence kicked off.

Also known as the ‘beach camp’ for its close proximity to Gaza’s Mediterranean coast, al-Shati is the territory’s third largest refugee site, home to 86,000 residents, who are packed into just 0.3 square miles (0.5km), according to the UN. The agency claims the crowded camp is among the most densely populated areas on Earth.

One of eight official refugee camps in Gaza, al-Shati was established in 1948 after tens of thousands of Palestinians fled their homes and villages during the Israeli War for Independence, also known to Palestinians as the ‘Nakba’, or ‘catastrophe’, which saw 750,000 Arabs displaced from territory that became Israel. The refugee population has since swelled to around 5.7 million worldwide, according to the UN, with over 1.3 million remaining in Gaza.

Despite repeated calls for a ceasefire from international bodies, hostilities have continued into the sixth day as of Saturday morning, seeing at least 137 Palestinians killed, including 36 children, and nearly 1,000 wounded.

At least nine Israelis have also perished in rocket fire, among them a six-year-old girl and one IDF soldier, in addition to around 500 injured.

Hamas’ first rocket barrage on Monday night followed days of heated protests over looming evictions of Palestinian residents of East Jerusalem, prompting police crackdowns and violent clashes with security forces that left hundreds injured. IDF bombing raids started soon after, seeing hundreds of strikes on Gaza, some leveling high-rise structures, including apartment blocks and media offices. The military also claims to have struck dozens of Hamas targets and assassinated several senior officials in the organization, insisting that it takes precautions to avoid killing civilians and that the bombing is defensive.