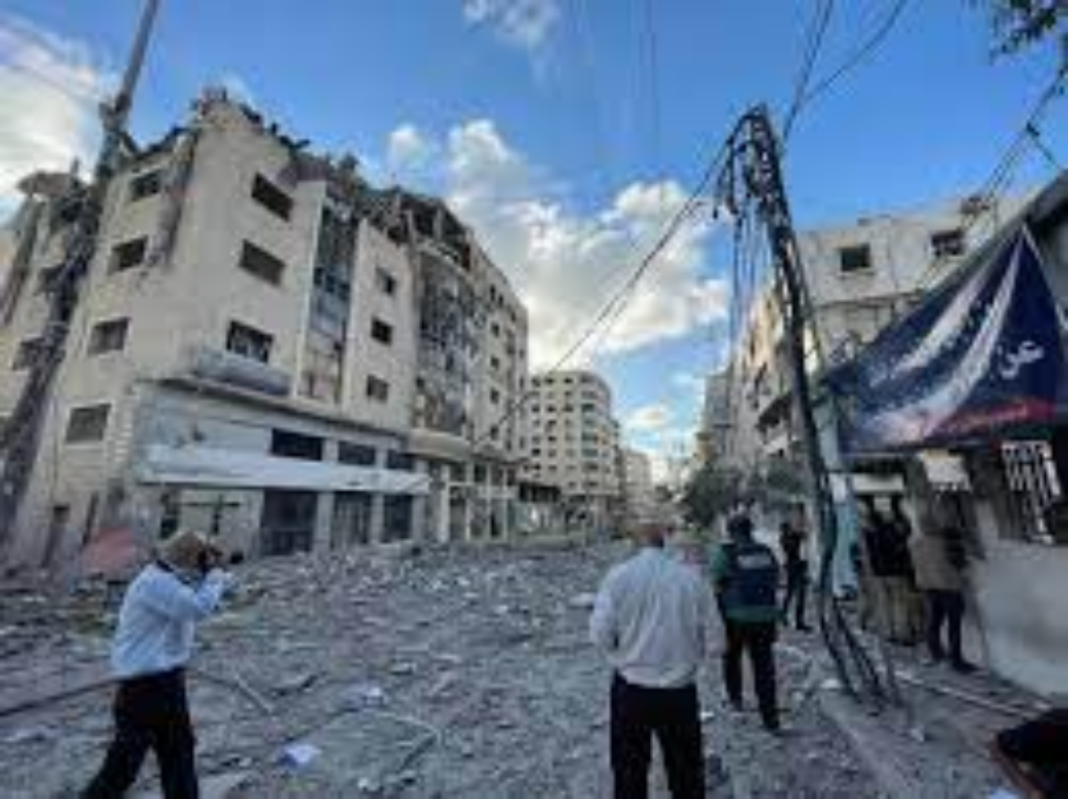 Gaza’s primary Covid-19 testing and vaccination site was taken offline after it was struck in an Israeli air raid, Palestinian health officials said, warning that Tel Aviv’s bombing campaign will drive a surge in the pandemic.

The strikes triggered a “complete halt” to immunizations, virus screenings and telemedicine services at Gaza’s al-Rimal clinic on Monday, the territory’s Health Ministry said on Monday, noting that its own headquarters was also damaged in the bombing.

“The Israeli occupation’s targeting of the Ministry of Health and al-Rimal Clinic caused a complete halt to the work of the only central laboratory examining coronavirus tests in [Gaza],” Health Ministry Undersecretary Youssef Abu al-Rish said in a statement, condemning the airstrikes as “a heinous crime aimed at dissuading the ministry from continuing its humanitarian work.”


In a separate statement, the ministry said that Israeli forces were targeting “densely populated residential areas,” sending some 40,000 families to crowded shelters, which have become “a dangerous environment for the rapid spread of Covid-19.” It urged the international community to provide “critically needed personal protection equipment” for the shelters.

The official announcement followed similar reports from both the Palestine Liberation Organization (PLO), as well as the territory’s UN mission, which relayed a warning from UN chief Antonio Guterres that the fighting could “unleash an uncontainable security and humanitarian crisis” in Gaza.

The UN’s Gaza relief agency, the UNRWA, has also voiced fears that the eruption of violence could fuel a surge in the pandemic, with agency official Matthias Schmale observing that Israeli airstrikes were sending large numbers of unvaccinated Palestinians into cramped shelters, saying they “could turn into mass spreaders.”

The fighting entered its eighth day on Monday, bringing the death toll in Gaza up to 212 people, including 61 children, as well as more than 1,400 wounded. At least 10 Israelis have also perished in rocket fire, among them two children and one soldier.

With Gaza under a tight Israeli blockade, health agencies have found themselves ill-equipped for the ongoing health crisis, seeing major shortages in tests, treatments and vaccines. The latest bout of violence has only made matters worse, overwhelming Gaza’s hospitals with dead and wounded, and even killing some healthcare professionals.

A massive Israeli bombardment on Gaza’s al-Wehda district on Sunday left multiple doctors dead, including Ayman Abu al-Ouf, the head of internal medicine at al-Shifa hospital – Gaza’s largest medical center – and a key figure in the region’s coronavirus response effort. Members of al-Ouf’s family, as well as neurologist Mooein Ahmad al-Aloul, were killed in the attack, which saw some 150 missiles fired into the neighborhood, razing several homes and at least one apartment block, according to Al Jazeera.

IDF strikes also “severely damaged” a Red Crescent office based in a large commercial building on Monday, a group spokesperson said, while bombing over the weekend struck a Doctors Without Borders clinic, leaving several rooms unusable.

As Israel continues its aerial and artillery bombardment of #gaza many MSF staff and patients have been forced to flee their homes for safety. The damage to our clinic shows no place in Gaza is safe. pic.twitter.com/m4yYn1Nm6x

Last night, an MSF clinic in #Gaza where we provide trauma and burn treatment was damaged by Israeli aerial bombardment, leaving a sterilization room unusable and a waiting area damaged. No one was injured in our clinic, but people were killed by the bombing. pic.twitter.com/Dwol0EPXEr

Though plans for another substantial testing site in Gaza were reported in April 2020, set to be spearheaded by the Beijing Genomics Institute and Israel’s AID Genomics, the current status of the project is unclear. The lab was said to be able to carry out up to 3,000 screenings per day, however shortages in test kits may have made that impossible. Last December, Gaza health officials reported that only one lab was able to carry out tests, and that it had also run out of supplies.

Fighting in Gaza kicked off last Monday following days of heated protests over the looming eviction of Palestinian residents in East Jerusalem, seeing harsh police crackdowns and hundreds injured in the resulting clashes. An incident at Al-Aqsa mosque, in which Israeli security forces fired stun grenades and tear gas at worshipers, served as a flashpoint, with Hamas and other militant groups firing their first volley of rockets into Israeli cities soon after. The IDF has launched hundreds of deadly airstrikes in response.

Critical Race Theory is the cancer in our Public Schools