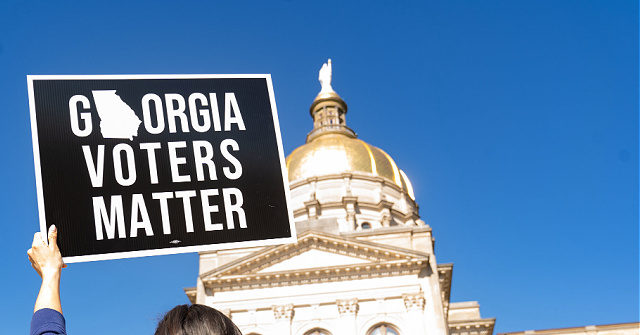 The executive director of Heritage Action praised the new Georgia “Election Integrity Act of 2021,” signed into law by Republican Gov. Brian Kemp on Thursday evening, as a model for other states to follow.

“Georgia legislators have been leaders in the fight to protect our elections. These lawmakers have worked tirelessly to make Georgia’s elections more secure, fair, and transparent while promoting voters’ rights, and today they achieved a historic victory,” Heritage Action Executive Director Jessica Anderson said in a statement released late Thursday.

“Reforms to make voter ID requirements and early voting access more consistent statewide, modernize the state’s voting rolls, and ensure robust oversight of voting and elections will protect Georgia’s votes and make the state a model for the rest of the country,” Anderson added.

With the current session of the Georgia General Assembly scheduled to end next week on March 31, SB 202 moved with lightning speed from a bill scheduled for a floor vote on the Georgia House of Representatives to a statute in a matter of hours on Thursday.

Georgia Democrats reacted to the bill’s passage and Kemp’s signing it into law unfavorably, as Breitbart News reported:

Georgia State Patrol officers detained a Democrat member of the Georgia House of Representatives on Thursday after she interrupted the signing of an election integrity bill by Gov. Brian Kemp (R).

According to individuals’ featured footage shared to social media, state Rep. Park Cannon was detained by officers on the scene after she “knocked on the governor’s door.”

Those early reactions indicate the national battle between Republicans, who characterize bills currently under consideration in several other state legislatures as election integrity reforms, and Democrats and most mainstream media outlets, who characterize them as “voter suppression,” is about to heat up.

The national attention on election law legislation is also heating up as H.R. 1, which was passed through the U.S. House of Representatives this month, has moved to the U.S. Senate for consideration. Democrats have named that bill “The For the People Act,” while Republicans and conservatives call it “The Corrupt Politicians Act.”

One key provision of the new law, whose overarching purpose is to “comprehensively revise elections and voting,” is a direct rebuke of current Georgia Secretary of State Brad Raffensperger, whose controversial decisions and open political combat with former President Donald Trump defined the 2020 presidential election in the state.

For decades, the five-member Georgia State Election Board has been responsible for the administration of elections in the state, and the secretary of state has been the most influential member of that five-member board.

With the signing of S.B. 202, “The Election Integrity Act of 2021” into law on Thursday, the secretary of state has now been removed as a voting member of the state election board permanently.

Key provisions of the bill reduce the role of the secretary of state in the administration of elections. The bill:

Another key provision of the new law limits the number and location of drop boxes. An estimated 600,000 vote-by-mail absentee ballots (out of five million votes cast) were deposited in more than 300 drop boxes established throughout the state in the 2020 presidential election.

According to the Emergency Election Rule promulgated by the Georgia State Election Board in July 2020, documentation of the transfer of ballots from these drop boxes to the local county registrars or their designees was supposed to be memorialized in ballot transfer control forms. When asked by Breitbart News in December about the number, location, and status of these ballot transfer forms, a spokesperson for the secretary of state said they had no idea and that it was the responsibility of the state’s 159 counties to keep track of these ballot transfer forms:

Georgia Secretary of State Brad Raffensperger has no idea how many of the 1.3 million absentee ballots counted in the state in the November 3 general election were delivered by mail and how many were collected and delivered from the 300 absentee ballot drop boxes he and the Georgia State Election Board approved for use in the election.

“We don’t know how many absentee ballots arrived by mail versus drop box. The counties can tell you,” a spokesperson for Raffensperger told Breitbart News on Wednesday.

The new law states, “the board of registrars may establish additional sites as additional registrar’s offices or places of registration for the purpose of receiving absentee ballots … and for the purpose of voting absentee ballots advance … provided that any such site is a building that is a branch of the county courthouse, a courthouse annex, a government service center providing general government services, another government building generally accessible to the public, or a location building that is used as an election day polling place, notwithstanding that such location building is not a government building.”

In other words, the placement of drop boxes outside of official government building locations is prohibited.

In addition, the number of drop boxes is limited:

Some supporters of the new law say that it prohibits private funding for the administration of elections, the controversial practice that many Republicans believe resulted in turning local election offices around the country — and Georgia in particular — into Get-Out-the-Vote arms of the Democratic Party.

[The] controversial practice pioneered by Facebook founder and CEO Mark Zuckerberg and his wife Priscilla Chan through $419 million in donations to nonprofits Center for Tech and Civic Life (CTCL) and the Center for Election Innovation and Research (CEIR) played a key role in determining the outcome of the 2020 presidential election, particularly in five key battleground states where President Biden narrowly defeated former President Trump: Georgia, Arizona, Wisconsin, Michigan, and Pennsylvania.

During Georgia’s 2020 election, the CTCL donated more than $24 million to four counties–Fulton, Gwinnett, Cobb, and DeKalb–where Biden outperformed Hillary Clinton by more than 200,000 votes, and the CEIR donated an estimated $3 million to Georgia Secretary of State Brad Raffensperger’s office “for the purpose of educating voters about election rules and process.”

While the new Georgia law signed by Gov. Kemp on Thursday prohibits local election superintendents from accepting private funding for the administration of elections, one election integrity expert says it contains a loophole.

Section 9 (b) of the 95-page law states, “No superintendent shall take or accept any funding, grants, or gifts from any source other than from the governing authority of the county or municipality, the State of Georgia, or the federal government.”

Phill Kline, executive director of the Amistad Project of the Thomas More Society, told Breitbart News that the provision’s failure to explicitly prohibit county governments, municipalities, or the State of Georgia from accepting private funding is a loophole that should be closed. Kline stated that a bill passed by the Arizona House of Representatives this month that specifically prohibits any state government, county government, or municipal entity from accepting or expending private funds for the administration of elections is “far superior” to the new Georgia statute.

Kline’s critique may have influenced the final version of the bill that became law on Thursday, which included a new provision. Section 9 (c) of the new law states, “The State Election Board shall study and report to the General Assembly a proposed method for accepting donations intended to facilitate the administration of elections and a method for an equitable distribution of such donations state wide by October 1, 2021.”

Heritage Action’s Anderson praised the work of grassroots activists in securing the passage of the election reform legislation.

“Grassroots activists across Georgia worked with lawmakers every step of the way to restore trust and transparency in the electoral process — every voter has the right to trust that their vote counts. Heritage Action is proud to have partnered with over 20,000 activists in the state to help secure these reforms, and we look forward to SB 202 being signed into law,” Anderson said.