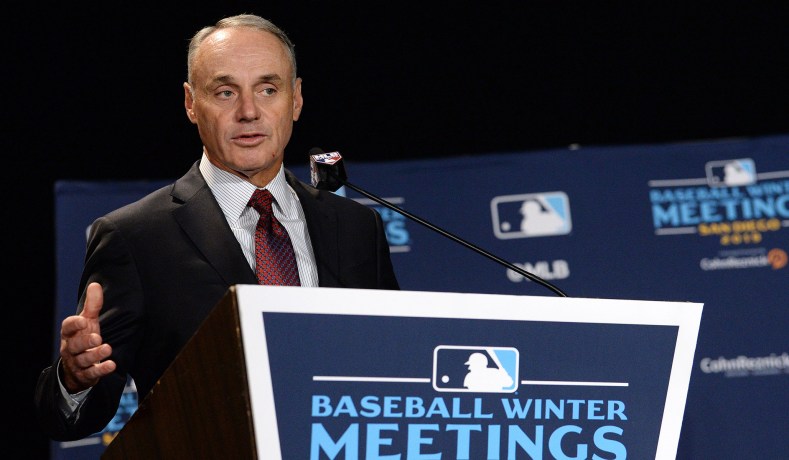 Major League Baseball (MLB) commissioner Rob Manfred announced that it would not be holding its 2021 All-Star Game or draft in Georgia as originally planned because of the state’s much — and unfairly — maligned new elections law. Here’s the full statement:

Over the last week, we have engaged in thoughtful conversations with Clubs, former and current players, the Players Association, and The Players Alliance, among others, to listen to their views. I have decided that the best way to demonstrate our values as a sport is by relocating this year’s All-Star Game and MLB Draft.

Major League Baseball fundamentally supports voting rights for all Americans and opposes restrictions to the ballot box. In 2020, MLB became the first professional sports league to join the non-partisan Civic Alliance to help build a future in which everyone participates in shaping the United States. We proudly used our platform to encourage baseball fans and communities throughout our country to perform their civic duty and actively participate in the voting process. Fair access to voting continues to have our game’s unwavering support.

We will continue with our plans to celebrate the memory of Hank Aaron during this season’s All-Star festivities. In addition, MLB’s planned investments to support local communities in Atlanta as part of our All-Star Legacy Projects will move forward. We are finalizing a new host city and details about these events will be announced shortly.

What a humiliating spectacle for the league and the country. Manfred doesn’t state what the MLB’s problems with the bill are because he either can’t or is embarrassed to have to articulate them out loud. The move comes after President Biden — who called the law “Jim Crow on steroids” — said he agreed with the suggestion that the MLB move the All-Star Game, and as he continues to deceive the public about the legislation’s contents. Here’s the Washington Post‘s Glenn Kessler on the president’s mendacity. First he quotes Biden:

“What I’m worried about is how un-American this whole initiative is. It’s sick. It’s sick … deciding that you’re going to end voting at 5 o’clock when working people are just getting off work.” (March 25)

“Among the outrageous parts of this new state law, it ends voting hours early so working people can’t cast their vote after their shift is over.” (March 26)

“You are going to close a polling place at 5 o’clock when working people just get off. This is all about keeping working folks and ordinary folks that I grew up with from being able to vote.”

Then Kessler responds to the president’s claims:

In reality, Election Day hours were not changed and the opportunities to cast a ballot in early voting were expanded. The law made a modest change, replacing a vague phrase “normal business hours” — presumed to be 9 a.m. to 5 p.m. — to a more specific 9 a.m. to 5 p.m. time period. (Some rural county election offices worked only part time during the week, not a full eight-hour day, so the shift to more specific times makes it clear they must be open every weekday for at least eight hours.) But that’s the minimum.

Under the new law, counties have the option to extend the voting hours so voters can start casting ballots as early as 7 a.m. and as late as 7 p.m. — the same as Election Day in Georgia. Moreover, an additional mandatory day of early voting on Saturday was added and two days of early voting on Sunday were codified as an option for counties.

The White House did not provide an explanation for Biden’s erroneous statement, which has turned up in a news conference, an official statement and an interview. Astonishingly, at an April 1 news briefing, White House press secretary Jen Psaki defended the president’s comment, incorrectly arguing “it standardizes the ending of voting every day at 5, right?”

The truth is that the Georgia bill codifies drop boxes for ballots as a permanent feature of the state’s voting system (prior to 2020 and the COVID-19 pandemic they had never been used there before), expands early voting, and institutes a voter ID requirement that is broadly supported by Americans of all races. Jim Crow it is not, much less a performance-enhancing drugged-up version of it.

Clearly Democrats, even the supposedly moderate and decent Joe Biden, will continue to tendentiously stoke fears and pressure private citizens in pursuit of certain political ends. It’s on us, then, to show some courage in standing up to this demagoguery and standing for a pluralistic, liberal society.

Just don’t count on Rob Manfred to join us.