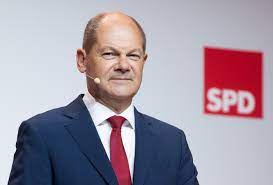 Germany’s center-left Social Democrats (SPD) voted on Sunday for the current Finance Minister Olaf Scholz to be their choice for chancellor should they win the September general election.

The former mayor of Hamburg won 96.2% of the votes from the almost 600 SPD delegates who were taking part in this weekend’s online party conference.

Sunday’s result was far from a surprise, as the party leadership had already nominated him for the candidacy — more than a year before the election.

The now officially confirmed chancellor candidate gave his thanks to the party in a tweet, saying “I want to thank everyone for this great result. It is the foundation for the change that we will work towards. Now, let’s get to work!”

Who are the other chancellor candidates?

The top three parties, according to polls, have now all officially decided on their candidates.

The conservative bloc made up of the Christian Democratic Union (CDU) and its Bavarian sister party the Christian Social Union (CSU) picked state premier of North Rhine-Westphalia Armin Laschet as their replacement for current Chancellor Angela Merkel. The CDU/CSU are currently in a governing coalition with the SPD.

The SPD was able to avoid the drawn-out process that the conservatives succumbed to, but are now also facing the increasingly popular Green party and its recently chosen chancellor candidate, Annalena Baerbock.

“I can contribute my experience, my strength and my ideas,” Scholz said on Sunday, highlighting his record over Baerbock who has been criticized for lacking political experience.

The 62-year-old SPD veteran has served as Germany’s finance minister and vice-chancellor since 2018.What are Scholz’s campaign promises?With the SPD’s campaign kicking off in earnest, Scholz has pledged to socially transform the economy and to introduce better conditions for workers, including an increase in the minimum wage.His election promises included a high level of public investment to strengthen the health system, schools and public transport.”I want to improve the very fundamentals of everyday life,” he said.

The lawmaker also touted his environmental plans, days after having put forward a more ambitious government proposal to reduce greenhouse gas emissions to zero by 2045.Recent opinion polls have put the SPD behind the CDU/CSU, at around 16%, with the Greens increasingly taking the top spot with an estimated 26% of the votes.

While you’re here: Every Tuesday, DW editors round up what is happening in German politics and society, with an eye toward understanding this year’s elections and beyond. You can sign up here for the weekly email newsletter Berlin Briefing, to stay on top of developments as Germany enters the post-Merkel era.

Gwen Stefani accused of “cultural appropriation” because of her love of...

UAE:There is no Future in oil