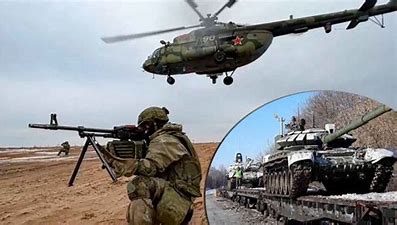 It was only a month ago that NATO allies were asking themselves where the hell is Germany? As the US and other countries were increasingly worried about the 100,000 Russian soldiers massing along the border with Ukraine, Germany seemed to be moving very slowly if at all. Even within Germany, conservative politicians were worried the country’s new Chancellor, Olaf Scholz, was playing into Putin’s hands.

The United States and its NATO allies are moving to bulk up their military commitments in the Baltics and Eastern Europe as the standoff with Russia over Ukraine deepens.

And then there is Germany. In recent days Germany — Europe’s largest and richest democracy, strategically situated at the crossroads between East and West — has stood out more for what it will not do than for what it is doing…

“Within the European Union Germany is crucial to achieve unity,” said Norbert Röttgen, a senior conservative lawmaker and advocate of a more muscular German foreign policy. “Putin’s goal is to split the Europeans, and then split Europe and the U.S. If the impression prevails that Germany is not fully committed to a strong NATO response, he will have succeeded in paralyzing Europe and dividing the alliance.”

A couple days after that story was published, Germany offered to send Ukraine a consignment of military gear: 5,000 helmets.

Kyiv’s mayor, Vitali Klitschko, dismissed the offer as “a joke” and said it had left him “speechless.”

“The behaviour of the German government leaves me speechless. The defence ministry apparently hasn’t realized that we are confronted with perfectly equipped Russian forces that can start another invasion of Ukraine at any time,” he told the German newspaper Bild on Wednesday.

“What kind of support will Germany send next?” he asked. “Pillows?”

When it came to the Nord Stream 2 pipeline which carries natural gas from Russia to Germany, President Biden seemed more certain the pipeline would be shut down if Russia invaded Ukraine than Chancellor Scholz did. It wasn’t until this week that Germany finally said it would halt the project. And even then it was still in opposition to removing Russia from SWIFT.

Finally today there’s been a breakthrough. Germany is one of the major weapons manufacturers in Europe and today they’ve decided to let some of those weapons flow to Ukraine.

Germany on Saturday reversed a historic policy of never sending weapons to conflict zones, saying the Russian invasion of Ukraine was an epochal moment that imperiled the entire post-World War II order across Europe…

From its own stockpile, the German government will send 1,000 anti-tank weapons and 500 Stinger anti-aircraft defense systems to Ukraine. The government has also authorized the Netherlands to send Ukraine 400 rocket-propelled grenade launchers and told Estonia it ship over send nine howitzers.

“The Russian invasion of Ukraine marks a turning point,” German Chancellor Olaf Scholz said in a statement. “It threatens our entire post-war order. In this situation, it is our duty to do our utmost to support Ukraine in defending itself against Vladimir Putin’s invading army. Germany stands closely by Ukraine’s side.”

It’s about time. Of course it would have been a lot better if Germany had figures this out before columns of Russian tanks were heading across the border but better late than never. Other countries are also sending weapons:

The Netherlands said it will send 200 Stinger anti-aircraft defense systems to Ukraine — often the top-requested type of military aid among Ukrainian soldiers and officials (apart from Western powers sending their own planes and forces to fight with Ukraine). And Belgium announced it would supply Ukraine with 2,000 machine guns and 3,800 tonnes of fuel.

As Allahpundit wrote earlier today, Putin now seems to be in a bit of trouble. He apparently thought his overwhelming force would have settled this in a few days and was surprised by the early opposition. Now his forces can expect to be facing more and better weapons that could bring some balance to this fight. Let’s hope the Germans macht schnell with delivering those weapons while it still matters.