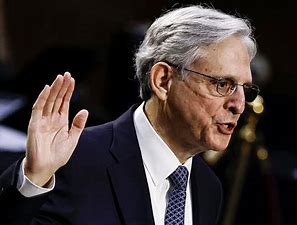 As Ed pointed out this morning, protesting at the homes of Supreme Court Justices isn’t just a bad idea, it’s actually a federal crime. The governors of Virginia and Maryland, where the six targeted justices live, have written a letter to Attorney General Merrick Garland asking him to enforce the law.

Hogan and Youngkin sent the letter to Attorney General Merrick Garland, citing federal statute Title 18, Section 1507 of the U.S. Code, which says it’s illegal with “the intent of influencing any judge” to picket or parade “in or near a building or residence occupied or used by such judge, juror, witness, or court officer.” The governors asked Garland to “enforce the law as it is written.”

“We together ask that the Department of Justice through the respective United States Attorneys’ offices provide appropriate resources to safeguard the Justices and enforce the law as it is written,” the letter said. “It is critical that our Department acts to preserve the safety and standards of the highest court in the land,” the letter said. “There is simply too much at stake.”

Here’s an tweet from Gov. Hogan containing the entire letter:

Today, @GovernorVA and I sent a letter to Attorney General Merrick Garland calling on the Department of Justice to provide adequate resources to keep the Supreme Court justices and their families safe amid ongoing protests at their homes. pic.twitter.com/6D0bMGSp3q

Grassley, R-Iowa, made allegation in a letter to Garland Wednesday. He demanded the Department of Justice (DOJ) enforce a federal law that makes it illegal to “picket or parade” outside a courthouse or a judge’s residence “with the intent of influencing any judge… in the discharge of his duty.”…

“Instead of investigating and prosecuting this illegal activity, the administration has been sadly dismissive of the threats and danger to both the justices and our judicial system writ large,” Grassley also wrote.

“The past week has witnessed the spectacle of coordinated intimidation against Supreme Court Justices,” McConnell wrote in a letter to Attorney General Merrick Garland. “Following the unprecedented leak of a draft opinion in Dobbs v. Jackson Women’s Health Organization, agitators have descended on the homes of Supreme Court Justices in an overt attempt to change course of that pending litigation.”

McConnell said the protests violated federal law, namely Section 1507 of the Criminal Conduct Code, which makes it a crime to “picket or parade …  with the intent of influencing a judge … in the discharge of his duty … in or near a building or residence occupied or used by such judge.”

This afternoon Gov. Younkin went on Neil Cavuto’s show to discuss the letter he sent to AG Garland.

“The statute is incredibly clear,” Youngin told host Neil Cavuto. “It basically says if you are parading or picketing in order to try to influence a judge, it’s punishable with up to a year in prison. That sounds illegal to me.”…

“The state police are at the ready to support local resources and federal resources. We have substantial resources ready to go. Local police, I have asked them to create a perimeter around each of the justices’ homes with support from state police as needed,” Youngkin said.

“And then, we asked Attorney General Garland to enforce the law, and to make sure that these demonstrators are not allowed to try to intimidate justices like they’re trying to do,” he continued.

Cheers and Jeers: Rum and Wear A Mask FRIDAY!