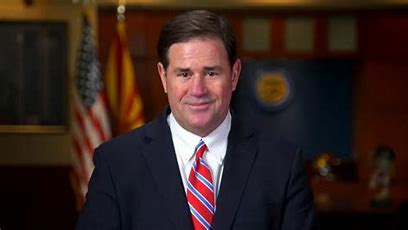 Governor Ducey has had enough. He’s building a makeshift border wall to fill in the gaps left when construction stopped on Trump’s border wall, thanks to Biden’s executive order. There is a 1,000- foot gap in the border wall near Yuma, Arizona. Ducey is moving in shipping containers to close the gap.

Ducey said, ‘We can’t wait any longer. The Biden administration’s lack of urgency on border security is a dereliction of duty.’ He’s right. It looks like he’s taking a page out of Texas Governor Greg Abbott’s book. The Yuma sector of the southern border has seen the biggest spike in apprehensions of illegal migrants of all nine border sectors this year. Like Abbott’s requests of the federal government, Ducey’s requests for support have gone unanswered.

The Yuma sector of the border, 126 miles long, has seen an almost 300 percent increase in ‘border encounters’ – migrants arrested by Customs and Border Protection agents – this year, compared to the same time frame in 2021.

The spike is the highest recorded by any of the nine sectors: two in California, two in Arizona, one in New Mexico and Texas, and four solely in Texas.

Yuma has seen the third highest total number of ‘encounters’ this year – beaten only by Del Rio and the Rio Grande sectors, both in Texas.

Ducey said his state had tried to convince the White House to do more, but was frustrated.

‘For the last two years, Arizona has made every attempt to work with Washington to address the crisis on our border,’ he continued.

‘Time and time again we’ve stepped in to clean up their mess.

‘Arizonans can’t wait any longer for the federal government to deliver on their delayed promises.’

ON THIS DAY ⬇️

One year later, Sec. Mayorkas and his defeatist attitude continue to wreak havoc on our border communities. Arizona will continue to take matters into our own hands. https://t.co/QQMc9gmnUt

Governor Abbott used shipping containers in some sections of the southern border, too. Ducey is going one step further and putting four feet of razor wire on top of the containers. State contractors began moving in 60-foot-long shipping containers, stacking two of the 9-foot-tall containers on top of each other on Friday. The job should be completed in a few days. There are plans to fill in three gaps in the border wall in the coming weeks, totaling 3,000 feet.

Payment for the makeshift wall will come from $335M in state sales tax revenue. Ducey signed House Bill 2317 which dedicates the funds to border security. “Inaction by President Joe Biden has led to the worst border crisis in over 20 years,” Ducey said.

Arizona has had enough. We can’t wait any longer. The Biden administration’s lack of urgency on border security is a dereliction of duty. For the last two years, Arizona has made every attempt to work with Washington to address the crisis on our border.

Our border communities are being used as the entryway to the United States, overwhelming law enforcement, hospitals, nonprofits and residents. It’s our responsibility to protect our citizens and law enforcement from this unprecedented crisis.

Texas taxpayers have been footing much of the bill for border security, too. It’s the federal government’s job to secure our country’s borders and it is ridiculous to expect individual states to try to fund such efforts. Border communities, like Yuma, just can’t do it. The very least that Mayorkas and Biden can do is send additional law enforcement personnel to apprehend migrants and either expel them or send them to Border Patrol to begin processing their claims for asylum, most of whom are not eligible. Cartels and coyotes are not stupid. They shift their drop-off locations of migrants to the most vulnerable areas. Currently, that is the Del Rio and Rio Grande sectors in Texas and the Yuma sector in Arizona. This move by Ducey was prompted by the announcement of the Biden administration that DHS would no longer use the Remain-in-Mexico policy.

Arizona has been sending two to three buses of asylum seekers from Yuma to Washington over the last three months to make a political statement as the number of arriving migrants overwhelmed local resources.

Ducey began the program in May and has said everyone on the bus trips are going voluntarily to the capital with intended final destinations in East Coast cities.

As of August 11, the state of Arizona had sent 1,425 asylum seekers to Washington, according to the governor’s office.

That number of asylum seekers is a drop in the bucket to what border states experience each week in migrant apprehensions. Every state is a border state now. Migrants are not staying in the Rio Grand Valley or in Yuma when they make it across the southern border. They have plans to go to cities across the country, whether it is along the east coast from New York to Florida or the west coast. DHS has been flying and busing them all across America for months and months now and no one heard a peep from the mayors of sanctuary cities.

Biden’s border crisis is deliberate and intentional. No one should be surprised to see desperate governors do what they can to keep their states secure.