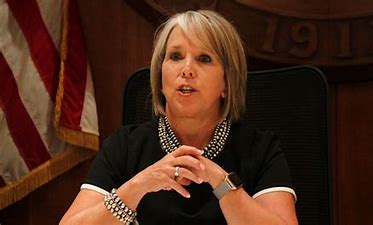 New Mexico Gov. Michelle Lujan Grisham launched an initiative last week that asks state workers and National Guard members to become licensed volunteer substitute K-12 teachers and child care workers. The state is in a dire situation with a teacher shortage. The governor has completed the registration to become licensed as a substitute teacher according to her press secretary.

There is no word yet if Grisham will actually end up in a classroom. Because of the rapid spread of the Omicron variant, the goal is to keep schools open.

Volunteers will have to clear a mandatory background check, complete an online substitute teaching training, and then undergo a typical onboarding process done by the school where they’re placed. The new program speeds up approval of the licensing process to two days. Civil servants and Guard members who are currently involved in critical health care roles or administering vaccines are asked not to participate.

She has no experience in education but she expects to be placed in an elementary school as soon as this week. Grisham said she will donate her time and not receive any payment for it. Her press secretary said any work in schools won’t necessitate the need for the lieutenant governor to step in for the governor. So far, 50 National Guard members and 50 state employees have signed on with the initiative.

It sounds as though the teacher unions are embracing this move and may be expecting to use the pandemic to make gains on their demands as other teacher unions have done in cities like Los Angeles, Chicago, and New York City. Mostly though, there is little else but to embrace any help they can get to fill in the gaps of missing teachers and support workers. Perhaps it is best to leave the complaints about pay for another day.

The president of the state teachers union says the educator shortage in New Mexico is at a crisis level. “There’s a history of low pay. Right now, New Mexico educators make less than the surrounding states,” says Whitney Holland, president of the American Federation of Teachers New Mexico. “I think there’s a workload problem, I think there’s a disrespect problem. You name it, it was the perfect storm – then you add COVID to the mix.”

Holland says while she was skeptical at first, it will help keep schools open. “We are in such a dire crisis right now, if having a pool of substitutes means that our educators can take time off and take time for themselves, then I’m for this idea,” says Holland.

Grisham said that the initiative is not to interrupt work being done in schools, just to keep everything going.

Since winter break, roughly 60 school districts and charter schools in New Mexico were forced to switch to remote-learning due to staff members testing positive for Covid-19 or having to isolate or quarantine under CDC recommendations, according to the governor’s office.

Also due to staffing shortages, 75 child care centers have partially or completely closed since the start of the year, according to the governor’s office.

Santa Fe Public Schools Superintendent Hilario “Larry” Chavez, whose school district has gone remote, said Wednesday that the initiative will be “instrumental” in helping continue or return to in-person learning and reduce “the stress on our remaining staff who have taken on additional duties.”

“This initiative will help create a stable school environment, as well as help parents who are having to juggle childcare and jobs,” MaryBeth Weeks, the head of New Mexico Parent Teacher Association, said in a statement.

State Republicans say this initiative is little more than a political stunt by the governor.

“Given that Lujan Grisham is on her third Education cabinet secretary appointee, it is no wonder that she cannot seem to find a way to keep our schools at full employment. This Governor has single-handedly made a school system that was already struggling, fall even further behind,” Republican state House Minority Leader Jim Townsend said.

Republican state Senate Minority Leader Greg Baca said in a statement: “What New Mexico needs right now is leadership—not political stunts. While we appreciate those willing to step in and teach, let’s call this ‘initiative’ what it really is—a desperate reaction to the crisis created by this governor.”

Other states are facing teacher shortages, too, and some are asking parents to fill in as substitute teachers. Calls for parents to volunteer as substitute teachers have come from school districts in Wisconsin and Texas in the last two weeks. Some parents in California are signing up for long-term assignments. The same is happening in the state of Washington.

Stunt or not, a least the schools are trying to stay open now instead of closing down at every opportunity. Maybe the message has finally gotten through to government bureaucrats, mostly Democrats, that children are not thriving as they are stuck at home and learning remotely. The virus isn’t going away and states will have to find a way to work through it.

The Destruction of the American Nuclear Family