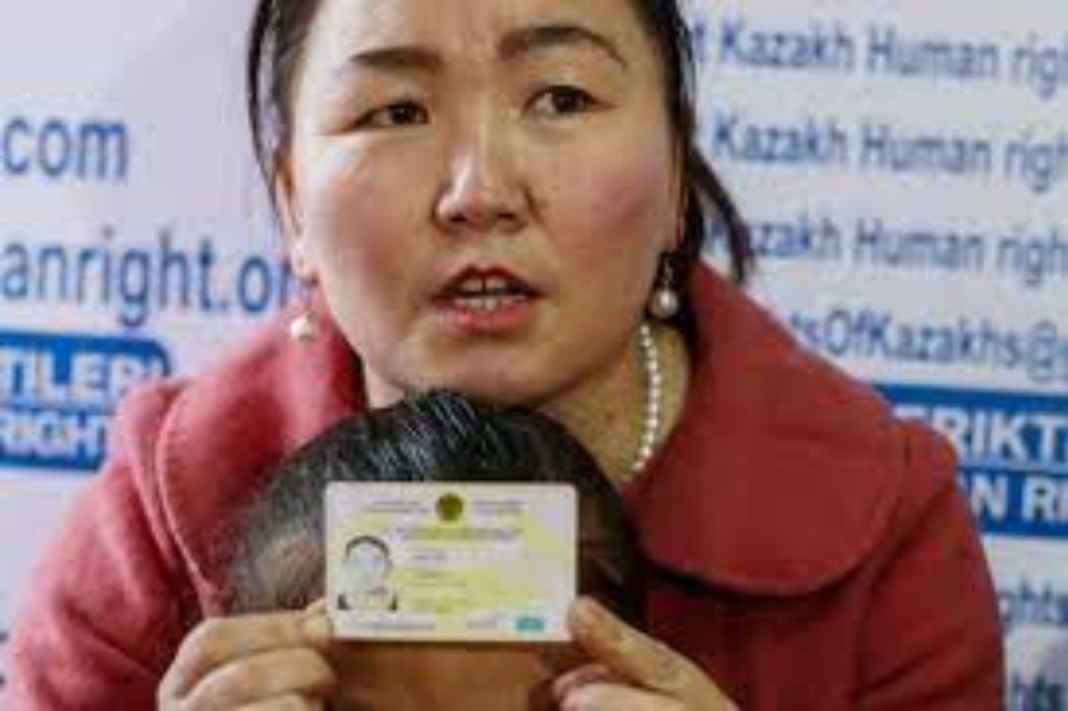 In January, 7-year-old Bayan Auelkhan landed at Dallas Fort Worth International Airport with her parents. She found herself over 7,000 miles away from her home in Kazakhstan, and her family does not know if or when they’ll return.

But she doesn’t mind the travel or even living in a strange, new place, now that Bayan is back with her mother after being separated for much of her life.

Bayan called attention to her plight in a YouTube video posted in 2019 by a Kazkh activist, Serikzhan Bilash. Bayan is seen in the video, alongside her father, pleading to be reunited with her mother.

“I miss my mommy,” she says in the video.

The video shows her and her father begging the Chinese government to release her mother, Gulzira Auelkhan, from what China calls a “vocational” camp, many of which are located throughout the country’s Xinjiang province.

Gulzira Auelkhan and her family are ethnic Kazakh and she is originally from Xinjiang. She went on what she thought would be a round trip from Kazakhstan back to China in 2017, but instead she says she was stopped by Chinese authorities and imprisoned.

“Because you went to Kazakhstan, you were imprisoned because you have a problem with your ideology,” she claims Chinese authorities told her. She said she spent the next 15 months inside one of these “vocational” centers.

Up to 3 million Turkic Muslims are, or have been, detained in facilities like these, according to the U.S. State Department and human rights activists. The Chinese government does not deny the existence of these facilities, but instead says they are part of “anti-terrorism and de-radicalization efforts in Xinjiang in accordance with the law to protect people’s lives.”

Turkic Muslims make up the majority of Xinjiang — 7% are Kazakh, like Gulzira Auelkhan, and another 46% are Uighur. After a rise in violence throughout the region over the last 20 years, Beijing blamed a radicalized group of Uighurs for a series of attacks, which experts say gave China an excuse to target its Turkic Muslim population.

“Locking up 10% of the region’s population is not an appropriate response,” said Sophie Richardson, the China director at Human Rights Watch. “The overwhelming majority of people who have been detained are not in any way alleged to have broken discernible law.”

“They made us [women] take pills,” Gulzira Auelkhan told ABC News. “The guards would stick their fingers in your mouth to make sure you swallowed the pills.”

Gulzira Auelkhan believes these pills were part of a forced sterilization strategy, adding, “It was forbidden to be pregnant.”

ABC News cannot confirm what was in these apparent pills. She, however, is one of several alleged camp survivors who have reported taking unknown medications in these facilities.

The Chinese government denies any forced sterilization occurs in these facilities. However, the government does say it is promoting birth control throughout the region — touting a lower Uighur birthrate in a recent study.

The Chinese Embassy tweeted in January that Uighur women were “no longer baby-making machines,” which received widespread condemnation and was removed from Twitter the same day. The statement citing one of their studies remains published in a newspaper owned by the Chinese Communist Party.

Gulzira Auelkhan’s story is consistent with many other witnesses, including her testimony about torture at the hands of the Chinese government.

After completing her vocational training in the camp, she says she was forced to work in a textile factory. When she attempted to share her location with her husband — who was still in Kazakhstan with their daughter — she says she was caught and beaten by Chinese officials.

She claims she was put in a “tiger chair,” a medieval device used to cause severe pain whenever the occupant attempts to move, even slightly.

“I thought I have died that day,” she told ABC News. “I felt my soul has passed.”

This specific account is very similar to four other alleged camp survivors ABC News interviewed in Kazakhstan in 2019.

Gulzira Auelkhan was eventually released, she says, and made her way to Kazakhstan. Her home country, however, no longer felt safe. Random acts of violence against Uighurs and Kazakhs there began to frighten her — and Bilash was arrested for not registering his activist organization with the Kazkh government.

Gulzira Auelkhan, her husband, young daughter and Bilash now find themselves in Midland, Texas. They are applying for asylum so they can obtain permanent residency.

ABC News and other media outlets have been denied access to Xinjiang numerous times since the start of the coronavirus pandemic. Multiple requests for an interview with Chinese Ambassador to the United States Cui Tiankai have been ignored by the embassy in the United States.

In response to a two-page document with specific questions and allegations, the embassy sent ABC News a link to a report by a newspaper owned by the Chinese Communist Party.

The report states: “People in the region continue to embrace peace and prosperity and Xinjiang society continues to develop steadily. These facts are the most powerful tool to debunk lies on Xinjiang.”