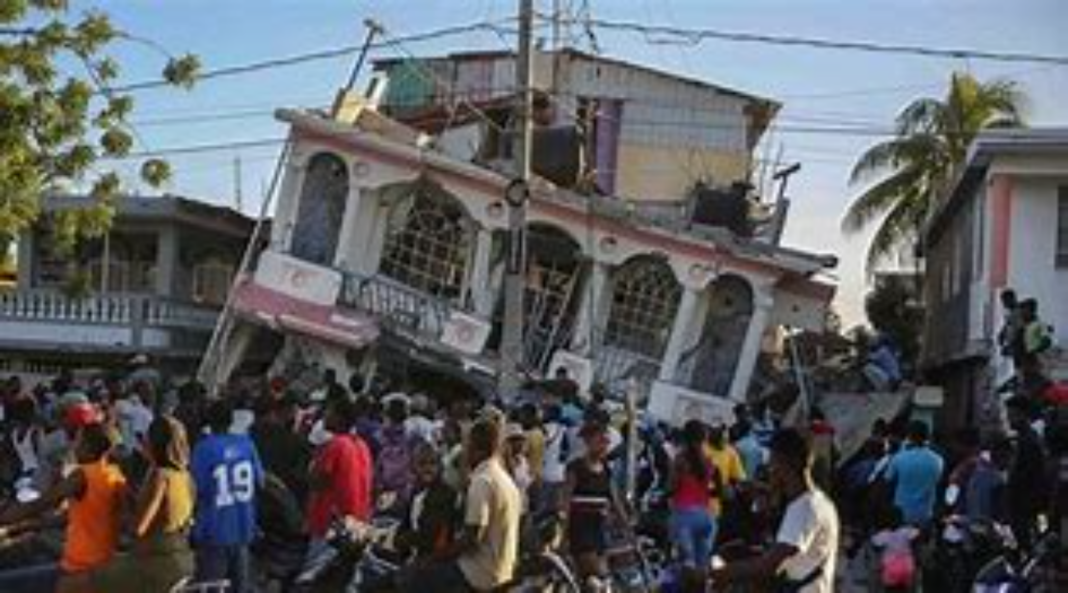 Weeks after a massive earthquake devastated parts of Haiti, aid has yet to reach some of the more remote areas, and the suffering — and death toll — is growing. Here in the U.S, the more than million Haitian Americans with ties to the island often find themselves short on resources to help families and loved ones who need it back home — a familiar feeling for the Haitian diaspora in the U.S still reeling from a 2010 earthquake on the island that killed thousands.

The magnitude 7.2 earthquake that struck Haiti on August 14 killed more than 2,200 people and injured 12,268; some 53,000 homes were also destroyed The images are gut-wrenching, especially for Haitian Americans who are still waiting for word from friends and relatives near Haiti’s southern peninsula, where the quake was centered.

“People have been suffering for a long time since the earthquake. There are no doctors. It took days for my family to find care,” Wesner Jean said, in tears, from his home in New Orleans. “They walked the countryside until they found a clinic set up outside in a tent, and they witnessed a child with his leg being amputated in the open air.”

Jean, whose mother died in the 2010 earthquake,  feels helpless watching the images a childhood friend in Haiti sends to his phone. He’s stuck watching the tragedy unfold 1,300 miles away. One of the videos shows a young girl gasping for air as his friends pluck her from a tiny opening in a pile of rubble. A young boy dazed and covered in dust follows.

Today Jean’s home is in New Orleans, a city whose history and culture are deeply intertwined with Haiti. The end of the Haitian revolution in the early 1800s sparked a mass migration from Haiti to New Orleans that helped shape the city and its trademark Creole culture, doubling the population of New Orleans. Leaders in the Haitian community believe the population in New Orleans might be as large as 6,000 or 7,000, having grown since the massive earthquake in 2010.

At the First Haitian Baptist Church just outside New Orleans, the 135-member congregation knows the connection between heritage and homeland. Several parishioners have family members who have died or were badly injured in both earthquakes. They are mourning again, and only prayers can quiet the helplessness.

“It’s very sad for me. It’s my country. It’s my people,” Pastor Joseph Blanchard told the NewsHour. “They are dead and homeless, very hungry or injured. I worry for them, and I just pray. What little we have, we’ll send to them.”

The moment Missouri resident Estevenson Coleman heard another quake struck in August, he was immediately overwhelmed with flashbacks. “The first thing that came to mind,” he said, “was ‘not again.’”

Coleman was born in Gonaïves, which is about 91 miles north of Haiti’s capital, Port-au-Prince. As a child, he and his sister were partially raised in an orphanage when his extended family could not care for them. When he was 11 years old, they were adopted by a doctor and nurse from the United States and four years later, in 2009, they moved to St. Charles, Missouri, an area right outside of St. Louis County

That move came just two months prior to the 2010 earthquake, but he still remembers seeing the images as a kid.“I was scared to even look,” he said as he reflected on that day.

Coleman is a program manager for Brace For Impact 46, a nonprofit that builds homes in North St. Louis and hospitals, schools, and orphanages in Haiti.

“I still have family there, aunts, uncles, cousins, my grandma and my grandpa on my mom’s side, and my half-siblings,” Coleman said. “I’m still very fluent in creole and I still do pretty well in French as well. I’m up there as much as possible, I’m still very connected.’

When news broke that another quake hit Haiti, Coleman’s organization mobilized immediately. Six people from one of their hospitals in Haiti moved quickly to set up a tent where the earthquake hit and got right to work, Coleman said. Two days later, Hurricane Grace brought approximately two inches of rain to the area, making recovery more complicated.

“They’ve seen about 612 people and they have done surgeries on 13 people but I know that number has ramped up and they were worried about rain coming through,” he said.

Coleman said though his family was not hit hard by the latest earthquake, the storm that followed did pose a threat to where they live.

“With so much rain coming through they almost experienced a small flood because they are not too far from a ravine and then all the water came down the mountains,” he said.

The thought of being thousands of miles away was a difficult realization for him to bear. All he could think about was the people who were still stuck and the fact that excessive rain could make finding them much harder.

“It is unbelievable what is happening in Haiti. It’s impossible to believe such despair and succession of tragedies can be happening to one people.”

“I felt helpless — because there was nothing we could do — and also frustrated at the same time because you feel like every time you take one step forward, you take five backwards,” Coleman said. “It is just frustrating knowing you are trying to make an impact but at the same time your impact is so little compared to the actual need. But you can only do so much.”

For Jean, the feeling of helplessness is like deja vu. Dozens of family members, including his two sisters, aunts, uncles, and cousins remain.

“Everybody was at the flea market buying groceries,”  Jean said, recalling the disaster. Some suffered broken bones. “My sister felt the shaking of the ground. It was like a wave. The ground kept moving. Debris was falling … the whole ground opened.”

They all survived, but are now homeless. Like many survivors still awaiting help, Jean’s family is now sleeping in the street huddled together in homes made out of blankets, broken furniture, and other scraps found in the ruins.

“Now we’re trying to help find them a tent or somewhere to sleep because they’re sleeping in the street. They’re afraid to go inside because the remaining houses are damaged and leaning. There are still aftershocks and even as late as this week there was some shaking,” Jean told the NewsHour.

Haiti’s mountainous southern peninsula is full of small communities only reachable by dirt roads or footpaths. It’s why getting help to Haiti has been slow; especially in areas like the tiny village of Binard near Baraderes. Most of the village’s 300 fragile homes built of concrete blocks and tin are gone.

As Hurricane Grace hit days later, Manel Charles watched his relatives in Binard in real-time on his phone from his New Orleans home. Charles grimaced as he watched the makeshift tents collapse in the torrential downpour while friends and relatives were whaling in pain. This is how his mom and dad must live until help arrives. Charles has started a GoFundMe page to help the village.

“Right now, it’s bad more than ever. Why? Because their house fell down completely. They don’t have shelters. They built tents with big leaves,” Charles said. “They are way in the mountains and no aid is getting to my people. They have nowhere to go. They have no toilets. No tent. Nothing.”

Charles shared another video with the NewsHour that shows relatives and friends in a long procession carrying one of his cousin’s body to the woods for burial. Charles’ said that two of his cousins died, but most of his relatives will likely stay put, hoping the Haitian resilience will lift them out of despair. Even so, Charles’ parents have decided to leave their homeland for New Orleans, like many Haitians before them.

“They don’t have many options. If they stay, they’ll probably just live day by day. Maybe, they will get a little help from family members to help them,” he added. “It might help fix a little of what needs to be fixed, but they’ll have to fix it themselves. If not, they are just staying there to die. The government probably won’t help them.”

Jean Montes, a musician, conductor, and professor at Loyola University in New Orleans, is still in stunned disbelief that tragedy has hit Haiti again.

“It is unbelievable what is happening in Haiti. It’s impossible to believe such despair and succession of tragedies can be happening to one people.”

Montes, who last visited relatives in Haiti in 2019, is worried. After two weeks, he’s still nervously waiting for word from his family who live near the mountainous village of Les Cayes, including his father, brother, sister, and aunt.

“I have a couple of relatives that we have not been able to connect yet who are living in the countryside,” Montes told the NewsHour. “It’s very scary because we still don’t know what happened.”

But for now, the many Haitian-Americans from New Orleans who faced a similar catastrophe in Hurricane Katrina say there is still hope for Haiti.

“The Haitian people, just like New Orleans’ people, are very resilient and they have a way of finding a way to survive,” Montes said. “They will find a way to move forward and do a lot with very little. It is one of the strengths of the people of Haiti.”

Coleman in St. Louis shares the same sentiment — which is why doing whatever he can to help is something he is committed to, and something he is hoping others will do too.

“When people hear of Haiti, those that have been down to Haiti understand the strength and the courage they have and they’re really proud of who they are and to be Haitian,” he said. “I’ve never met a Haitian who is not proud.”

“If you can help somebody, there’s nothing better than helping somebody you may never meet or may never be able to repay you,” he said.

As for his homeland and his people, Coleman said though they are experiencing a lot of pain, he does have some hope.

“When people hear of Haiti, those that have been down to Haiti understand the strength and the courage they have and they’re really proud of who they are and to be Haitian,” he said. “I’ve never met a Haitian who is not proud”

Israel: PM Bennett extends the tenure of Nadav Argaman as the...