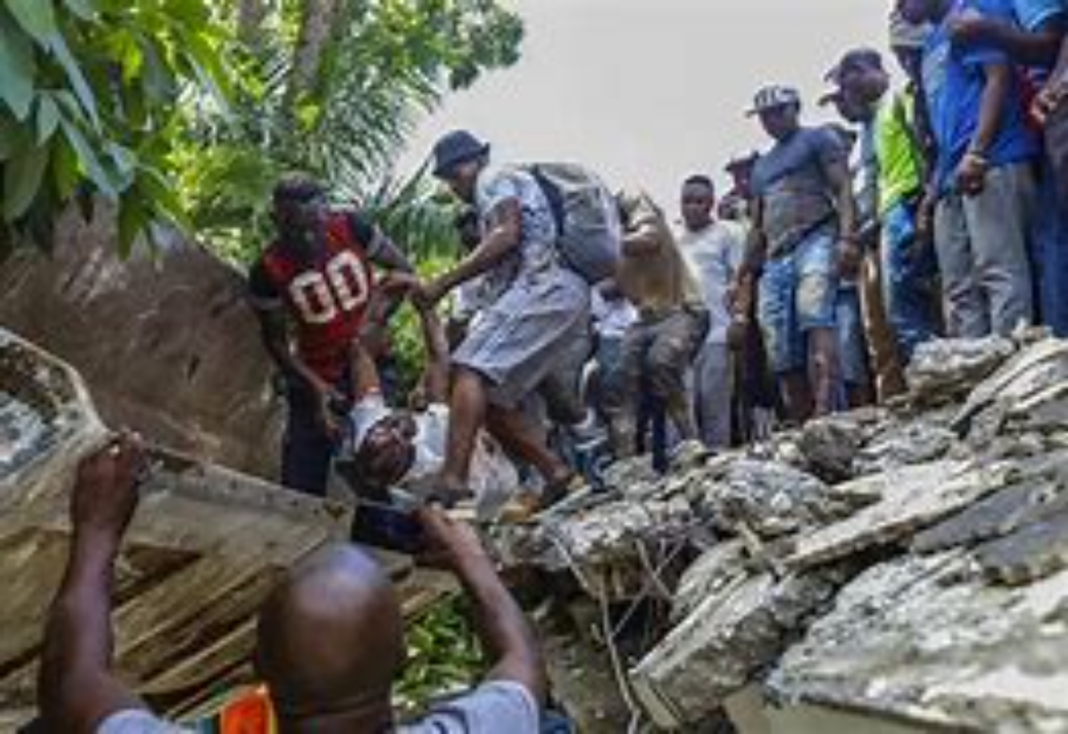 Humanitarian aid is flowing into Haiti following Saturday’s 7.2-magnitude earthquake there and a death toll that has reached 1,297. However, the Caribbean nation’s political unrest, as well as an approaching tropical storm, is complicating efforts.

Nonprofit groups and philanthropy experts say the assassination of Haitian President Jovenel Moise, as well as accusations that money raised following the 2010 earthquake in Haiti never reached those in need, will make fundraising for the nation even tougher.

Art delaCruz, CEO of Team Rubicon, a nonprofit that deploys emergency response teams to work with first responders in disaster areas, said the first briefing his teams in Haiti and the Dominican Republic had with support teams in the United States was about security.

“The assassination of the president, the almost gang-like existence there, it really increases the risk to organizations like ours that deploy into this situation,” delaCruz said. However, Team Rubicon, which was founded in 2010 by Marines Jake Wood and William McNulty in response to the 2010 earthquake in Haiti, has experience on the ground in the country and in similar situations around the world.

“It’s dicey for everyone because the information is incomplete and the situation is dynamic,” delaCruz said. “One way we have a competitive advantage on this is we are an organization where 70 percent of the volunteers are veterans. They have seen this kind of an environment.”

Skyler Badenoch, CEO of the Florida nonprofit Hope for Haiti, says the response has also been complicated because its staff has been directly affected by the disaster. The organization is now gearing up to distribute $60 million worth of first aid supplies and medical equipment to help those affected, he said.

Aid to Haiti has been probed for years and scrutiny intensified in 2015 when an investigation from ProPublica and NPR questioned where $500 million raised by the American Red Cross was spent.

The American Red Cross said in an emailed statement that it is not seeking donations for Haiti relief at this time, but will work with its partners – including the Haitian Red Cross and the Red Crescent – to respond to the earthquake. “We will provide support to help meet the needs of families impacted by the quake, as we have done in the past,” the statement said.

It also disputed the ProPublica/NPR findings. “Contrary to accusations, the American Red Cross has made a significant impact in Haiti, including investment in more than 50 hospitals and clinics, safer housing for more than 22,000 families, funding for the country’s first wastewater treatment plant, support for Haiti’s first-ever cholera vaccination campaign and so much more,” it said in a statement. “Americans donated generously in the aftermath of the 2010 Haiti earthquake to save lives — which is exactly what their donations did. In fact, we spent nearly one-third of donations on helping to keep people alive in the first six months alone.”

Despite the criticisms the Red Cross has received, Maryam Zarnegar Deloffre, an expert in humanitarian aid and professor at George Washington University, believes donors will continue to rely on the organization because of its reputation.

“It has been resilient,” she said, partly because the organization is easily recognized by donors for its work with blood drives, and other things.

This time around, Marleine Bastien, the executive director of the Family Action Network Movement, a social service organization based in the “Little Haiti” neighborhood in Florida, says her organization will devise a plan to hold accountable every group that’s collecting donations for Haiti.

“We definitely do not want another film titled ‘Where Did The Money Go’?” Bastien said, in reference to the 2012 documentary that looked at donations given to Haiti relief following the 2010 earthquake.

The deadly earthquake hit Haiti at the same time a growing humanitarian crisis is unfolding in Ethiopia, and instability is rocking Afghanistan. Deloffre, of George Washington University, believes fundraising prospects for the country are bleak.

“I unfortunately do not expect broad global attention to the earthquake in Haiti,” she said. “Or public giving, on the same scale as we saw in response to the 2010 earthquake.”

Past allegations of misspent donations have created some hesitancy as well, said Badenoch, of Hope for Haiti, though the need following the most recent earthquake may be even more intense.

“It is quite possible that Haiti is going to need more help than ever before,” Akim Kikonda, Catholic Relief Services’ country representative in Haiti.

“The area was slowly recovering from the devastation caused by Hurricane Matthew in 2016 but drought and two recent tropical storms have largely destroyed the little livelihoods people had been able to restore,” Kikonda said. “After Saturday’s earthquake, it is only going to get worse.”