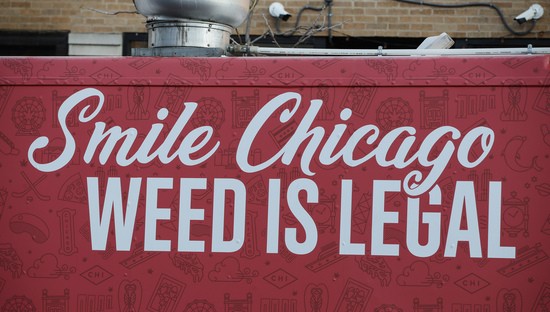 A record percentage of U.S. voters say marijuana should be legalized, according to a poll released Thursday.

The Quinnipiac University Poll recorded its highest percentage ever, 70%, in support of legal weed, with 24% in opposition.

When the survey first asked the question in December 2012, 51% of registered voters answered yes and 44% answered no.

“This is not entirely surprising,” Quinnipiac Polling Analyst Tim Malloy said. “The whole country is trending this way.”

I’ve always thought anti-cannabis laws were kind of stupid, and since moving to the West Coast, where weed is plentiful and legal, that opinion has only been cemented. Six years ago I moved from Wisconsin, where you’re allowed to claim your local Molson Coors distributor as a dependent on your taxes, and it never ceases to amaze me how the same people who excoriate the evil marijuana leaf are just fine with getting stumbling drunk during deer hunting season, turning half the state into a bizarre, blaze-orange Mardi Gras … with guns.

By almost any measure, cannabis is less dangerous than alcohol. And now Americans have enough experience with it to see through the propaganda, deliberate lies, and rank bullshit.

And now that we’re far enough removed from the reefer madness of the 1950s and the “Just Say No” nonsense of the 1980s, even many of our elected officials are starting to see reality.

Even Senate Majority Leader Chuck Schumer, whom I’d never expect to see at Burning Man (partly because he wouldn’t attend, and partly because I’m usually too high to leave my house), is hoping to see cannabis use at the very least decriminalized nationwide in the near future.

“Hopefully, the next time this unofficial holiday, 4/20, rolls around, our country will have made progress in addressing the massive overcriminalization of marijuana in a meaningful and comprehensive way,” Schumer said on the floor of the upper chamber.

Schumer said the nation’s war on drugs has “too often been a war on people, particularly people of color.”

“I believe the time has come to end the federal prohibition on marijuana in this country, and I’m working with Sens. [Cory] Booker and [Ron] Wyden on legislation to do just that,” he said.

Of course, Republicans don’t want to listen to their constituents when it comes to infrastructure or stimulus spending, which is why they dove headlong into the Mr. Potato Head controversy instead of supporting the millions of nontuberous Americans. So why would they listen now?

Also, as much as I love the guy, Joe Biden isn’t exactly a pro-legalization warrior. (I’d invite him to smoke with me, but I’m not sure it would be as fun as toking up with, say, Kamala.) So this is all still an uphill battle.

But you can help. Check these resources for ways to push legalization forward:

7 Things You Can Do To Help Legalize Marijuana (High Times)

And in case you want to nudge President Biden in the right direction (assuming he won’t accept your invitation for a Sensimilla Summit), you can “Tell President Biden: Follow through on your commitment to expunge marijuana records.” As we enjoy our freedoms this 4/20, we should all be embarrassed that people in this country are still suffering greatly for their nonviolent cannabis-related “crimes.”

So celebrate (responsibly, of course), but don’t forget that there’s still plenty of bullshit left for us to triumph over.

”This guy is a natural. Sometimes I laugh so hard I cry.” — Bette Midler on author Aldous J. Pennyfarthing via Twitter. Need a thorough Trump cleanse? Thanks to Goodbye, Asshat: 101 Farewell Letters to Donald Trump, Dear F*cking Lunatic, Dear Pr*sident A**clown and Dear F*cking Moron, you can purge the Trump years from your soul sans the existential dread. Only laughs from here on out. Click those links, yo!