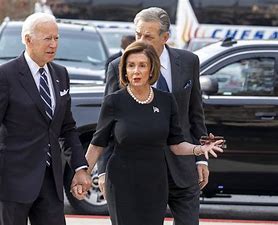 Democrats have repeatedly pushed policies that lead to higher fossil fuel prices while advocating for a green transition away from such traditional sources of energy.

“We are going to get rid of fossil fuels,” President Joe Biden said in February 2020 while campaigning in New Hampshire.

Since taking office, Biden has repeatedly implemented policies that industry groups and Republican lawmakers have argued drive the price of energy up. The president has outlined plans to make the U.S. power grid carbon-free by 2035 and the entire economy net-zero by 2050.

Mere days after taking office in 2021, President Joe Biden signed an executive order pausing new oil and gas leases on federal lands and waters as part of his climate agenda.

While a federal judge ordered the administration to halt the attempted ban in June, the Department of the Interior has dragged its feet and defied multiple court-ordered deadlines to restart the program. The Interior Department also chose not to appeal a recent ruling that prohibited an offshore drilling lease in the Gulf of Mexico the agency facilitated in the fall.

The administration also quietly implied in its FY23 budget that it was not planning to hold any offshore oil and gas lease sales until at least October 2023. The U.S., which consumes about 20 million barrels of oil per day, produced about 9.5 million barrels of oil per day at onshore sites and another 1.7 million at offshore sites mainly located in the Gulf of Mexico in 2021, according to federal data.

“The consequences are significant when it comes to investment, energy production, jobs and government revenues,” National Ocean Industries Association Erik Milito told the Daily Caller News Foundation in late March after the budget was released.

In addition to delaying the federal oil and gas leasing program, the Biden administration recently proposed a series of tax hikes on the fossil fuel industry. The proposal, also included in the FY23 budget, would raise taxes on the industry by an estimated $45.2 billion between 2023-2032.

“These oil, gas, and coal tax preferences distort markets by encouraging more investment in the fossil fuel sector than would occur under a neutral system,” the Biden administration wrote in its budget explanation.

“This market distortion is detrimental to long-term energy security and is also inconsistent with the Administration’s policy of supporting a clean energy economy, reducing our reliance on oil, and reducing greenhouse gas emissions,” the department added.

On the day of his inauguration, Biden revoked the Keystone XL pipeline’s federal permit which would have transported nearly 900,000 barrels of crude oil into the U.S. from Canada every day. The president wrote that the U.S. must “prioritize the development of a clean energy economy” in the executive order.

The administration also abandoned the Willow Project, a significant oil and gas project in Alaska approved by the Trump administration that would have produced 100,000 barrels of oil per day.

Prices at the pump increased a whopping 48.4% between Biden’s January 2021 inauguration and Feb. 21, three days before Putin ordered the invasion, according to the EIA. By comparison, gas prices have increased from $3.53 per gallon to $4.07 per gallon, a 15.3% hike, since the Ukraine crisis began.

‘We shouldn’t be relying on fossil fuels’

Further, the Democratic-majority Securities and Exchange Commission, the chair of which Biden appointed, proposed a sweeping set of rules in March that would require publicly-traded companies to disclose their carbon emissions and how they were planning to transition away from fossil fuel reliance. Critics said the move was outside of the financial regulator’s congressional mandate and would lead to higher energy prices.

One analysis determined that the Green New Deal’s proposal to decarbonize the power sector would cost U.S. households about $2,546 per year. Green New Deal provisions would cost the U.S. an estimated $94 trillion over the next 10 years, according to the American Enterprise Institute.

Ocasio-Cortez recently reiterated the importance of transitioning to renewable energy, arguing that oil markets were unstable and unreliable.

“When we talk about releasing strategic reserves, these are short-term solutions in order to prevent price shocks,” Ocasio-Cortez said in a March interview with MSNBC. “We shouldn’t be relying on fossil fuels to begin with.”

In the run-up to the 2020 presidential election, ten Democratic candidates said they backed a ban on fracking, the method of fossil fuel extraction that has led to a boom in domestic natural gas production over the last decade. Fracking has also enabled the U.S. to have significantly lower energy prices compared to Europe amid the Ukraine crisis, according to the left-leaning think tank Brookings Institution.

“I favor a ban on new fracking and a rapid end to existing fracking so that we can build a 100 percent clean energy society as soon as possible,” Pete Buttigieg, the former candidate and current secretary of transportation, said in June 2019.

Democratic Washington Gov. Jay Inslee, another former presidential candidate who supported a fracking ban, has also pushed for a national carbon tax. On the campaign trail, Inslee proposed a “fee” on carbon dioxide emissions, which would lead to higher prices in an attempt to force a green transition.

‘Clean energy is the future’

Democrats, though, have turned around and argued that higher energy prices prove the immediate need for clean energy alternatives like electric vehicles, solar, wind and industrial battery storage.

“Our view is that the rise in gas prices over the long term makes an even stronger case for doubling down our investment and our focus on clean energy options,” White House press secretary Jen Psaki said in November amid rising gasoline prices.

“The free world has short term fuel and energy needs and for now that means finding non Russian oil and gas,” Democratic Hawaii Sen. Brian Schatz, who has been dubbed a “climate hawk,” tweeted on March 5. “But let’s be clear – the way to leave all of these thugs in the dust is to just, collectively, globally, say, enough already. Clean energy is the future.”

“The only viable path to energy independence for the American economy is to reduce the energy intensity of our economy overall and ultimately to reduce it to zero and to get ourselves to a position where we are no longer reliant on fossil fuels,” National Economic Council Director Brian Deese told Bloomberg.

Economy: Europe′s migrants are part of the solution