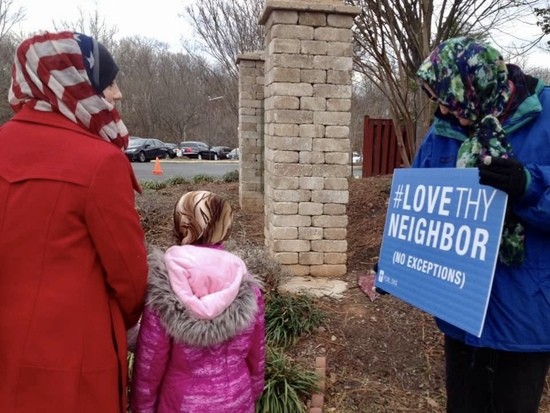 Since it was very cold and we both wanted to get back to our warm places, I fumbled with something quick to say. “It’s Ash Wednesday,” I said. But that didn’t get very far. “I’m Catholic … it’s a religious thing.”

I don’t know what that conveyed to him, but that was as far as we got.

Less than a year later, I moved to D.C. to complete my theological training. I began my studies on September 11th. I stopped wearing my keffiyeh not long after when I rode the metro. During my studies, which included interfaith dialogue, I’ve gone back to that moment more than once.

I realize now, the simpler explanation could have been: “I am a sinner entering Lent.”

So here we are in 2021. Ash Wednesday this year falls after the 57-43 vote on Former 45’s second impeachment for the January 6 insurrection (our own self-inflicted 9/11). It also comes after Valentine’s Day/Parkland Anniversary and the Super Bowl amid Black History Month to remind us of all the things we can cram into the shortest month. And like everything in 2021, the calendar cycles through a lens of how it’s not 2020, but we’re still not past its shadow either.

I don’t know whether mainstream media will make a big deal of Ash Wednesday with our second Catholic president. I suspect he might go to mass and would most likely have ashes imposed (perhaps placed on his forehead, perhaps sprinkled).

The scripture readings for the day are a bit ironic. They talk about how to not make a show of yourself. For example, if you are fasting, you should still clean yourself up and go about your day. After all, what you are doing isn’t for others to see, but for God to see. At the same time, there is a collective call for a public gathering and display so that everyone in the community understands and commits themselves to this period of reflection and preparation in advance of Easter.

I will leave it to priests’ homilies and secular pundits to apply these things to our everyday lives. I have a habit of wanting to experience things anew, not simply to repeat them. While I enjoy rituals and traditions, I am much more interested in change and transformation. Lent always begins with Ash Wednesday. It’s always 40 days. It always involves fasting, abstinence, and works of charity. It always culminates in Easter and Jesus’ resurrection.

In short, as I used to say when I taught such things in parish ministry, HE always rises. Good for Him. The question is, what happened to us? How have we changed? How do I have a better answer for the stranger who was less concerned about me paying for gas and wanted instead to know more about me and why I was there?

The simplest thing I can say in 2021 is this. “Remember you are dust, and to dust, you shall return.” This is often what is said as the ashes are traced on foreheads in the sign of the cross. After 2020, mortality stares us in the face globally in a remarkable way. It’s the great equalizer. The baseline from which the human spirit arises in solidarity and acknowledgment of our inherent dignity. (Notions of pro-life don’t quite capture that.)

The other thing we Christians try to remember is that someone died for us and that calls us to change our lives radically. I don’t expect non-Christians or secular people to come to that exact same conclusion. But I think we can all look at 2020 or our lives before and acknowledge that sacrifices have been made and that people have died before us. And we owe them something. We need to do something to honor that debt and pay it forward.

The list could and does go on. We all know loss of one kind or another. We all find hope somewhere that this is not the end for us. We have to be prepared. We have to get ready. Are 40 days enough? Are Biden’s first 100? Be resolved, we know what it has cost.

Somebody died for you. Make your life count for them.

I spent time with many Muslims in Atlanta aside from that gas attendant. Hassan was the chief of security at the museum where we both worked. He was a high-level engineer from Iraq, but this was the only job he could get in the states, perhaps because of his background as a soldier. I remember calling him from near the World Trade Center just moments after we first started bombing his country.

“It’s OK,” he said. “He’s a madman.” I also remember his last words to me before I left the area. “When I look at you, I see your keffiyeh and say to myself: There is my friend…”

Orlando Rolón: Many Afghan Refugees have passed through a Vetting Process

Airlines are struggling to deal with Fat passengers

Jan. 6 Riot:House Votes to Hold Steve Bannon in Contempt of...