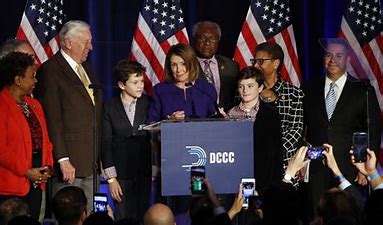 The House passed the America COMPETES Act, the industrial-policy and China-competition legislation pushed by House Democratic leadership and the Biden administration, on a near party-line vote this afternoon.

One aspect of this debate, however, is revealing because it suggests there is no interest among Democratic lawmakers to tackle China’s malign political influence in the U.S.

For months, Democrats have blocked legislation that would ultimately result in sanctions on the Chinese Communist Party’s United Work Front Department. That’s the massive party bureau tasked with coopting religious and ethnic minorities, businesspeople, the global Chinese diaspora, and foreign elites to support the party’s aims. And until recently, its activities flew under the radar.

Sanctioning the UFWD — and the individuals and organizations associated with it — has become a cause célèbre among a certain set of smart conservative China hawks. To do so would be to simultaneously go after the party’s foreign-influence operations and human-rights abuses. The current GOP proposals for sanctioning the united front all involve a similar mechanism: requiring the executive branch to come up with a report detailing the United Front-linked individuals and entities currently involved in sanctionable activity.

Otherwise put, there’s no need to come up with a new sanctions authority, as there’s a very strong chance that UFWD is involved in acts that can be sanctioned under the Global Magnitsky Act, the Uyghur Human Rights Policy Act, and other laws. All Washington needs to do is make the issue a priority. Late into the Trump administration, in December 2020, the State Department imposed some visa restrictions on a few UFWD officials, but there’s still a lot more to do.

That’s why three GOP lawmakers introduced amendments to COMPETES. Two of these, put forth by Representatives John Curtis and Jim Banks, were essentially identical, with both calling for sanctions on the UFWD as a whole. The third, by Representative Burgess Owens, would have applied only to its religious work bureau — an entity involved in the bureau’s repression of religious minorities. Last year, for instance, Radio Free Asia reported on UFWD-operated secret prisons in which Christians are detained and brainwashed.

On Wednesday night, the House Rules Committee issued a list of amendments that would be considered “in order” for debate on the House floor. The Burgess amendment was included, but the Banks and Curtis provisions were not. This suggests that Democratic leadership was comfortable debating a provision to sanction the United Front entity involved in repression of religious minorities but not comfortable debating a proposal to go after the United Front as a whole.

A Republican staffer told me his theory as to why Democratic members would entertain debate on the narrower approach but not the broader one.

“They think sanctioning the whole thing would be super crazy and affect a lot. And it’s true that it would be significant and do a lot more to counter China. If they just do part, it makes them look tough and they avoid that.”

In the end, even the Owens amendment was voted down, as part of a broader package of GOP-offered changes to the legislation.

The COMPETES Act now heads to a conference process with the Senate, which passed its version of the legislation — called the U.S. Innovation and Competition Act — last year.

The House bill includes semiconductor-chip production subsidies (also a focus of USICA), grants for solar-panel construction and the U.N.’s Green Climate Fund, as well as legislation on U.S.–China trade, coral reefs, and diversity within the National Science Foundation. There’s plenty there for conservatives to find objectionable — but there are some bright spots as well, such as legislation expediting refugee processing for Hong Kongers and Uyghurs and a bipartisan proposal to impose stricter regulations on Chinese companies listed on U.S. stock exchanges.

Expect progressive lawmakers to mount a campaign against aspects of USICA, which had considerably more Republican support and is generally a more palatable bill for conservatives (though many House conservatives still oppose it). Among other things, progressive lawmakers, such as Representative Sara Jacobs, have, as I reported this week, already declared that they oppose provisions that counter malign Chinese Communist Party influence of the sort that the United Front works to strengthen.