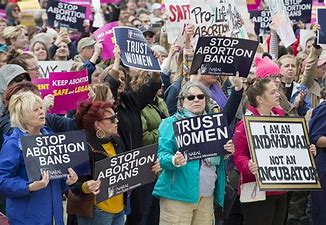 In December I predicted that the traditional conservative rationale for overturning Roe, that the 50 states rather than the Court are the proper venue for regulating abortion, would expire five minutes after the Dobbs decision dropped. At which point it would shift instantly to “national restrictions!”

I was wrong. It took about two hours after the ruling for that decades-old federalist credo to be dumped in a ditch by House Republicans.

Here’s something I rarely say about these chuckleheads, though. The idea of a national 15-week ban is … good politics.

But Banks says one of the very 1st bills on the floor in a GOP-led House would be “Born-Alive Abortions Survivors Protection Act.” https://t.co/irhXfZU1jx

Fifteen-week bans are a sweet spot of sorts legislatively. Pro-choicers bristle at six-week bans because at that point many women don’t know that they’re pregnant yet. Pro-lifers bristle at bans that don’t kick in until viability. The 15-week ban tries to satisfy both sides to a degree, and polls reasonably well as a result — uh, depending which poll you’re looking at. A Fox News poll taken last month found voters split 54/41 on 15-week bans passed at the state level. A month earlier the WSJ had it at 48/43. Other surveys have been less encouraging, though, with Pew finding a 25/41 divide on banning abortion after 14 weeks (another 22 percent said “it depends”) and ABC seeing 57 percent opposed to a ban after 15 weeks.

If Fox’s numbers are accurate, a 15-week national ban could be a solid wedge issue for Republicans. Obviously the bill won’t pass since Biden will enjoy veto power until 2025, but passing it isn’t the point. The point is to be able to say “We’re offering you a sensible compromise, Mr. President,” and then watch Biden freak out and insist on abortion on demand throughout the entire nine-month term of pregnancy. It’s rare in modern times for the GOP to stake out a moderate position and dare Dems to make themselves look like extremists by immediately ruling it out, but abortion is an issue that cries out for that strategy. Democrats really are extremists about it. All McCarthy and his caucus would be doing would be giving them an opportunity to show it.

But there’s a catch. What if, er, Fox’s poll isn’t accurate and the ABC one is? Even if Fox’s poll is accurate, will voters react the same way to a one-size-fits-all national ban imposed by Congress as they would to a 15-week ban imposed by an individual state government?

And what about social conservatives, who’ll be left to wonder why their newly elected House Republican majority is being so timid in pushing to restrict abortion nationally? According to the CDC, 92.7 percent of abortions are performed in the first trimester, all of which would remain legal (in blue states, at least) under the legislation McCarthy is considering. Republican voters didn’t spend 50 years working to overturn Roe for the sake of eliminating less than eight percent of abortions.

Although it would be more than that in practice, of course. Once red states ban abortion entirely, forcing local pregnant women to find providers out of state, demand will quickly overwhelm supply and create long waits that will lead to women getting abortions later in their pregnancies. A 15-week national ban would prevent those abortions — but as I say, that won’t pass until 2025 at the soonest. In the short term, the perverse outcome of today’s decision is likely to mean more abortions getting pushed off into the second and even third trimesters, when babies are viable.

Still, 15-week bans may be irresistible to moderate Republicans who are searching for compromise, or at least eager to signal that they are. News today from Virginia:

Virginia Gov. Glenn Youngkin (R) said he will seek to ban most abortions after 15 weeks of pregnancy, moving quickly following the U.S. Supreme Court’s decision Friday overturning the constitutional right to an abortion…

“Virginians do want fewer abortions as opposed to more abortions,” Youngkin said Friday morning during a meeting with reporters, editors and editorial writers at The Washington Post, moments after the court’s decision overturning Roe v. Wade was announced. “I am not someone who is going to jump in and try to push us apart … There is a place we can come together.”…

Though he emphasized his personal opposition to abortion, Youngkin said he recognized that there is a spectrum of beliefs in Virginia and acknowledged that 20 weeks could wind up being a point of compromise. “I also represent all Virginians,” he said. But, he added, “I believe the place we should be able to get to is a 15-week pain threshold.”

Electoral realities will make this issue fraught for GOP governors with presidential ambitions. If you’re working with a state legislature controlled by Republicans, you’ll have no excuse in a future for not primary for not having sought a total ban in your state. (“He doesn’t fight!”) But Youngkin does have an excuse: The Virginia state senate is controlled by Democrats. A total ban is a nonstarter there. Which, conveniently, frees him from feeling obliged to push for a total ban in a state Biden won by 10 points.

Although if he ends up on a presidential debate stage in 2024 or 2028, I’m sure some of his colleagues will give him an earful about it.

Speaking of which, the governor of a state that already has a newly passed 15-week ban on the books is now promising to “expand pro-life protections” after today’s decision:

By properly interpreting the Constitution, the Supreme Court has answered the prayers of millions upon millions of Americans. pic.twitter.com/CsPFpNnUPk

Tricky business for DeSantis. A total ban on abortion would be a supreme “own the libs” moment, and you know how he loves those. But a total ban is not where the electorate of a state as purple and cosmopolitan as Florida is, I’m guessing. Which makes a ban risky for DeSantis when he’s four months away from being on the ballot.

Here’s McCarthy at today’s press conference, not committing firmly to anything.

McCarthy suggests he’s open to some sort of national abortion ban, saying “we will continue to look wherever we can go to save as many lives as possible.” pic.twitter.com/pKxNIAeb3B