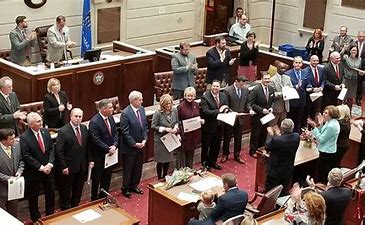 As discussions intensify across the nation on voter fraud and election integrity, many Americans want to know that their voices are being heard accurately at the ballot box.

In Oklahoma, one state senator is taking steps to ensure that his state is on the front line when it comes to safe and secure elections.

State Sen. Warren Hamilton, a Republican, introduced legislation, SB 1570, to overhaul the way his state handles absentee ballots. Hamilton, 51, is a retired Army major and ranch owner from the small town of McCurtain who was elected in 2020.

In a phone interview last month, Hamilton told The Daily Signal that his goal is to make voting by absentee ballot more secure and to avoid what he views as excuses for not voting in person.

“When you start getting into excuses as to why a person can’t be there, well, those are as many as the stars in the sky, so you kind of run into some real problems when you’re looking to enforce that,” Hamilton said.

Current Oklahoma law states: “Any registered voter in Oklahoma may vote by absentee ballot. It is not necessary to give a reason, although some voters may qualify for special conditions.”

“You would only get an absentee ballot if you’re not going to be in your jurisdiction on voting day,” Hamilton said, adding, “We’re asking for a watermark or a bar code on each of these ballots … that’s unique to that particular ballot.”

The Heritage Foundation, parent organization of The Daily Signal, long has held that voting by absentee ballot should be under strict standards and that voting in person is more secure and transparent.

“In-person voting occurs under the supervision of election officials, with election observers there to make sure everything is on the up-and-up,” Hans von Spakovsky, a senior legal fellow at Heritage and manager of the think tank’s Election Law Reform Initiative, argued in a July 2020 commentary.

“This transparency is a vital hallmark of the democratic process,” von Spakovsky wrote. “Mail-in ballots, however, are susceptible to being stolen, altered, forged, and forced.”

Oklahoma has experienced some suspected instances of voter fraud with absentee ballots.

According to Heritage’s Election Fraud Database, in 2015 Ronald Henry, a candidate for the trustees board in Luther, Oklahoma, attempted to have several absentee ballots notarized by Mayor Cecilia Taft.

Local news outlets reported that an anonymous tipster said absentee ballots were being notarized without the voter present. To prevent fraud, Oklahoma law requires that the person who signs a ballot must be present for notarization.

Safe and secure elections, Hamilton said, “are absolutely vital to the preservation of our republic.”

“We just want to be fair,” he said. “We don’t want ballot-box stuffing going on, especially through mail-in voting and stuff like that.”

Are Democrats going to save Liz Cheney’s House seat?