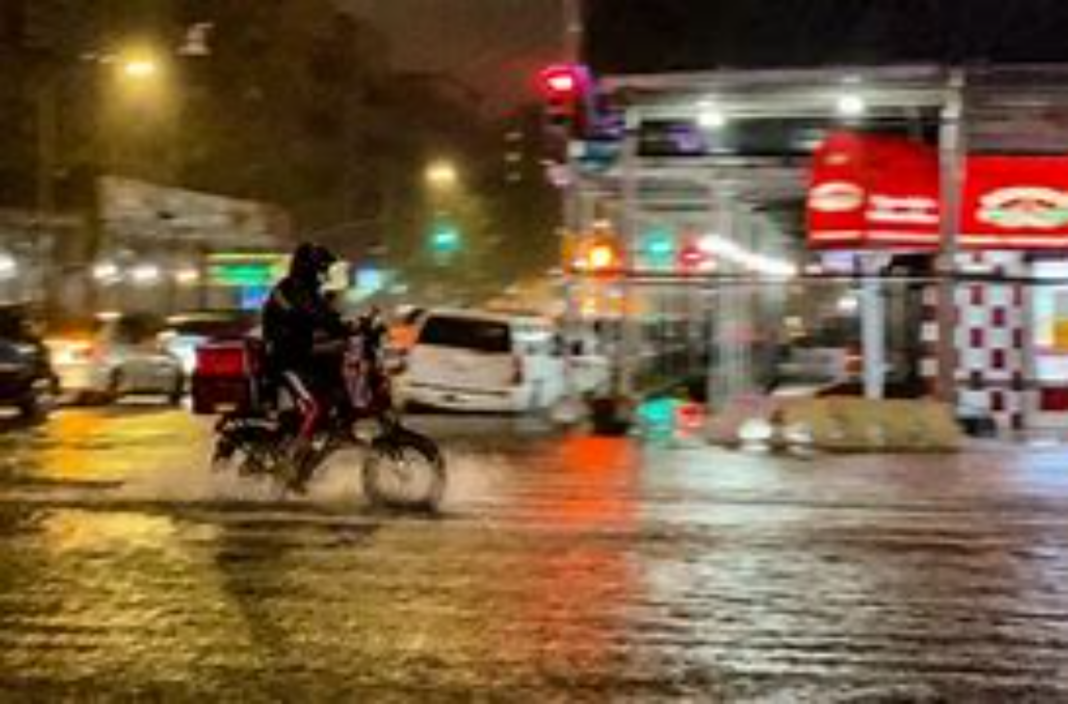 The remnants of Hurricane Ida dumped flooding rain, spawned tornadoes across the Northeast and caused dozens of deaths in areas where the storm landed.

Here are the key developments:

So far in the Northeast, at least 29 deaths have been attributed to the storm. Overall, there’s been at least 40 deaths across eight states related to Ida.

A flash flood emergency was declared for the first time in New York City as subway stations were turned into waterfalls and Midtown streets became rivers. New York City also declared a state of emergency.

“We saw a horrifying storm last night. Unlike anything we’ve seen before,” De Blasio said. “Unfortunately the price paid by some New Yorkers, was horrible and tragic.”

“People were trapped in the subways. But the heroic men and women of the New York Fire Department rescued all of them. They were trapped,” Biden said.

He said he’s made it clear to East Coast governors that the Federal Emergency Management Agency is “on the ground” and ready to provide assistance.

Gov. Kathy Hochul said during a Thursday morning briefing that the “Metro-North, LIRR and the New York City subway system are not fully functioning” and her focus will be on flood prevention.

“Before we worried about coastal areas, now it’s about what’s happening in the streets, the drainage systems that need to be enhanced,” Hochul said. “Because of climate change, unfortunately, this is something we’re going to have to deal with with great regularity.”

She said more than 100 people were rescued in Rockland and Westchester county alone.

NYPD Commissioner Dermot Shea said 8 of the 9 deaths took place in residential homes in basements. A sentiment echoed by New York officials in the briefing was improving flooding resilience in the city.

Four residents of the Oakwood Plaza apartment complex in Elizabeth, New Jersey, were found dead in the aftermath of the flooding, Mayor Chris Bollwage said in a press conference Thursday morning.

The victims included a 72-year-old wife, a 71-year-old husband, a 38-year-old son and a 33-year-old female who was their neighbor, officials said.

Rescuers have been checking the rent roll and going door-to-door though the entire complex to make sure no other bodies are found, a spokesperson for the Mayor told ABC News. The complex is across from the Elizabeth Fire Department headquarters, which was inundated with 8 feet of water.

At least one person also died due to the flooding in Passaic, New Jersey, Mayor Hector Carlos Lora confirmed on Facebook Thursday morning.

Also in New Jersey, three other deaths were confirmed. Two from flooding in two separate incidents in Hillsborough and one person was found dead in a heavily damaged pick-up truck discovered in daylight in Milford, local New York ABC station WABC reported.

Early Thursday in Queens, the New York Police Department said that after responding to a flooding condition at a partially collapsed building, they found two people — a 43-year-old female and a 22-year-old male — unconscious and unresponsive inside. The man was pronounced dead at the scene and the woman was taken to the local hospital, where she later died. “The investigation is ongoing and the Medical Examiner will determine the cause of death. The identification of the deceased is pending family notification,” they said.

At a second flooded location in Queens, the NYPD said they found a 50-year-old male, a 48-year-old female and a 2-year-old male, unconscious and unresponsive, within the residence. They were all pronounced dead at the scene.

Also in Queens, police responded to a 911 call of a flooding condition and discovered a 48-year-old female, unconscious and unresponsive, within the residence. “The aided female was removed by EMS to Forest Hills Hospital where she was pronounced deceased,” they said. An 86-year-old woman also died in her Queens apartment due to flooding, police said.

After responding to a similar flooding incident in Brooklyn, the NYPD said officers found “a 66-year-old male, unresponsive and unconscious, within the residence.” He was pronounced dead at the scene.

On Thursday afternoon, the landlord at an apartment in Flushing, Queens, called 911 to say there were three bodies submerged in a flooded basement, according to the FDNY.

A 19-year-old male was found dead due to flooding at the Rockville Apartments in Montgomery County, Maryland, police said in a news release. Officials received multiple calls for flooding at the home at 3:50 a.m. and 150 residents were displaced by flood waters.

One of those was an unnamed woman who died when a tree fell onto a home in Upper Dublin Township, Pennsylvania, local ABC Philadelphia affiliate WPVI reported.

A fourth Pennsylvania fatality, a 65-year-old man who drowned inside his vehicle after it went into the Unami Creek in Milford Township in Bucks County, state police said in a news release.

In Connecticut, a trooper died after he was rescued when his vehicle was swept away in flood waters in Woodbury, officials said in a press conference Thursday morning without releasing his name. He called for help around 4 a.m. and after a search he was found and hospitalized with critical injuries. He died Thursday morning.

The inundating rainfall Wednesday evening broke records. Central Park reported a record of 3.15 inches of rain in one hour from 8:51 p.m. to 9:51 p.m., the National Weather Service reported.

“All non-emergency vehicles must be off NYC streets and highways,” the city said.

Every subway line in the city was suspended, according to the Metropolitan Transportation Authority, due to so many flooded stations. New York City Mayor Bill de Blasio told ABC station WABC that people were being evacuated from subway cars stuck underground.

“Earlier tonight I declared a State of Emergency in New York State within the counties of Bronx, Dutchess, Kings, Nassau, New York, Orange, Putnam, Queens, Richmond, Rockland, Suffolk, Sullivan, Ulster, and Westchester in response to major flooding due to Tropical Depression Ida,” she said in a statement, also encouraging New Yorkers to “please pay attention to local weather reports, stay off the roads and avoid all unnecessary travel during this time.”

In Passaic, New Jersey, Mayor Lora said Thursday on the confirmed fatality that the person was trapped inside their car, which was “overtaken by water.”

The mayor — who declared a state of emergency in the city — also said that two other residents are reported to have been swept away by the water. The search continues for them.

“We continue to receive reports of incidents that have occurred throughout the city. Vehicles can be repaired, property can be replaced, but loss of life we cannot bring that back,” Lora said.

At the same time, he said, 60 residents are receiving temporary shelter in City Hall.

“We have too many areas where the flooding has gotten so bad that cars are stuck and we have bodies underwater,” Lora said in a video posted to Facebook. “We are now retrieving bodies.”

In New Jersey, Gov. Phil Murphy quickly declared an emergency with 3 to 5 inches of rain falling per hour in some locations across the tristate area.

“We will use every resource at our disposal to ensure the safety of New Jerseyans,” Murphy tweeted. “Stay off the roads, stay home, and stay safe.”

He was not specific about how many people may have been killed or injured in the floods.

At Newark Liberty Airport in New Jersey, a baggage area was flooded and flights were grounded.

“We’re experiencing severe flooding due to tonight’s storm,” the airport’s account tweeted. “All flight activity is currently suspended & travelers are strongly advised to contact their airline for the latest flight & service resumption information. Passengers are being diverted from ground-level flooded areas.”

The U.S. Open, taking place in Queens, New York, had to pause one tennis match as the court was flooded — despite there being a roof over the court — due to rain coming in the side of the stadium.

Several homes were damaged in Mullica Hill, New Jersey, across from Philadelphia, after warnings went out about possible tornadoes.

“Gloucester County has experienced devastating storm damage,” the county said in a statement. “It is likely that multiple tornadoes have touched down within our communities. Our Emergency Operations Center is fully activated with multiple local, county, state, and regional partners assessing damages and deploying resources.”

In Gloucester County, 20-25 homes were “completely devastated,” and roughly 100 more sustained some damage, when a tornado ripped through Harrison Township, Wednesday, the mayor of the Harrison Township told ABC News.

Mayor Lou Manzo said the community is “blessed” that no one died and only one person had to go to the hospital, but the damage to property across the township is “extensive,” he said.

Fire and emergency personnel made “a few rescues” of people who became trapped after sheltering in their basement, according to the mayor.

The Schuylkill River in Philadelphia is rising into major flood stage early Thursday morning and is forecast to rise a few additional feet before cresting around 9 a.m.. The National Weather Service has increased their predicted water level for the river to 17.2 feet, which would be greater than the highest recorded total of 17 feet. The rain has stopped, but flood risk continues, the Philadelphia Office of Emergency Management wrote on Twitter.

Randy Padfield, Pennsylvania’s state emergency management agency director, estimated Thursday the number of water rescues to be in the “thousands” following catastrophic rain and flooding. In Montgomery County alone, officials responded to at least 500 calls, he said in a press briefing.

China’s Brutal Treatment of the Uyghurs

McConnell’s Dream Of Retaking The Senate Is Slipping Away As MAGA...