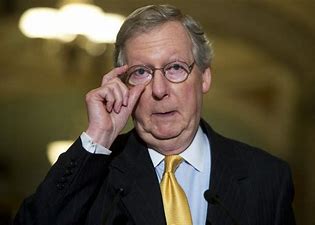 This is a strong statement from start to finish, worth your time if you can spare it. The newsy part comes at the end but he spends most of his remarks detailing how radical Democrats have become in every particular of this debate. The substance of their legislation is radical, enabling abortion up to the moment of birth. Their procedural tactics are radical, gunning to end the filibuster in order to codify Roe and even to pack the Court if they could find 50 votes to do it. Their rhetoric is radical, and not just among Twitter randos. McConnell opens here by remembering the time Chuck Schumer threatened Gorsuch and Kavanaugh over abortion rights. By name.

It’s a culture of incitement with predictable results. He’s right about all of it.

But the news here is him pledging towards the end on the Senate floor, for the congressional record, that he’ll never bend on the filibuster. Not to pass an abortion bill, not to pass any other kind of bill. The filibuster is absolutely sacrosanct.

I understand why he’s saying that, to head off Democratic talking points like this:

WH Press Sec. Jen Psaki says the U.S. is at “serious risk” of having a nationwide ban on abortion. pic.twitter.com/0PTiD1eL2r

It’s not because I doubt that he means it. McConnell’s already proved his seriousness of purpose by refusing to nuke the filibuster when the GOP had control of government and the president himself was leaning on him to do it. I don’t doubt that he thinks it’s good politics too, which it is. Once Roe goes down, the GOP’s excuses for failing to deliver legislatively for its pro-life base will hang by a single thin thread. That thread is the filibuster. So long as it remains intact, McConnell and the party have an excuse as to why they can’t move forward on restrictive national policies that would very likely alienate more voters than they’d win over. The filibuster is the perfect neutral procedural excuse for refusing to “fight.” We’re happy to fight, McConnell’s saying here. But we’re going to fight within the rules.

McConnell is also doubtless hoping that the promise of passing national restrictions on abortion once the party holds 60 Senate seats will light a fire under GOP voters to not just deliver a majority but to run up the score. Just get us to 60, he’s promising implicitly, and you can have what you want. But 60 is a high, high bar even with national politics trending the GOP’s way. The party has never held 60 Senate seats. If McConnell’s majority swells to, say, 57-58 seats in 2025 and Trump ends up back in the White House, do we really think pro-life Republican voters will accept a “too bad, so sad” shrug from Cocaine Mitch about the sacred filibuster?

I want you to imagine for a second the depth of disappointment many pro-lifers will feel after Roe is flushed and they look up in a year to find that … hundreds of thousands of abortions are still being carried out nationally. “We fought for 50 years and nothing seems to have changed,” some will say. “The blue states are almost flaunting how easy it is to get abortions within their borders. If we’re serious about protecting innocent life, we need to use our federal power.”

What will McConnell say to that, realistically? The filibuster is more sacred than … human life? The great social conservative cause that’s united the right since before I was born has to bow to non-constitutional Senate procedural rules at a moment when the White House, both chambers of Congress, and the Supreme Court are controlled by conservatives? Even then, there’s nothing Washington can do to stop California’s endless abortion conveyor belt?

I keep seeing conservatives on social media dismiss the prospect of national restrictions on abortion before the decade is out due to the supposed inviolability of the filibuster and I keep wondering if they’re deluding themselves about what the GOP has become or if I am. Busting norms in the pursuit of conservative victories isn’t just tolerated now, it’s expected. Ron DeSantis is more popular than he’s ever been after having given Disney a taste of viewpoint discrimination and crony capitalism in Florida. Last week Mark Esper alleged in his book that Trump considered lobbing missiles at Mexico to take out drug cartels and Don Jr. boasted about it afterward.

This is a party that expects its leaders to “fight.” And if you’re a fighter and a norm is standing in your way, the norm bends. You don’t.

I’m not suggesting that McConnell himself would bow to populist pressure to nuke the filibuster. What I’m suggesting is that refusing to do so could put his role as caucus leader in jeopardy as pressure from the base mounts. And even if he hangs on, he’ll be forced to rethink his position if the uproar threatens to tear the party apart and debilitate turnout in the next election. Remember, there’s no principle so important to Mitch — or to the country — that he won’t abandon it to avoid landing among a small minority of his members.

Frankly, I’m skeptical that McConnell will still be caucus leader in 2025 either way if Trump is reelected. He’ll be 82. And as much as he enjoys his job in the abstract, I can’t imagine he’d want to try to negotiate a poisoned relationship with Trump for four years. He’ll retire. So we should probably ask John Thune or whichever populist in the caucus is destined to elbow him aside in the next leadership election what *their* views of ending the filibuster to pass abortion restrictions are. They’re the relevant players here more so than Mitch.

.@LeaderMcConnell on abortion: “I will never, never support smashing the legislative filibuster on this issue or any other…Democrats want to wreck our institutions over their fringe position that Americans do not share…The radicals are running the show.” pic.twitter.com/ULKEuK88pv

Roger Stone is Back