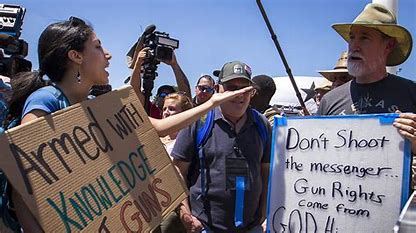 New York is scrambling to pass new concealed-carry laws because of the Bruen case, of course, which nuked the state’s “may issue” permit system. In a “shall issue” system, which most states have, you’re entitled to a permit so long as you meet certain basic objective criteria — U.S. citizen, no criminal record, gun-safety training, etc. In a “may issue” system, even if you check all of those boxes, the state might still refuse to issue the permit because, in its infinite wisdom, it’s decided that you don’t need one.

“Need” is no longer part of the equation, thanks to Bruen. It’s not up to the government to decide whether you need to exercise your right to bear arms, Clarence Thomas wrote for the Court. It’s up to you. It’s a poor “right” that depends on the state’s permission for its use.

So Bruen limits state discretion in deciding who gets a concealed carry permit. Rather than switch to a clean “shall issue” system, though, the New York state legislature is reportedly trying to smuggle a massive degree of discretion back into the permitting process by authorizing state agents to make a judgment call based on … the applicant’s social media accounts. Do you have “the essential character, temperament and judgement necessary to be entrusted with a weapon”? New York officials are going to scroll through your Facebook page and decide.

Which seems problematic in a state dominated by one party, particularly when permit applicants are likely to skew towards the other party, I’m guessing. If your Twitter timeline is an endless series of “TRUMP 2024” and “stop the steal” posts, what might a left-leaning state official conclude from that about your “character”?

The “character” nonsense sounds vague and arbitrary to me at first glance, which means it has a First Amendment problem. And since it’s being enlisted to re-assert state discretion over concealed carry permits, it probably has a Second Amendment problem too.

Among the requirements: Applicants would have to show they have “the essential character, temperament and judgement necessary to be entrusted with a weapon and to use it only in a manner that does not endanger oneself and others,” according to the bill.

And as part of that assessment of good character, the bill says, the applicant has to turn over a list of any social media accounts they have had in the past three years “to confirm the information regarding the applicant’s character and conduct.”

Applicants would also have to provide four character references, take 16 hours of firearms safety training plus two hours of practice at a range, undergo periodic background checks and turn over the contact information of their spouse, domestic partner or any other adults living in their household.

It sounds like New York is trying to build a sort of half-assed red-flag framework onto the front end of the permitting system, denying people a right to carry from the start instead of taking away their right later if a “red flag” emerges. But a true red-flag law requires much more than questionable character: Typically the state needs evidence from cops, family members, or psychologists that the defendant is a threat to himself or others. And that evidence usually requires more than poor “judgment” on a social media account, unless the defendant is posting things like “I’m shooting up a school tomorrow.”

I wonder if New York’s playing a cynical game with this bill, knowing that it’s likely to be a long time before litigation reaches SCOTUS. The state can keep a de facto “may issue” system functioning for years so long as its periodically reformed laws continue to leave space for official discretion in each of their iterations.

Another way the new bill limits concealed carry is by identifying particular locations as “sensitive places.” Thomas’s Bruen opinion endorsed the idea that guns can be restricted in places that have historically been deemed sensitive — “legislative assemblies, polling places, and courthouses,” as well as modern analogues as lower courts may discern. What the state can’t do, he went on to say, is treat the entire island of Manhattan as a “sensitive place.” New York’s draft bill isn’t that broad but it’s prettttty broad:

The ban would apply to places like colleges, hospitals, subways, parks, stadiums and even Times Square — a last-minute addition in the late-night negotiations. It would also extend to any private property, such as a bar, restaurant or home, unless the property owner expressly allows guns, which they can do by placing a sign on their premises…

Legislative leaders and the governor appeared to have reached an agreement on a list of locations where guns would be banned: health care facilities; houses of worship; colleges and universities; places where children gather, such as schools, day care centers, playgrounds, parks and zoos; public transportation; places where alcohol or cannabis is consumed; and theaters, concerts, casinos and other entertainment venues.

So guns are banned in many indoor public places straightaway and in businesses they’re banned by default unless the owner takes the unlikely step of posting a “GUNS WELCOME HERE!” sign. Essentially, the entire state apart from private residences is off-limits. They’re even banned in some outdoor spots, like the entirety of Times Square.

Is that a truly “sensitive place”? Legislatures, polling places, and courthouses are all locations where decisions about government are being made and passions are likely to run high. How is Times Square analogous to that? Is any crowd by definition a “sensitive place”?

Anne: Do you have numbers to show that it’s the concealed carry permit holders that are committing crimes?

There’s some data that shows permit holders have lower crime rates than even police officers. But other evidence finds crime rising in areas where there’s more concealed carry — not because the permit holders are up to no good but because their guns are being stolen by criminals, who then use them to commit crimes.

Only two things are certain. There’s a lot, lot more litigation to come. And this guy is a fool for pointing a gun at his cameraman.

This is an AR-15. A weapon of war. The gun industry is openly marketing these to KIDS. With cartoons and mini JR-15s.

These don’t belong in the hands of our kids or on our streets.

Antifa: The love affairs between the Left and Violence