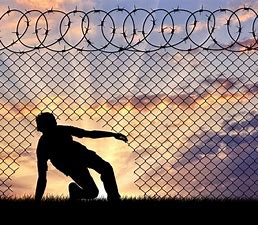 What better proof is there that migrants who illegally enter the United States have no fear of doing so than a group of men who cross into Eagle Pass, Texas, and thank Joe Biden for welcoming them? One of the few reporters covering the Biden border crisis spoke with the group of men from Venezuela and Cuba as they entered Texas. They were full of praise for Joe Biden.

Bill Melugin, a Fox reporter, tweets that the men say they have been traveling for months in very bad conditions.

NEW: I spoke with this group of men from Venezuela & Cuba moments after they crossed into Eagle Pass, TX.
Re: Biden: “A president that is helping us a lot. Very strong.”
Says thank you for receiving us.
Several say they’ve been traveling for months in bad conditions. @FoxNews pic.twitter.com/2zUFLRqxI2

Something seems off here. They all look fresh as daisies. Normally, when migrants arrive on the U.S. side of the border after claiming to have traveled for months, many are scratched up or injured in some way. These men look fully hydrated and their clothes are clean. How did they travel? By bus?

One man, a Cuban, asks Biden to help the migrants. He’d like to go to Midland, Texas, or to Kentucky where he has relatives. He fears the Cuban government. There shouldn’t be any problem getting him a bus ticket or a plane ticket to either location. The Biden administration has been bussing and flying illegal migrants around the United States from the southern border for months. That is DHS’s idea of easing the overcrowding along the border. DHS just moves them away and they can go where they want to go.

This Cuban man tells me re: Cuban government: “There’s a lot of fear, you live with a lot of fear, there’s no democracy, there’s no liberty, there’s nothing.”
Asks President Biden to help migrants. Says he has family in the U.S. in Midland, TX and in Kentucky. @FoxNews pic.twitter.com/BOxU8wawJn

The migrants will very likely be released via a humanitarian parole program implemented by DHS Secretary Mayorkas. Cubans and Venezuelans are both eligible for this program because Mexico will not take them and they can’t be Title 42’d. Migrants from Nicaragua, and Colombia are also eligible. As I wrote about in March, humanitarian parole was once a program rarely used. Now Team Biden has changed that. It is supposed to only be used for urgent humanitarian purposes. Federal law stipulates that humanitarian parole be issued on a case-by-case basis. This administration doesn’t enforce the laws on the books so why would we think they are following the law on humanitarian parole?

So, these migrants knew that they just had to get to the U.S. side of the border and they will be allowed to stay.

Today, Melugin is in La Joya, Texas. Large groups are crossing the Rio Grande River there today. That is something that he has reported in recent days, the size of the groups of migrants crossing into Texas has grown. Yesterday in Eagle Pass the largest stream of migrants he has seen in all his months of reporting on the Biden border crisis crossed into that city. Today the groups are families, single adults, and unaccompanied children. Melugin notes that “cartel human smuggling wristbands litter the ground.”

Good morning from the Rio Grande Valley. We are in La Joya, TX where groups of families, single adults, and unaccompanied children are crossing illegally this AM. Cartel human smuggling wristbands litter the ground. “Entregas/llegadas” = delivered/arrived. Human cargo. @FoxNews pic.twitter.com/hmWbHS01Yu

Biden’s border crisis is a humanitarian crisis. Human beings are being trafficked and drugs are flowing across the border. Cartels are in charge of the border, not Joe Biden or DHS.

On Friday, Senators Cornyn and Cruz will lead a group of their Senate colleagues on a tour of the Rio Grande Valley to survey the border. Senators James Lankford (OK), Joni Ernst (Iowa), John Barrasso (Wyoming), Ron Johnson (Wisconsin), and John Hoeven (North Dakota), all Republicans, will participate.

From a press release by Senator Cornyn’s office:

The Senators will participate in a night tour of the border with law enforcement, an aerial border tour with U.S. Customs and Border Protection (CBP), and meet with local landowners to discuss the impact of the Biden Administration’s open border policies on Texas communities. Additionally, the Senators will receive briefings from the National Border Patrol Council (NBPC) and CBP, as well as the Texas National Guard and the Texas Department of Public Safety (DPS) to discuss federal and state efforts to secure the U.S.-Mexico border. They will also meet with local elected officials.

They will hold a joint press conference in McAllen on Friday after the tours and briefings.