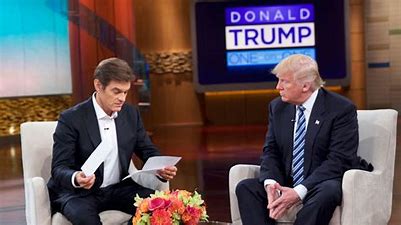 I missed this a few nights ago but it’s worth flagging now since I keep hearing it from populists. “Trump’s endorsement was a mistake.”

How will he pay for this alleged mistake?

One way he might pay, I suppose, is if his endorsement of Oz pushes him over the top in the GOP primary, only to have Oz fumble away the general election to hulking progressive John Fetterman. We could have had Dave McCormick, MAGA types might say.

Except they won’t dare say it. One of the lessons of the disastrous Georgia runoffs last January was that Trump can swoop into a swing state, cost his party *two* Senate seats by suppressing turnout with his rigged-election idiocy, and pay no political price for having done so. Even his puppet candidate in this year’s Georgia gubernatorial race, David Perdue, allows that he lost to Jon Ossoff because Georgia Republicans had been discouraged from voting — while taking care not to say who it was that did most of the discouraging:

Well, now. David Perdue tonight says that he lost his Senate seat because Trump’s election fraud conspiracies kept GA Republicans from voting after they “lost confidence and didn’t come out and vote.” I don’t think Trump will like this interview. pic.twitter.com/Wwtd6gckfv

Fifteen months after blowing two Senate races due to his inability to cope with defeat, Trump is the prohibitive favorite for the 2024 nomination, has raised $110 million for his Super PAC, and is playing kingmaker in Republican primaries.

Convincing Georgia Republicans that their state’s elections are rigged was a far bigger mistake than endorsing Oz in that it ended up handing control of the Senate to Democrats, making possible trillions in new spending and dozens of Biden judges being confirmed. But none of his fans hold that mistake against him. So why wouldn’t he feel comfortable endorsing Oz whether his base likes it or not? What are they going to do about it?

How many of the populists caterwauling about his endorsement would refuse to vote for Oz on principle this fall if he’s the nominee, in order to send a message to Trump, knowing that the Senate majority might depend on getting a Republican elected in Pennsylvania? My guess: Not many.

In fact, now that the MAGA influencer machine is ramping up on Oz’s behalf, in a few months’ time it may be considered a crime against populism *not* to support Oz:

People familiar with the campaign’s operation said they expect a number of prominent Trumpworld surrogates to soon hit the trail with Oz, demonstrating the depth of his MAGA backing. Among them are Ben Carson, who headed the Department of Housing and Urban Development under Trump, and John Fredericks, a conservative talk radio host, both slated to appear at an Oz event next week.

Others close to Trump have tried their hands at lessening the blowback to the Oz endorsement. On Monday night, Fox News host Sean Hannity invited the celebrity doctor on his show to discuss his record, amid a wave of criticism from prominent figures on the right that Oz isn’t sufficiently conservative. Hannity, according to people familiar with the matter, played an outsized role in influencing Trump’s decision to endorse his friend Oz in the first place…

According to people familiar with the matter, those most influential in the decision included Hannity; Trump’s wife, Melania Trump; and Palm Beach friends such as billionaire Steve Wynn. Trump was impressed by the crowds at Oz’s Senate campaign events, and he was aware that McCormick had made negative comments about Trump in the past on video, according to a person familiar with Trump’s thinking.

Trump endorsing Oz because he draws “big crowds” and because Hannity was whispering in his ear to back one of his blow-dried celebrity media buddies is quintessential Trump. MAGA fans will counter that backing a fake nationalist like the doctor is bad for Trump’s “brand,” to which I would respond by politely asking them to consider what Trump’s “brand” actually is. Ross Douthat knows:

The pro-Trump conservatives who howled over the Oz endorsement because they think Oz is a New York celebrity opportunist with mostly liberal views who’s ended up on the right for highly contingent reasons — well, they’re amusing.

Oz is a RINO whose transformation into a staunch MAGA candidate is supposedly implausible, yet the guy who used to cut campaign checks to Hillary Clinton and then invited her to his wedding was somehow the true populist in the race in 2016. There’s no logic to that. Insofar as there’s a meaningful difference between Trump 2016 and Oz 2022, it’s mainly a matter of persona: Trump has always been an alpha-male boor while Oz is a touchy-feely “wellness” advocate. They can both say “build the wall” but only one can really sell it.

As for claims that Trump is “out of touch” with his fans because of one RINO-y endorsement, he’s backed hardcore populist candidates in other races all over the map, including cranks like Kari Lake in Arizona. Just this morning, news broke that he’s headed to Ohio to endorse the opportunistic former Never Trumper J.D. Vance, possibly the most overtly nationalist candidate on any ballot this year and a guy prone to saying base-pleasing uber-douchey populist nonsense like “I think our people hate the right people.” What more do people want?

If endorsing Oz means Trump isn’t perfectly consistent in the ideological tenor of his endorsements, fair enough. But see again Douthat’s tweet above. Trump’s always been playing a part. You can’t fault him every now and then for slipping out of character.

I’ll leave you with this clip of Fetterman to remind you of how stark the choice is in Pennsylvania this fall.