The group, known by its Indonesian acronym FPI, was disbanded last year as a mass organization. But it had continued to carry out activities that violate order and security, Mahfud said.

The government also prohibited the use of the FPI symbols and attributes.

What is the Islamic Defender’s Front?

The FPI was formed soon after fall of former Indonesia strongman Suharto in 1998.

The FPI were notorious for raiding bars and brothels and intimidating religious minorities.

The group gained significant political and social influence in recent years through humanitarian and charity work.

It was a key organizer of massive street protests in 2016 and 2017 against the Christian governor of Jakarta, who was subsequently imprisoned for insulting Islam.

Why was it banned?

Deputy Justice Minister Edward Omar Sharif Hiariej said on Wednesday that the FPI was outlawed because nearly 30 of its leaders, members and former members had been convicted on terrorism charges.

He said the group conflicted with Indonesia’s state ideology, known as Pancasila, which emphasizes unity and diversity. 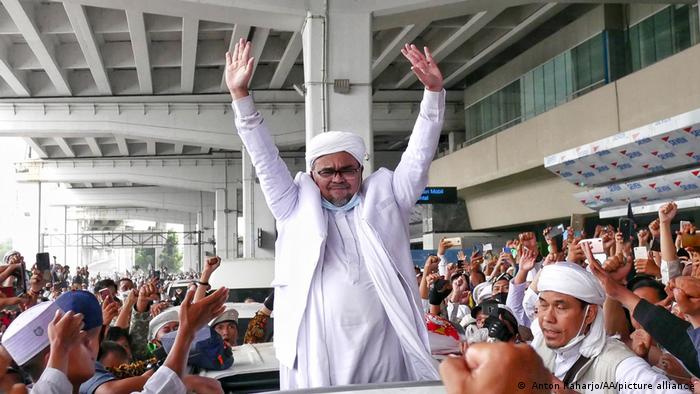 The move to ban FPI follows the arrest of the group’s spiritual figurehead, Islamic cleric Rizieq Shihab earlier this month.

Shihab turned himself over to police after holding large events to celebrate his return from a three-year self-imposed exile in Saudi Arabia. The events breached coronavirus pandemic restrictions.

His return has fueled concerns within government that he could be angling to harness opposition forces.

Trump Is the ‘Domestic Terrorist of the 21st Century,’ Like Timothy McVeigh

Politics January 15, 2021
The title of the page
Go to mobile version