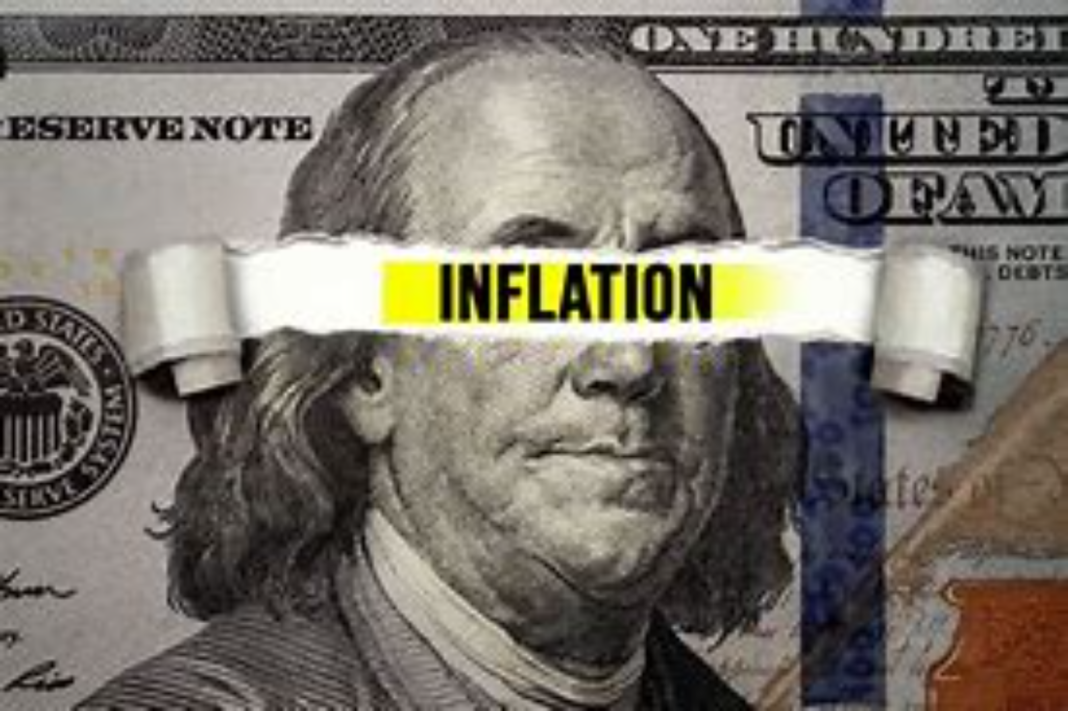 Dear Daily Signal: I don’t know what a “high-class problem” is supposed to be, per David Harsanyi’s commentary (“Biden White House Will Pay for Playing Inflation Games“). My wife and I are decidedly middle class and we live frugally. Nonetheless, prices at the gas pump continue to increase and grocery goods are difficult to obtain.

We may shop and fill two shopping bags, but are still spending upward of $100 at a time. I don’t think the rich are as affected as we “low class” people are.

If the late economist Milton Friedman was correct that “inflation is too much money chasing too few goods,” all this government subsidy for people not to work is making it worse. Not only are they pumping money into the consumer sector, they are discouraging employment in the production sector.

Approximately 3 million jobs are going begging, simply because employers cannot pay enough to make it worthwhile for people to shake off their indolent lifestyle and get back to work. We have to repeal the $15 minimum wage and put an end to extended unemployment benefits.

Until we become a productive economy again, we have no hope of recovery. My wife and I certainly have not lived this long and worked as hard as we have to watch our country sink under the weight of bloated Democrat social programs.

And while I’m on the subject, I saw a video a couple of days ago of a Senate Democrat denouncing the Trump tax cuts as irresponsibly reducing revenue before cutting spending. When has anyone ever seen Congress eliminate spending programs? I can’t remember anything like that. It’s spend, spend, spend.

Not that long ago, Paul Ryan and other lawmakers floated the idea that tax cuts should be tied to spending cuts, but to nobody’s surprise that went nowhere. Congress, led by the Democrats, is spending us to death.—Morgan Spector, Lancaster, Calif.

Dear Daily Signal: As David Harsanyi’s commentary article states, the retirees are going to be the ones hurt (“Biden White House Will Pay for Playing Inflation Games“).  I was in the Air Force then, so the stagflation didn’t affect me.  It was President Carter’s lack of world leadership that concerned me then. Now I’m retired, and I am worried.

I could see the shortages in March and April 2020.  Slowly, as the year wore on, the shortages pretty much stopped.  But since then, the Biden administration has mucked up everything.

The left is very adept at saying things that sound great, and make an individual feel like a heel if they don’t go along. It is apparent from history that these ideologues do not care about people’s suffering, only that they implement their policies.

The Heritage Foundation would do well to publicize loudly, over and over, how inflation destroys those on fixed incomes. Heritage has a bigger voice than I by far and is a highly respected organization.

The retired and elderly form a formidable voting bloc in this country and, when motivated to go to the polls, can do a great deal to help right our sinking ship. This Biden administration is the enemy of every senior citizen. That message needs to be used as motivation.

Our nation’s future is at greater risk today than anytime since the Civil War.—Wayne Peterkin, Evangeline, La.

The supply chain issue has been an emergency for over a year and a half now. It is getting dire, closing in on catastrophic. Joe Biden hasn’t helped much, but this problem started under the watch of Donald Trump.—Dan Wall

Dear Daily Signal: As usual, Victor Davis Hanson has expressed my sentiments exactly. Conservatives are appalled at what has happened to so many important bastions of American culture and government (“Losing Confidence in the Pillars of Our Civilization“).

Hanson touches on the botched COVID-19 response, but doesn’t really attack the scientific community. As a registered nurse since 1963 and a supporter of science for all my life, I now see science being trampled.

Science is never “settled.” It is an ongoing study. However, the left would have you believe that climate change is a real concern and is attempting to change our total way of life, from driving electric cars to reducing beef raised for food to heating our homes. Biden’s attack on the oil industry, costing billions of dollars, will be paid for by all of us.

The “science” that confirms males can transform into females is totally insane. There always have been two sexes and always will be. It is proclaimed in our DNA. To change important policies for those who are confused is ludicrous and flies in the face of science.

Another disturbing outcome of liberal science-deniers are the policies surrounding government’s vaccine mandates. As health care students learn when they train for their profession, once an individual contracts a virus, he has natural immunity. Vaccine mandates, however, deny this fact.

Nurses, doctors, and other health care workers who have had COVID-19 and recovered have natural immunity; they don’t need to take the vaccine. Yet many are being fired for refusing to do so.

Additionally, forcing an experimental vaccine, or any vaccine for that matter, on Americans is against our civil liberties. I especially fear for our young people and children being forced to take the vaccines.

The elderly and those with comorbidities are the ones susceptible to the terrible outcomes of the coronavirus. Younger individuals generally are not. Studies show that if children contract the virus, they usually have much milder symptoms and recover quickly

Finally, I fear that vaccine mandates are a way to gain control of the American people for monetary gain for a select few who are pushing it, as well as Big Pharma.

So, while my faith in science hasn’t faltered, my faith in the scientific community has. Until we can have honest dialogue regarding scientific issues, we never will have true science.—Dianne Watson, RN

These processes are in place for a reason. They help determine the effects of any proposal that on the fiscal responsibility of the federal government.

Taxation is the primary vehicle for providing the funding necessary to put forth any objective, whether that objective is beneficial or only folly. The subterfuge that the House is attempting to perpetrate is an example of this folly.

Being spendthrift with your own money is foolish. When you attempt to do the same thing with taxpayer dollars, in the guise of providing our future benefit, is criminal.

The fact that the House is unwilling to allow a transparent examination of the complete spending bill is endemic of a scam.  It is an obvious subversion of lawmakers’ sworn duty to act in accordance with what is best for the American people, instead of special interests. And it is a blatant attempt to maintain the enormous power they hold over the electorate.—Howard Tarantino

Regarding Chad Wolf’s commentary article on illegal immigration and Homeland Security Secretary Alejandro Mayorkas, our country is being flooded with people who will be indebted to the Democratic Party for their practically unopposed entry into the United States (“6 Takeaways From Mayorkas’ Shameful Senate Panel Testimony on Border Security“).

Our cities, into which the majority of these so-called refugees are being crammed, are already a simmering environment of rampant and increasing crime, hunger, disease, and poverty.

The Republican Party is letting go of an opportunity to turn illegal immigration into a daily report to Americans on how the Biden administration is turning this country into a Third World entity. The Democratic Party obviously has given up what was created in 1776  for a vision of a refugee center for so-called victims worldwide, administered by Democratic politicians.

The border crisis is one of the Biden administration’s efforts to build its power to control our lives by ignoring our immigration laws and using illegal immigration as a means to dictatorial power.

Questions to ask Mayorkas include:

—Is there any limit in your mind, and the president’s, on how many of these people are becoming “refugees” solely to gain entry to the U.S. through illegal means?

—How many so-called refugees can be admitted before our resources, already adversely affected by the needs of our current population, cannot support the infrastructure and level of investment needed to maintain our country?

—Why is the Biden administration secretly flying illegal immigrants into our states without any contact with the governors or concern for legal citizens’ wishes, safety, and welfare?

The administration could be turned out of power solely on the immigration issue alone, if it were addressed in a way that highlights what our nation is being turning into.—Gaylord Yost, Milwaukee, Wis.

I usually agree with policy positions taken in The Daily Signal, but other than ending the unnecessary “gimme” for hospitals, I have to disagree on this one from Robert Moffit (“Democrats Ponder Cutting Medicare Advantage to Fund $3.5 Trillion Spending Bill“).

Medicare spending will grow as the population ages. Medicare Advantage plans would not be competitive were it not for the corrupt government subsidy they have received from Day One.

So what are some solutions to the cost equation? End the cap on Medicare contributions while working. Eliminate the certificate of need for all health care providers except hospitals, so there could be real competition among providers. End the Clinton-era folly of hospitals—and now venture capital firms—buying up doctors and surgery centers, which encourages monopolies and charge fixing.

Allow Medicare to negotiate the price of prescription drugs. Directly address the sugar and salt content in processed foods, a leading driver of diabetes and high blood pressure. End the demographic folly of unlimited immigration from unhealthy Third World countries.

Get children off long school bus rides and into physical activities in their own neighborhoods, so we start to break the nightmare of childhood obesity created by misplaced government intervention. The list is endless.—Paul Levy, Carolina Beach, N.C.

How Are We Doing?

Dear Daily Signal: Your topic selection and reporting is top-notch. I am so grateful there is a voice digging into the issues beyond the surface and truly educating any willing reader about the facts of each matter.

I commend your reporting and reporters for their diligence and targeting major issues and making thoughtful analysis accessible to the general public.

I have become conscious in recent years that those of us who grew up in a free society and had the benefits of a solid academic education have become “the silent majority.“ But that isn’t what my parents were. They often wrote letters to their congressman in support of, or against, particular issues.

I know that is what my generation and following generations must do more of—not just at the ballot box—in order to effect change. Perhaps current events will wake citizens up, in a true sense of that phrase.  It is the call to support liberty in the spirit of 1776.

Please keep up the good work. Hopefully, it will wake up our citizenry to what is happening and any action needed.—Vicki Hoff

You ask how are you doing. I think you are doing very well.

You are practical, down to earth, and make an awful lot of sense. Don’t stop. Someone needs to listen, i.e. the federal government. They are amiss and need guidance, big time.—Pierce Smith

Just want to say thanks for your daily emails and reports. They are informative, thought provoking, and timely.