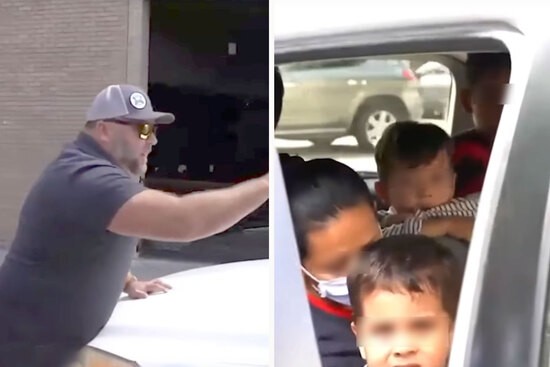 In video that was posted by Hernandez and subsequently taken down on many sites, Jones can be seen in the middle of the afternoon on a McAllen street, standing and screaming at the occupants of a white minivan. Jones calls for the police while Hernandez points out that the children aren’t wearing seat belts and don’t have car seats. “No car seats. What organization is this? I want to know who the hell this is,” he demands. The Daily Dot reports that later in the video, in classic charlatan nonsensical histrionics, Jones yells, “If I drove around with three of my kids in the back of the car, I’d get arrested.” That’s not the law in Texas, to be clear. Also, Alex Jones not being allowed to drive with children might be more related to the fact that he’s had questionable judgement when driving.

Sister Norma Pimentel, executive director of the Catholic Charities of the Rio Grande, released a statement to reporters saying the video misrepresented what was happening. These children were not being “smuggled” anywhere; they were being driven from one place to another to receive some help from an organization that works to ameliorate poverty conditions for families. Pimentel did, however, say that the children should have been wearing seatbelts, but “unfortunately, this was not the case.”

“I urge you to look past the fear-mongering and mischaracterizations,” said Pimentel. “Remember to actually see the human beings fleeing persecution and their need for human dignity, which mirrors our own.”

Jones has long wrestled with clear personal issues. He is a bad person who has frequently preyed upon families in order to make his money. In recent years he has lost lawsuits filed by parents of children murdered at Sandy Hook Elementary School for promoting the truly horrific conspiracy theory that the whole thing was made up and the parents were “crisis actors” pretending for years and years to have lost their children. To be Alex Jones is to be lost in the heart of darkness. Donald Trump’s mediocre mind and his popularity among the conservative movement created fertile ground for Jones and others to exploit the more openly white supremacist members of the right wing.

Rents Are Out Of Control For Many Americans, the demonrats will...