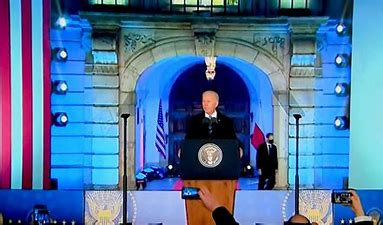 Several weeks into the war in Ukraine, ABC’s George Stephanopoulos asked President Joe Biden if he agreed with those who call Russian President Vladimir Putin “a killer.”

Since calling Putin a killer, Biden has progressed to calling him “a war criminal,” “a murderous dictator,” “a pure thug” and “a butcher.”

It is difficult to recall an American president using such a string of epithets about the leader of a nation with which we were not at war.

What is Biden’s rationale? What is his purpose here?

Franklin D. Roosevelt and Harry Truman, to their eternal embarrassment, called Joseph Stalin, a far greater monster than Putin, “good old Joe” and “Uncle Joe” when they sought his cooperation in World War II and the early postwar era.

Richard Nixon toasted the century’s greatest mass murderer Mao Zedong in the Great Hall of the People during his historic trip to China in 1972. His purpose: establish relations with America’s most hostile adversary — to help Nixon advance a “generation of peace.”

But when it comes to depicting Putin, who launched this invasion of Ukraine, Biden repeatedly reaches for the nastiest of insults.

“Putin deserves it,” say the champions of a Cold War II. We need more truth and candor in diplomacy. When Biden referenced Putin in the closing remarks of his address in Warsaw, Poland — “For God’s sake, this man cannot remain in power” — they were elated.

Biden was calling for regime change in Russia, calling for the people of Russia to administer to the “killer” and “butcher” the fate he deserves and remove him from power by any means necessary.

Biden was expressing his “moral outrage” at the carnage Putin has unleashed on Ukraine, they said — and not making a change in U.S. policy.

For days, the president and his advisers argued over whether Biden had meant it literally when he said, “This man cannot remain in power.”

Sunday in Jerusalem, Secretary of State Antony Blinken sought to shut down the argument:

“As you know, and as you’ve heard us say repeatedly, we do not have a strategy of regime change in Russia or anywhere else, for that matter. In this case, as in any case, it’s up to the people of the country in question. It’s up to the Russian people.”

One problem with Blinken’s statement is that the U.S. has been deeply involved, both during the Cold War and afterward, in “color revolutions” to effect the overthrow of autocrats we did not like.

Indeed, when Biden characterizes America’s cause in the world as leading the global struggle between democracy and autocracy, what is the desired and predetermined fate of the autocrats we oppose, if not their forcible ouster?

In 2014, the U.S. helped finance the Maidan Revolution that ousted a democratically elected president, Viktor Yanukovych, in Kyiv. Sen. John McCain and the State Department’s Victoria Nuland had both been seen in the square cheering on the rebels.

A second problem is that Putin is many things other than the terms Biden used to describe him.

He commands the largest nuclear arsenal on earth and 10 times as many battlefield nuclear weapons as the U.S. military. He is the man we must look to if we hope to end the war in Ukraine. For Putin alone can order the Russian army to stand down or withdraw, presumably a goal of U.S. foreign policy.

If the president of the United States is the most powerful man in the world, Putin is up there alongside him, disposing of an arsenal of intercontinental ballistic missiles that could bring an end to Western civilization.

Without Putin’s cooperation, the bloodletting goes on in Ukraine.

How does it advance the goal of getting his agreement to end the war in Ukraine for the U.S. president to repeatedly call him vile names?

Already, we have paid a price.

Secretary of Defense Lloyd Austin and Chairman of the Joint Chiefs of Staff Gen. Mark Milley are finding their secure phones to their opposite numbers in the Russian government have gone silent.

Defense Minister Sergei Shoigu and Chief of the General Staff of the Armed Forces Valery Gerasimov have not been picking up the phone.

In Moscow, there is talk of severing diplomatic relations with the United States because of Biden’s name-calling.

None of the aspiring peace-makers seeking to broker a cease-fire or truce in the Ukraine war are acting like this or using language like that.

President Emmanuel Macron of France, President Recep Erdogan of Turkey and Prime Minister Naftali Bennett of Israel have not used the kind of public language on Putin as has Biden.

We see the cost of what Biden is doing; wherein lies the benefit?

MSNBC’s Joy Reid is having a serious ratings problem