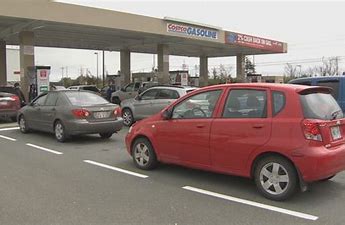 Yes, we know. So does the White House and Joe Biden, who deliberately set those signals and might have even bragged about their results, had his fantasy energy ambitions come true. Instead, Biden’s blathering about corporate greed, while even normally sympathetic media outlets like the Washington Post are putting two and two together:

The futility of the White House effort came through in the response to letters President Biden sent this week to the nation’s major oil companies, chastising them for squeezing “historically high profit margins” out of their refineries. “At a time of war, refinery profit margins well above normal being passed directly onto American families are not acceptable,” Biden wrote. Biden threatened to invoke emergency powers if the companies don’t bring prices down.

The companies are unmoved. The profits follow years of heavy losses at many facilities after demand plunged during the pandemic. Unpredictable shifts in oil markets had created a challenging business climate before that. Even at this moment of windfall refinery earnings, when the profit margin on each barrel of oil processed has jumped from a dollar or two a year ago to as much as $18 today, investors are hardly jumping at the opportunity to enter the sector. They fear the profits are short lived. The administration’s environmental priorities — as well as rising public and corporate concern about climate change — would make many refineries obsolete in the not-too-distant future.

Building and upgrading the mammoth structures is a messy, expensive undertaking that can drag on longer than a decade, strain the finances of even the biggest fossil fuel giants and run the risk of getting abandoned before that investment is returned. …

The last major refinery to come online in the United States, in 1977, is the one owned by Marathon Oil in Garyville, La. It is capable of pumping out 578,000 barrels per day. Since it opened, more than half the refineries in the United States have closed.

And why is that? And why haven’t we built more refineries? It’s not because the demand for gasoline has slaked off over the last 45 years, certainly. It’s because environmental activists have demanded more and more restrictions, with much higher costs, for building new refineries. Both Barack Obama and Joe Biden have amplified that hostility into regulatory policy. Joe Biden got elected while declaring that he’d block any new drilling, shut down pipeline construction to refineries, and start shutting down the oil and gas industries altogether.

Would you invest any serious long-term capital into the oil and gas industry in that political environment? Of course not, especially after Biden made good on his campaign promises in his Executive Order 13990. If the oil and gas companies are “unmoved” by the potential demand, it’s because policies and regulation like this make it clear that any investment in expansion for fossil-fuel production and refining will end up getting destroyed. And deliberately so, as Energy Secretary Jennifer Granholm admitted last week on CNN:

This clip is ASTONISHING.

Energy Sec. @JenGranholm demands energy companies to make massive investments to increase oil supply while simultaneously saying they want to shut them down over the next 5-10 years.

WHAT IS THIS WHITE HOUSE?! pic.twitter.com/CTgC4dk92x

GRANHOLM: What we’re saying is today we need that supply increased. Of course, in five or ten years – actually, in the immediate, we are also pressing on the accelerator, if you will, to move toward clean energy so that we don’t have to be under the thumb of petro dictators like Putin or at the whim of the volatility of fossil fuels.

Ultimately, America will be most secure when we can rely upon our own clean, domestic production of energy through solar, through wind, through –

BERMAN: But that’s the problem for these companies. These companies are saying, you know, you’re asking me to do more now, invest more now, when, in fact, five or ten years from now we don’t think that demand will there be [sic]. And the administration doesn’t even necessarily want it to be there.

Small wonder that they’re putting profits back into the companies via stock buybacks, when they’re not just paying out dividends. No one will sink money into building a new refinery when it will take the better part of a decade just to jump through the regulatory and environmental hoops erected by Biden, all while Biden and his successors keep fighting to end the entire industry.

By the way, the oil and gas industry does have a plan to revitalize and expand their ability to deliver gasoline. The American Petroleum Institute, the industry’s interest-group non-profit, released a ten-point plan that would allow for much higher capital commitments to extraction and refining, as well as support for a comprehensive all-in energy policy that includes renewables. In case anyone wants to keep asking, “where’s your plan?”, well, here it is:

Given global circumstances, it is time for an energy awakening – for the natural gas and oil supply chain and the government at all levels to open a new era of working together to ensure that essential energy resources are unlocked; to encourage investment opportunities and accelerate infrastructure development; and to strengthen global energy security, affordability and reliability.

Bottom line: Washington policymakers must confront the global mismatch between demand and supply that has driven higher fuel prices by supporting greater U.S. production. To address the growing crisis we face, Congress and the President must support energy investment, create new access and keep regulation from unnecessarily restricting energy growth. The world is calling out for energy leadership. America can and should step up fast.

Will Biden and Granholm act to support this? Not on your life.