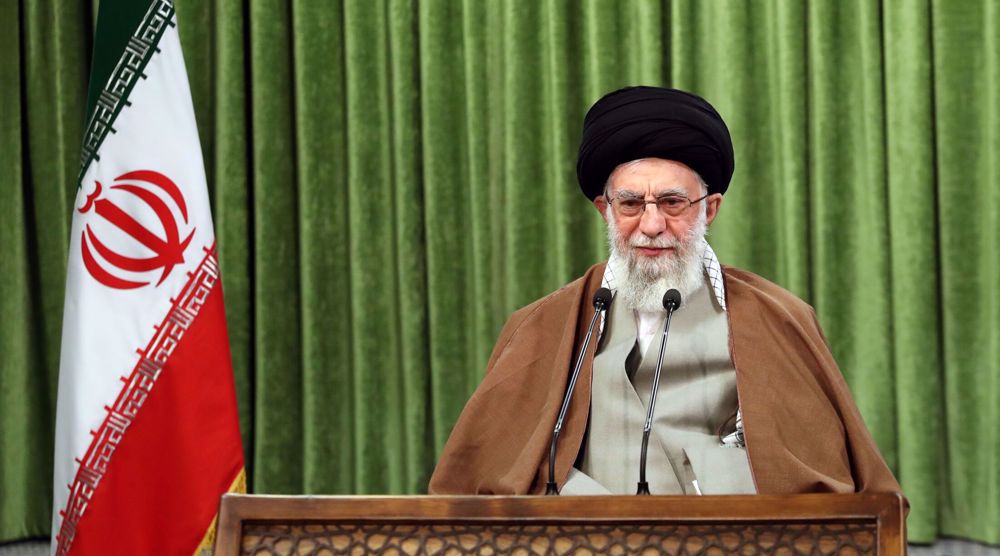 Ayatollah Seyyed Ali Khamenei made the remarks in his New Year speech on Sunday one day following his Nowruz congratulatory message during which the Leader designated the new Iranian calendar year as the year of “Production: Support and the Elimination of Obstacles.”

Reflecting on the current standoff between Iran and the US over the implementation of a nuclear deal clinched by Iran and six world powers, officially known as the Joint Comprehensive Plan of Action (JCPOA), the Leader emphasized that the so-called “maximum pressure” policy adopted by the former US administration of President Donald Trump toward Iran after leaving the JCPOA has totally failed.

“The previous fool had designed the ‘maximum pressure’ [policy] in order to corner Iran and take Iran to the negotiating table and impose his arrogant demands on a [presumably] ‘weak’ Iran. However, he disappeared [from the political scene] in such a way that both himself and his country were disgraced while the Islamic Iran is standing fast and proud,” Ayatollah Khamenei said.

“They must know that the enemy’s ‘maximum pressure’ [policy] has failed and if the current American government wants to pursue the maximum pressure [policy] again, it will also fail and disappear [from the political scene],” the Leader emphasized.

The Leader stated that Iran’s policy for interaction with other parties to the JCPOA has been announced clearly and Tehran will never give up that policy, because there is consensus on it inside the country.

“Americans must lift all sanctions first and then we will verify and if they are truly lifted, then we will return to our [JCPOA] commitments without any problem. We cannot trust the Americans’ promise,” the Leader said.

Referring to recent claims by some American officials that the JCPOA and its conditions must change for the US to return to it, the Leader said, “Yes, conditions are now different from what they were [during Iranian calendar years 13]95 and 96; however, they have not changed in favor of the United States, but in our favor. Iran has become much stronger since 94 (2015). Therefore, if the JCPOA is going to change, it must be in Iran’s favor.”

“You have been facing increasing problems and the fate of this new [US] president is not clear either. We are in no hurry. Yes, we also believe that opportunities must be taken advantage of, but we will show no hurry, because in some cases its risks outweigh the benefits. We acted hastily on the JCPOA,” Ayatollah Khamenei said.

“We are patient and we are doing our job. If they accept the policy that we have explained, well, everything will be alright; if not, this existing situation will continue and there is no problem with it,” the Leader noted.

“We trusted Americans during [tenure of former President Barack] Obama and we took steps that we had to take under the JCPOA, but they did not fulfill their commitments. On paper, they said sanctions were lifted, but any company that wanted to enter into a contract with us was alarmed by their agents that this could be risky… Therefore, we do not trust them and their promise is of no value to us,” Ayatollah Khamenei said.

The future of the JCPOA has been in doubt since the US pulled out of the agreement and imposed the “toughest ever” sanctions on Iran as part of his so-called “maximum pressure,” which tried in vain to force Iran back to the negotiating table for talks on a “better deal.”

Despite throwing verbal support behind the JCPOA, the European parties to the deal — France, Britain and Germany — have succumbed to Washington’s pressure and failed to fulfill their contractual commitments under the agreement to protect Tehran’s economic interests.

That promoted Tehran to begin a set of retaliatory measures in several stages as part of its legal rights stipulated in Articles 26 and 36 of the JCPOA. The latest such measure was the halt in the implementation of the Additional Protocol, which was required by the parliament-adopted law.

Joe Biden, the current president of the United States, has spoken of a willingness to return his country to the Iran deal, but, in practice, his administration has so far been sticking with Trump’s futile pressure campaign. Washington says Tehran should return to full compliance with the deal before the US does so.

Iran says the US needs to take the first step to lift the bans to prove its good will as it was Washington that quit the agreement in total disregard for the international law.

Iranian officials say if Iran can verify the sanctions removal, it will stop its measures taken based on Article 36 of the JCPOA.

An informed security source told Press TV earlier this month that there will be no negotiations between Iran and the United States on any matter before Washington removes all illegal sanctions it has unilaterally imposed on Tehran.

In another part of his remarks, the Leader stated that sanctions and economic blockade imposed on various countries by certain world powers are criminal acts, which have nothing to do with diplomacy and real politics.

Ayatollah Seyyed Ali Khamenei made the remarks in his New Year speech on Sunday one day following his Nowruz congratulatory message during which the Leader designated the new Iranian calendar year as the year of “Production: Support and the Elimination of Obstacles.”

Sanctions that prevent import of drugs, foods, and medical supplies are really a crime, which can only be committed by some powers, especially the United States, which has killed thousands of people in a single day, the Leader said.

“Although the US economic sanctions were a crime against the Iranian nation, they caused Iran to reduce dependence on other countries,” the Leader said, emphasizing that the Iranian youth have already managed to turn sanctions into an opportunity, by taking steps and producing needed goods inside the country.

“Sanctions turned into a lesson for us as they prompted us to find a way to thwart the impact of economic bans,” Ayatollah Khamenei said.

Ayatollah Khamenei noted that one of the problems nagging the Iranian economy in the past couple of years was making economic planning conditional on lifting of sanctions or attracting foreign investment, which has kept the country’s economy in a state of confusion.

The Leader also explained the year’s slogan of “Production: Support and the Elimination of Obstacles,” noting that although last year’s slogan, which was growth in domestic production, was not achieved in full, the goal was relatively realized as production of various kinds of essential goods produced in the country really increased.

The Leader stressed that one of the most important steps to be taken for the promotion of domestic production was removal of the existing hurdles to production, including banking obstacles, while the fight against corruption, which the Leader described as “a very important issue,” must continue.

Ayatollah Khamenei further noted that in addition to the above steps, measures must be taken to boost people’s purchasing power, so they would be able to buy domestic productions, and cut the hands of middlemen who raise price of various products for their own benefit.

The leader mentioned powerful anti-corruption management as a major factor to pave the way for domestic economic boom.

The Leader then quoted international experts and reports released by international economic organizations, including the World Bank, as saying that despite all difficulties, the Iranian economy ranks 18th among world economies and if a number of obstacles are removed, it could even rank 12th.

Ayatollah Khamenei then added that Iran enjoys huge territorial and human resource capacities by relying on which the country would be able to achieve its deserved standing among global economies, “in the event of correct economic planning and powerful management.”

Elsewhere in his remarks, Ayatollah Khamenei warned that intelligence services of some countries, particularly the United States and the Zionist regime (Israel), have been plotting to undermine the upcoming presidential election in Iran and reduce its vibrancy.

Ayatollah Khamenei said enemies are leveling accusations against officials in charge of holding the election and also the Constitutional Council while making efforts to discourage the Iranian nation, adding that they are taking advantage of the cyberspace to achieve their goals.

“It is no cause of honor [for us] to leave the cyberspace to enemies. All countries take measures to manage the cyberspace, but we take honor in having let it loose! The enemy takes advantage of this [virtual] space to reduce people’s participation in elections through psychological methods,” the Leader noted.

Ayatollah Khamenei added, “The cyberspace must be managed. There is no doubt that this possibility must be used by people and it brings freedom to people. It is also very good. However, this means must not be made available to the enemy to hatch plots against the country and against the nation.”